The weather today was just right for burning the last of the garden debris. Temperature in the upper thirties with a light wind blowing south so the smoke and sparks would flow out over the garden and not toward the house.
After I raked the dry zinnia stalks into a pile and then pulled up the soggy cardboard mulch, I twisted a piece of newspaper and shoved it in the driest part. One match later, smoke curled up from the edges of the haphazard pile and then twisted as the wind picked up. That wind was important for getting the wet cardboard to burn, and soon I had a roaring fire.
I could see vehicles pausing as they raced down the road a quarter mile across the field in front of my house. Wet debris burns with a great deal of smoke, and I'm sure the drivers were wondering what was on fire. I considered trying to send some smoke signals to let them know everything was under control, but had to be content with the fact that I was wearing a blaze orange hoodie, and they could probably see me moving around from the road.
In an hour, the pile was reduced to fine ash, a perfect supplement for spreading out on the garden to add minerals to the soil. 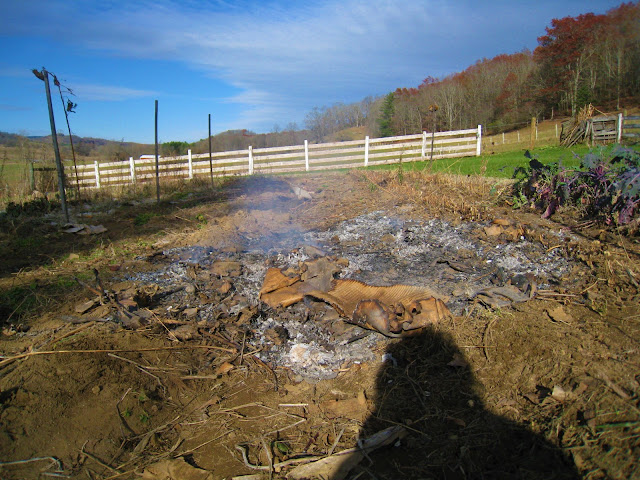 As I sat there, with the last of the heat warming my face, I heard a small whistle and then a fluttery beating of wings. A gray-backed, butternut-chested, tufted titmouse landed on one of the sunflower plants drooping on the edge of the garden and studied me. I think he was hoping I'd leave. My bright orange coat must have puzzled him. 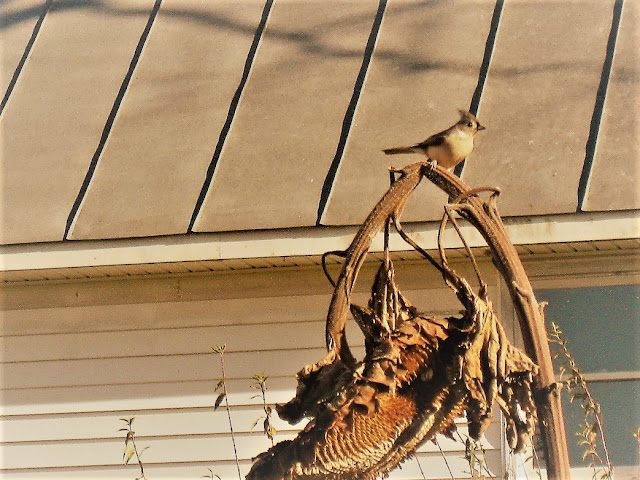 I did leave, but returned a minute later with camera in hand. It took the curious little bird and his twitter-pated cousins about fifteen minutes to decide that the big orange blob sitting under the stalks was harmless.
Soon, the air was full of fluttering and singing as the little birds gathered enough courage to land on the burgeoning heads and dig for seeds.
I think that there can't be anything more perfect than sitting in the golden light of a fading fall afternoon and watching nuthatches dig into sunflower heads, tossing debris left and right as they pry out their supper.  As soon as a seed was firmly pinched between upper and lower bill, the little birds leaped into the air and in their peculiar up-down, up-down manner of flight made their way to the wooden slats of the grape vine where they, tap, tap, tapped until they broke open their particular seed. 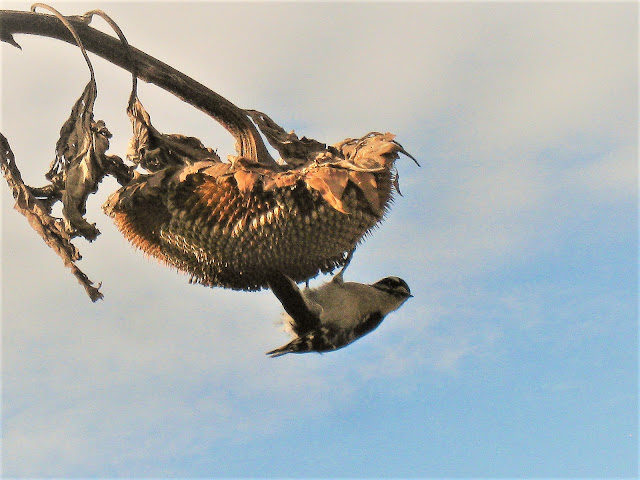 As more birds discovered the bounty, some jostling and flapping helped establish the pecking order. 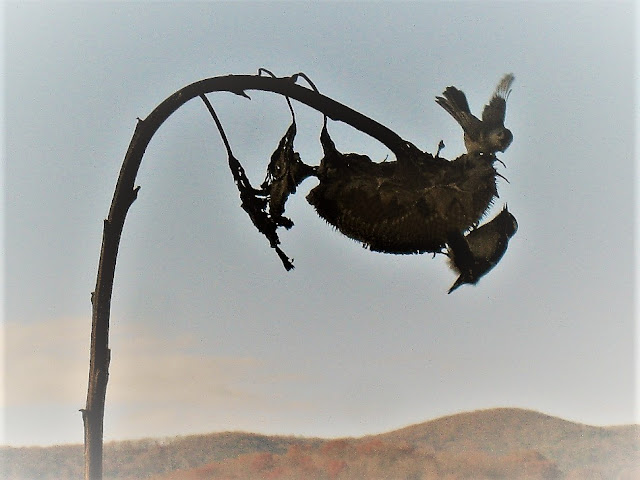 I watched the show for as long as my rear end could handle the cold ground. Before leaving, I took a look at the bird's handiwork. There were still enough seeds left for another day or two of fun. 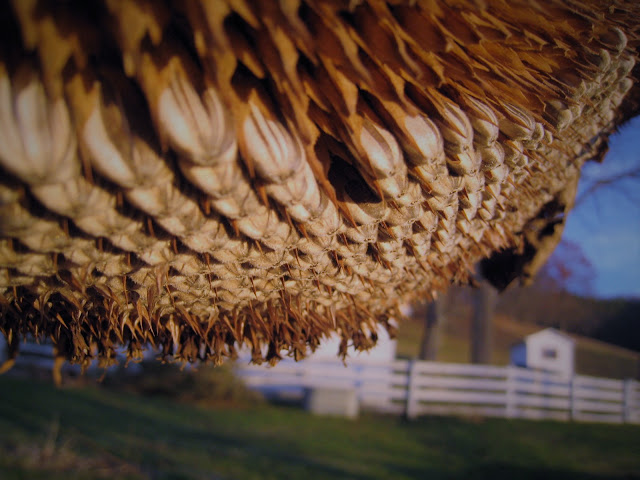 I gathered a few for myself and then slipped inside to warm up by the woodstove. Even five hours later, my shirt still carries the sweet scent of smoke. Today, I stored up a treasure of memories against the day in the future when I can no longer sit on cold ground and watch earnest little birds making a living in the remnants of my summer garden.
Posted by Ginny Neil, The Singing Farmwife at 5:37 PM