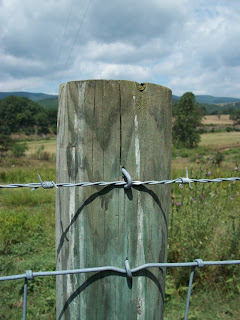 After enjoying a leisurely lunch with a couple of old friends, I came home and visited my backyard gym, which is what I call the mountain behind the house.


﻿﻿ I took the long path home, pausing at the top of my driveway to watch for Joe who had gone for a load of water. The garden threatens to blow away in the dry weather so he’s been trucking three hundred gallons a night to it. I heard the old truck before I saw it, so I scrambled down the hill to meet him. When I climbed in the truck, Joe told me the cows were in the meadow tearing apart the freshly rolled bales. When the grass is short the cows bully their way through weak spots in the fence and Joe was headed over to put them back in the pasture. I agreed to go along and help. Being Joe’s extra hands is one of my favorite things to do.
The sun had just slipped behind the mountains when he pulled the four-wheeler out of the barn. I hopped on behind, hugging him tightly, and we rumbled across the pasture to the offending cows. They watched us ride up and open the gate and then, when Joe dropped me off and zoomed around them, galloped through the opening, kicking their heels up as they went by. It didn’t take us long to discover the cows’ entrance. A section of fence had popped loose and was sagging enough for the cows to jump it. It would have to be re-stapled. Joe said the only way to keep the cows out of the hay meadow while we worked was to feed them a bale of hay, so he fired up the John Deere while I drove the 4-wheeler back up to the house for fence staples and a hammer.
When the bale was unfurled and all the cows were lined up for supper, we went back to the fence to stretch and staple the wire back to the posts. After 24 years on the farm, you’d think I would remember to dress for the job, but I was in shorts and clogs so naturally I snagged my leg on some barbed wire in the process. I don’t think I’ve ever gone through a summer without some farm-related scar to mar my legs or arms. I even got married in August in a long sleeve dress because I’d been in the hay field and my forearms were covered with hay pricks.
When the fence was stretched tight and the electric wire reattached, we called it a job well done. Joe sat on the four-wheeler first and I swung my legs over and around him. The sky was dimming and the air was cool as I leaned against him for the ride. The fireflies blinking in the meadow lit our way home. 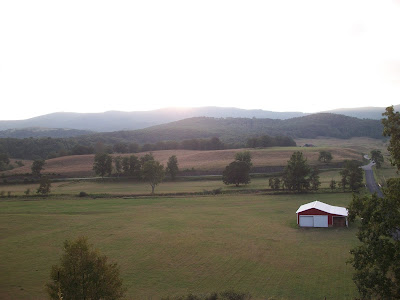 Posted by Ginny Neil, The Singing Farmwife at 9:16 AM No comments:

Turtle in the Hole


I haven’t been swimming in the hole under the bridge since a plate-sized snapping turtle took up residence in the snag. He sits on top of it surveying his kingdom with his beady black eyes. I have enjoyed swimming in the hole with goggles and snorkle, but I believe in giving snapping turtles their space. My grandfather used to make soup from them. He would catch them, I’m not sure how, and then hold them in a barrel feeding them grain until all the fishy taste was cleansed. Then he stewed them with corn and tomatoes and lima beans. I remember liking the soup as a child, even though I had to spit out the occasional clavicle or toe bone.
I will let this turtle continue his reign over the swimming hole. He’s been joined by two golden trout. Perhaps he will scare away the blue herons who might snack on them. If he grabs their toes or beak, I’ve heard it said that he won’t let go until it thunders. As dry as this summer has been that could be a long time. And I will swim instead at the pool. There’s not near as much excitement there, but the water is clear and I can see the bottom. Nothing scary lurks there.

Posted by Ginny Neil, The Singing Farmwife at 3:56 PM No comments: