At 2:30 this morning, I stomped out to the back forty dressed in nothing but my little blue nightgown and Muck boots. The fog was backlit by a full moon and I walked through liquid silver as I crossed the culvert to the dog houses where I stood for a moment and listened to the distant bugling of my beagle, Sandy. I had let her off her chain at sundown so she could get a little exercise while the chickens were cooped up for the night. Sandy is too fond of white meat for me to let her loose when they are free ranging in the field. Gus, who was still tied, had been howling since 12:00 as he listened to her merry chase and I despaired of getting any sleep unless I moved him to the house to spend the night on the mud porch. I hoped that he would be quiet there.
When I hopped out of bed to retrieve my loud hound, I wasn’t too happy about a midnight stroll. But, standing in that magical mist, I was glad I’d been forced out. As I listened to my beagle’s howl floating through the fog I could tell that she was running towards me. Rabbits run in a wide arc and Sandy’s singing got louder as she came full circle.
Closer by, crickets chirped in the grass. My twenty-eighth year of teaching started last week and as always it was heralded by choruses of crickets in the fading meadow and yard. This is a bittersweet time of year. The garden is pumping out produce at a rate faster than I can keep up with and my freezer and cellar are fat with tomatoes, peaches, beans, corn, beets and pickles. But school has started and cold weather is just around the corner. The warm freedom of summer days has come to an end.
Houdini, the snake who escaped from my room last week, was recovered under a trash can across the hall. As soon as I put him back in the terrarium, he shed his skin. Vernon, our school janitor said it was another sign of the approaching fall. He said snakes shed when the dog days have ended. I don’t know if that’s true or not, but because he had been without food for almost two weeks, I brought the snake home and turned him loose where I had found him. In a blink of an eye, he disappeared into his home hole.
This is also the time of year when parents all around the county are prodding their children to finish 4-H projects. While Joe and I miss helping our kids with their animal projects, we don’t miss the tension of pushing them to complete their barn displays before midnight. Still, when a neighbor child calls, looking to borrow a lead rope, or a hog waterer, or a halter, Joe is always happy to help.

So, here we are, empty nesters. Like the singing dog and the shedding snake, we’ve come full circle. I wonder what the next round will bring.
Posted by Ginny Neil, The Singing Farmwife at 7:13 PM 1 comment:

Somewhere in my classroom a snake is learning to read. Two weeks ago, when we were cleaning up the yard, Joe lifted the vinyl grill cover off the ground and discovered a small ring neck snake curled in the dirt below.
Hearing Joe’s exclamation, I hurried over and when I saw the snake, I scooped it up and dropped it into a large plastic jar that I keep for such marvelous surprises. I layered some soil, moss and rocks in the jar and the snake slithered into hiding. I planned to take the snake to school and keep it in my classroom for a couple of weeks. Then after all learning opportunities had been exhausted, I would return the snake to the spot where it first saw the light.
I Googled “Ring Neck Snake” and the information that I found was encouraging. These snakes are shy but they make good pets. They need a place to hide, a shallow dish of water and an occasional snack of small invertebrates. Their favorite meal is salamanders. I strolled around my yard lifting rocks and logs until I uncovered some worms, crickets and a small black and yellow spotted newt. Perfect. I had a snake smorgasbord. The critters were dropped into the jar but the snake didn’t seem interested in the menu.
Five days later, the only thing the snake had eaten was the tip of the salamander’s tail. Worried, I returned to Google and discovered that my snake’s milky eyes meant it was getting ready to shed. Snakes lose their appetites as their skin gets too tight.
On Wednesday, I took the snake to school and it was a big hit that night at the sixth grade orientation. On Thursday, the biology teacher offered me a bigger home for it and I transferred the snake into a ten gallon terrarium. At this point, the Ring Neck’s eyes were almost completely opaque. I anticipated finding a freshly shed skin on Friday morning.
What I didn’t anticipate was finding an empty terrarium. I wiggled my fingers through the rich loam. Perhaps the snake was burrowed deeply in the dirt. I turned over leaves, moss and rocks and uncovered the salamander, crickets and worms. But, there was no sign of the snake. The small opening between the glass sides and glass top of the aquarium must have been large enough for the slithery Houdini to escape. But where did it go? The last thing I needed on the first day of school was gaggles of girls leaping up on their desks when the snake reappeared. I crawled around on my hands and knees and looked everywhere, but the snake was gone.
The students came for the first day of school today. They asked about the snake. I told them that I took it home. Yes, on the first day of school, I told a big, fat lie, but it’s better than the alternative. There are some students who wouldn’t come into my room if they thought a snake might drop out of the ceiling for a visit.

Somewhere in my English class a snake is learning to read. I hope it learns to spell EXIT.

Posted by Ginny Neil, The Singing Farmwife at 7:50 PM 1 comment:

A Peach of A Day 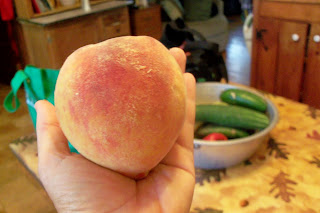 I spent a day last week putting up the bushel of peaches Joe and I picked up on our anniversary trip.  This is just a little pictorial of all the fun.

Posted by Ginny Neil, The Singing Farmwife at 8:03 PM 1 comment:

Those who know the secrets of the dirt are leaving us. The hardworking sweaty browed farmers who could pick up a fistful of soil and tell when it was ready for seed, or point to a furrowed patch and say, “That is the best spot for onions in the garden,” are dying and their children are selling the land because farming is just too hard and doesn’t pay particularly well. The former vegetable gardens and apple orchards and timothy grass pastures are being buried beneath housing developments that have sprouted up on former meadows like mushrooms on cow pies. What’s been built can’t be unbuilt.
Joe and I just returned from a four day anniversary trip through the central and western sections of Virginia. We were appalled by sprawl. We found battlefield land preserved in narrow strips that were bounded on either side by shopping malls, housing developments and storage units. We climbed Lee’s Hill in Fredericksburg and stood with our backsides practically in someone’s storage shed as we gazed out on what used to be pasture but is now a commercial district. We drove scenic routes that showcased run down farms and encroaching malls. And, we were sad. Living in our little forgotten gem of a county, where there is only one blinking stoplight and whether or not to build a Dollar General was a much debated topic, has spoiled us. We gaze daily on cows and sheep and rolling, vibrant pastures so it is understandable that we found most of the scenic routes a bit of a letdown. But we were shocked by how fast it is all disappearing.
We drove on roads that used to be lined with daisies and chickweed and are now lined with malls and we wondered why we need so many of them. What is everyone buying? And the even bigger question is: What will everyone eat when all the farms are gone?
Posted by Ginny Neil, The Singing Farmwife at 4:48 PM 2 comments:

Email ThisBlogThis!Share to TwitterShare to FacebookShare to Pinterest
Labels: where have all the farms gone? sprawl
Newer Posts Older Posts Home
Subscribe to: Posts (Atom)