A Dog, a Calf, Some Hens and a Hawk

After two weeks of being confined in the dark shed, the calf has been granted his first freedom.  It’s a balmy 34 degrees this morning, the first above freezing weather we’ve had in almost two weeks, and the calf is strong now, eating grain along with his bottle of milk, so it is time for him to have a little frolic.  Last week, he was joined in his snug stall by an old ewe, who had gotten weak, and she ventures out with him into the snowy back forty.
Luke, our rabbit beagle, loves the calf and he is excited to finally have a chance to play tag.  They skitter across the frozen ground and the calf ducks his head, spinning wildly.  Luke follows along prancing his joy.  Then, the calf  looks up and sprints.  He is running with his tail high, the way calves do when they’re warming up on a cold morning.  He whirls to face Luke who finds he must now dodge the enraged ewe.  She hasn’t paid much attention to the calf while they were in the stall.  He’s been more of an aggravation to her, butting her out of the way when he wants to steal some grain from her bucket.  But, this morning, her protective instincts take over.  The ewe lowers her head and, bam, she bowls Luke over.  He jumps up and circles to her backside, thinking she wants to play.
She spins, looking for him, but he is already back to the calf.  They are standing nose to nose and she stomps her foot in warning.  Luke knows what this means .  The last ewe who did that to him, got in a good kick with her front foot.  He backs off and runs over to the chicken house to see what the hens are up to.
I opened their door earlier this morning and several have flopped out into the snow.  They are pecking and making the little beeping noises they make when they are happy.  Luke bounds up, scattering them, but before he can engage in a game of “chase the chickens and watch them flap” I call him off.  I can’t decide whether to leave him out or take him back in the house with me.
Yesterday, we found a dead chicken.  She was breast up in the snow surrounded by a neat circle of soft feathers.  Her chest and body cavity had been eaten out and there were no tracks in the snow around her.  I don’t think Luke did it.  I am hoping that he still thinks chickens hurt.( Luke's Lesson ) Hawks and eagles eat chickens that way, pulling out feathers and tossing them all around.  As I am trying to decide whether or not to trust him with the girls, I hear a hawk scream overhead.  It is riding the high winds, hanging motionless a half a mile above.  Another scream to my left signals a second hawk, who is slightly higher and flapping against the wind.  It seems to me that they are watching the brown chickens against the white snow.
That settles it.  Luke will stay out.  Maybe he’ll keep playing with the ewe and calf and the hawks will be frightened by the movement.  The chickens have just resumed laying pretty well, and I don’t want to lose another one.  I leave the door of the coop open so the chickens can duck inside quickly if they need to.  Then I go inside.  I will be haunting the windows today.
Posted by Ginny Neil, The Singing Farmwife at 7:03 AM No comments:

It was 13 degrees this morning when I woke up, and I wanted to stay under the covers, but the calf bawling out in the shed for his breakfast pulled me to my feet.  I'm usually glad to be up once I stir around, but on a cold morning it's sure hard to start the stirring.
I mixed a bottle of milk for the hungry calf, then pulled on three layers, wool socks, a down jacket and my big rubber muck boots before heading out. The sun was just peeking up from behind the hills, backlighting the shed and throwing long shadows. 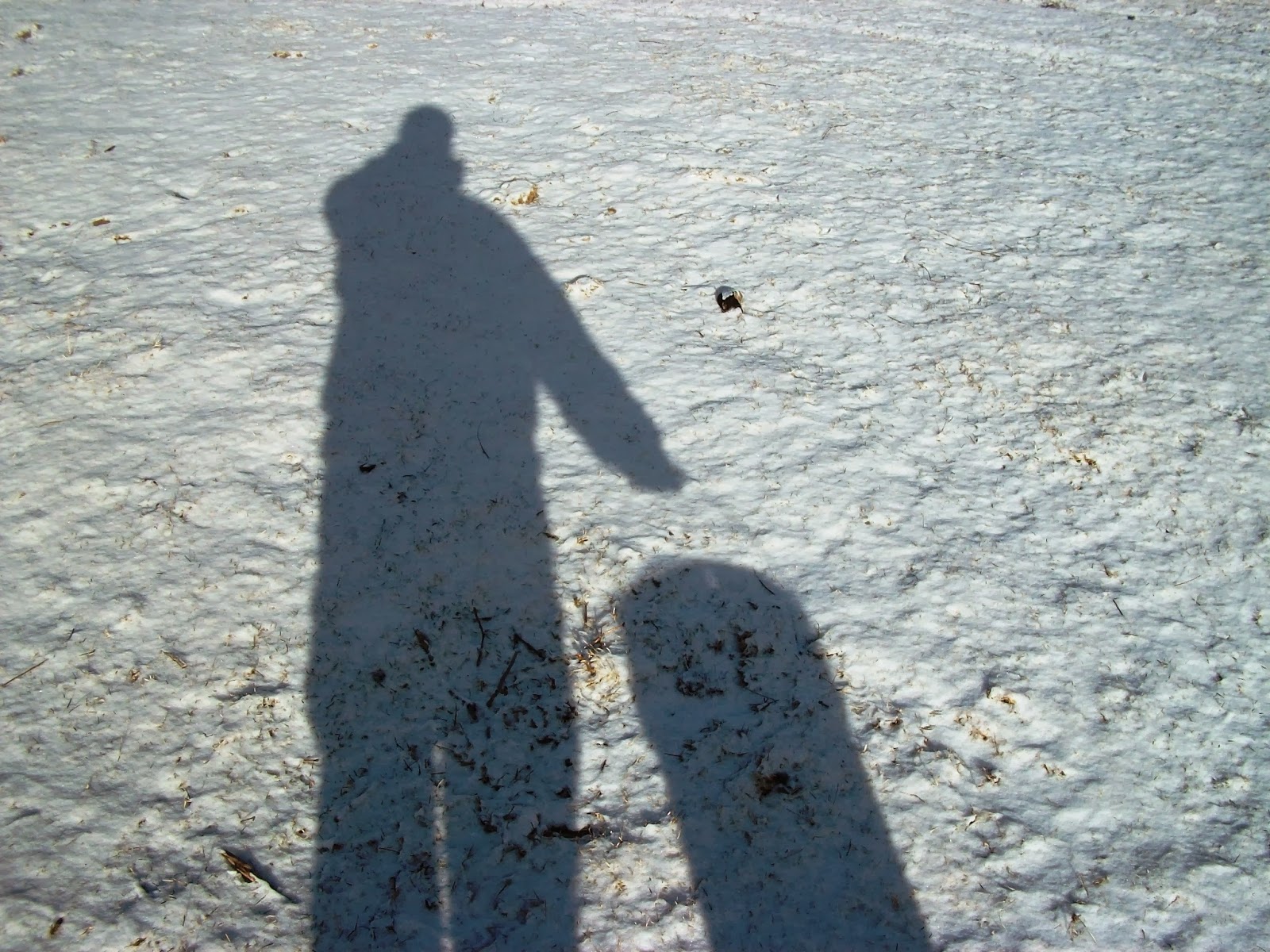 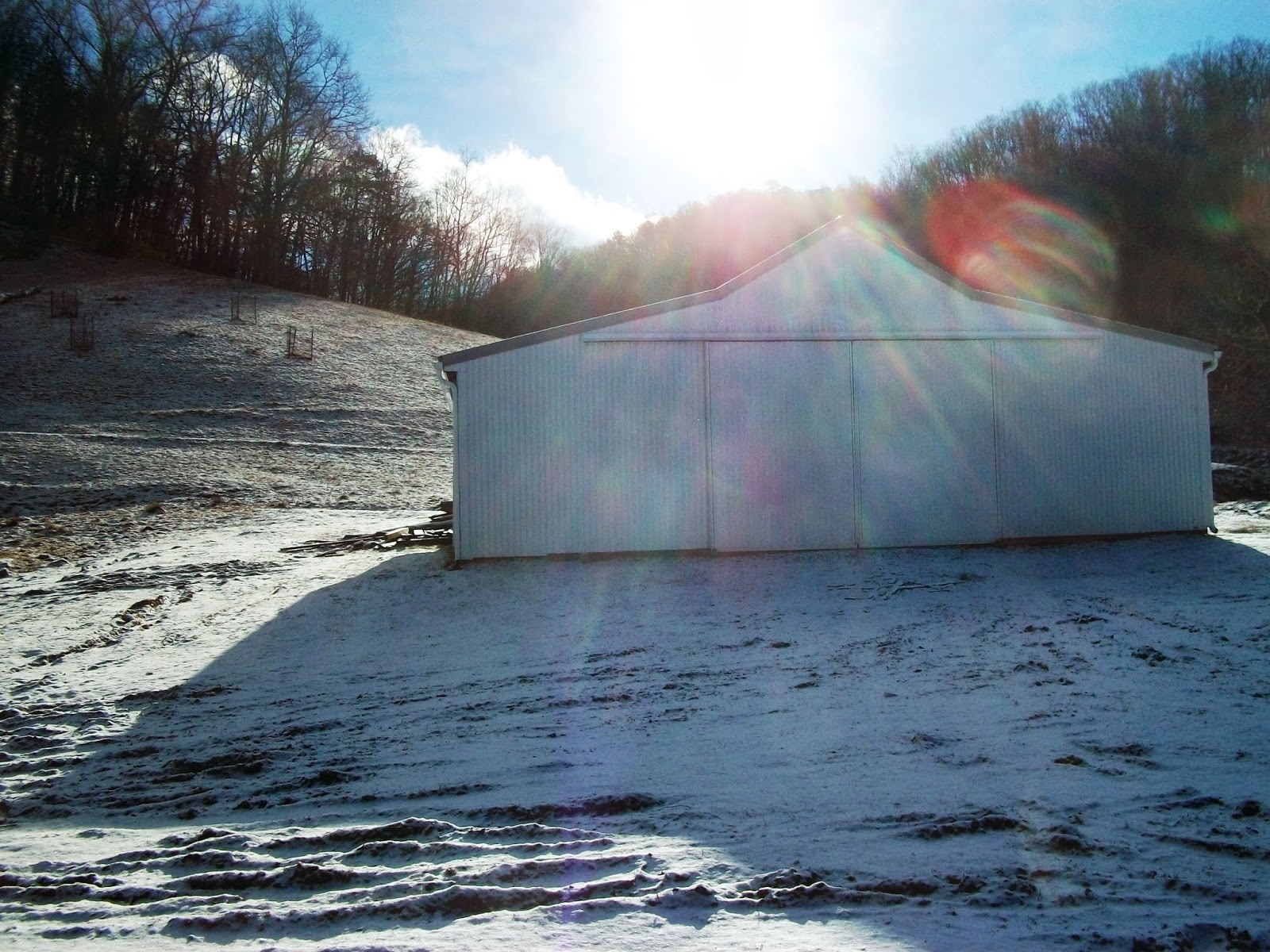 Luke ran ahead of me.  He surprised a vole, catching it with his paws and then tossing it up into the air several times.  Then he skipped over to say good morning to the calf. The calf was happy to see him and they greeted nose to nose in the fashion of animals. 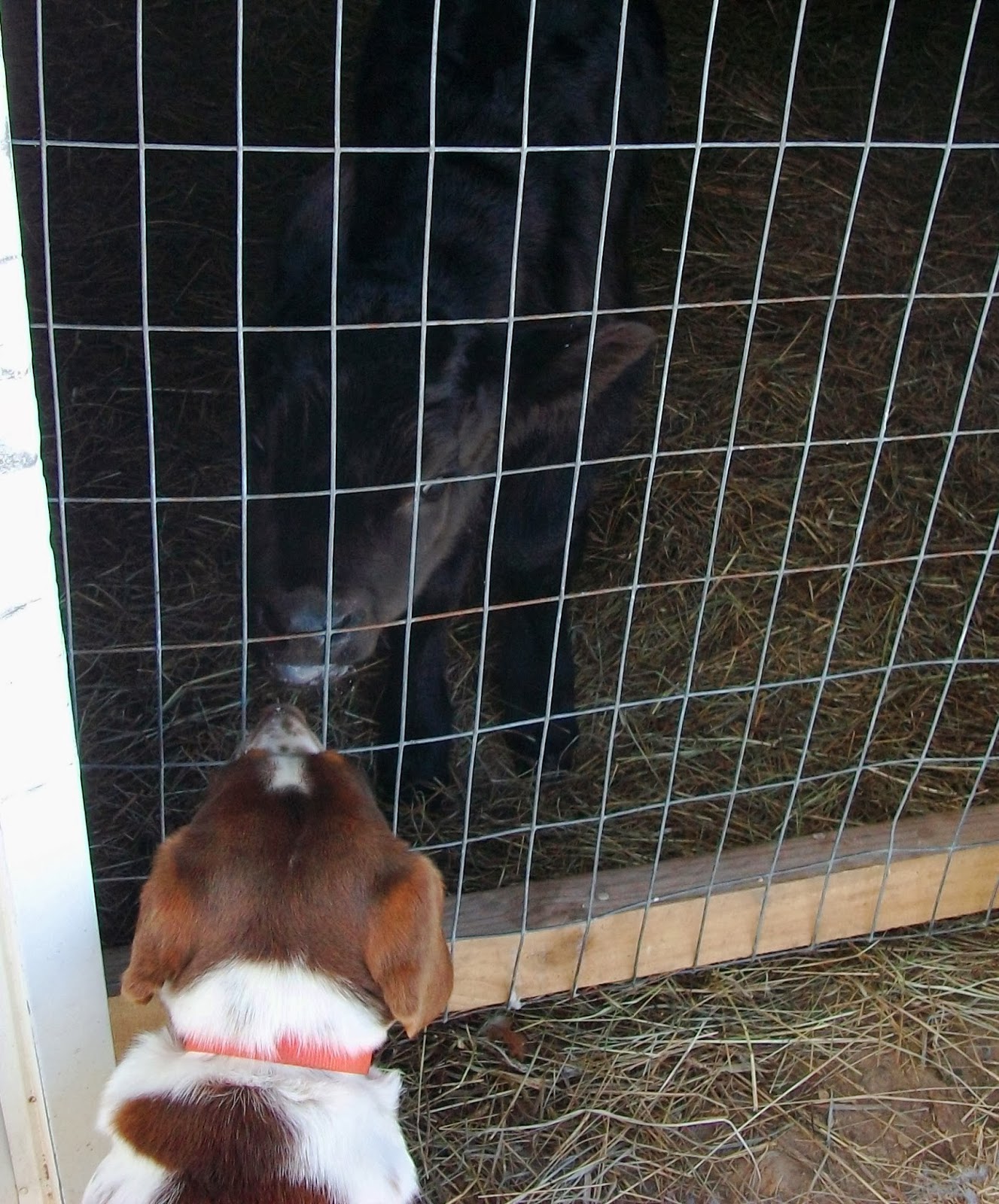 I fed the calf his bottle, but because he drank it so fast, he didn't realize he was full.  He bawled, asking for more so I offered him my finger, which he sucked on eagerly.  A calf's mouth is warm and slick and he can pull a ring right off of your finger if you aren't careful. 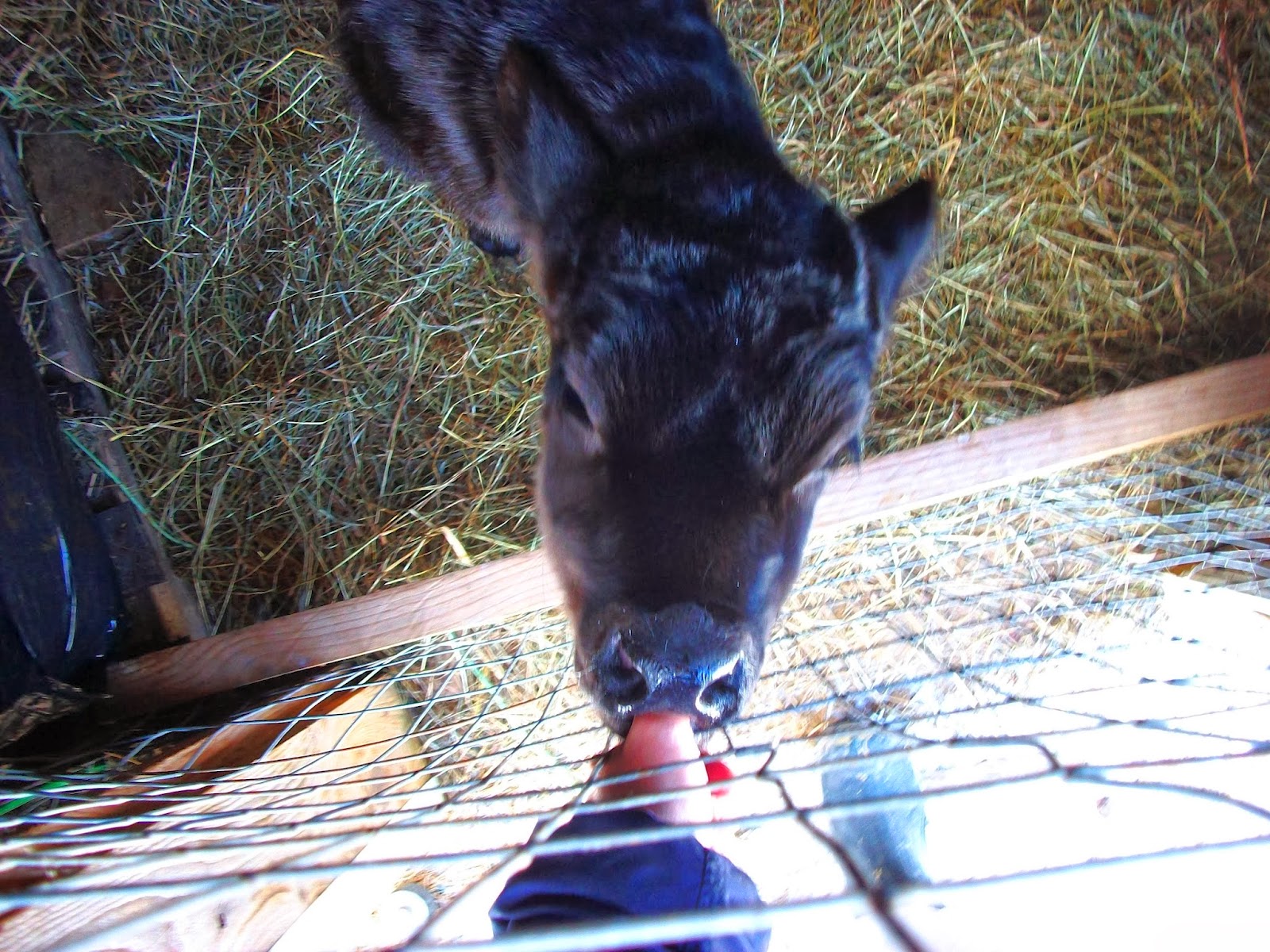 Next, Luke ran over to wake up Rex, who was pretty grumpy about coming out into such a cold morning from his warm, hay-filled house. But, I walked down to the creek, and broke some ice to give him a drink of water, and then carried a bucket full back to the calf, who is just learning to drink it. 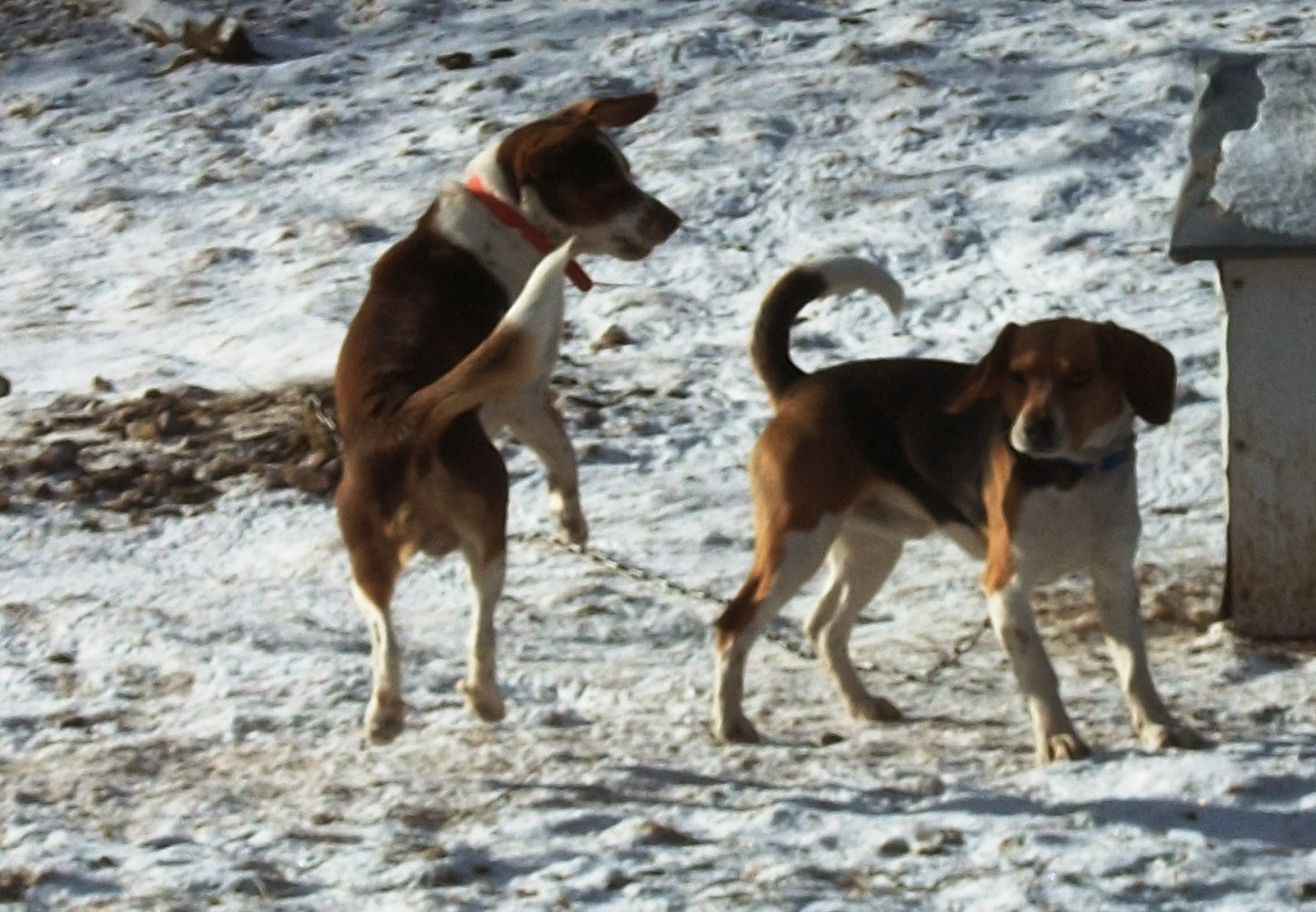 The steers saw all the commotion and came running for their breakfast.  I carried a five gallon bucket of mixed grains out to them and poured it in their trough. 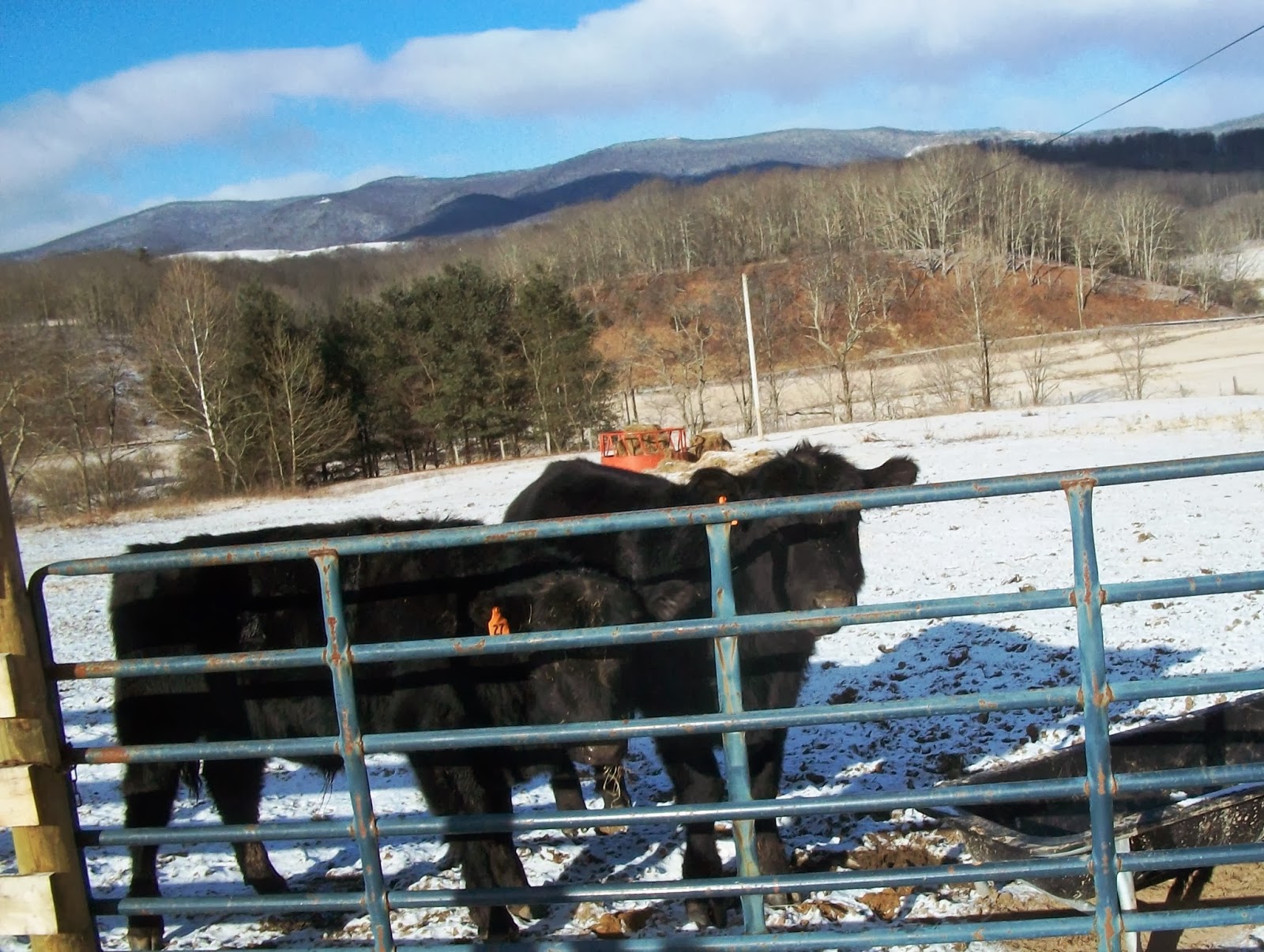 A few of the chickens wandered over to eat what the steers spilled, but most of them were still trying to decide whether or not to step out into the cold morning. 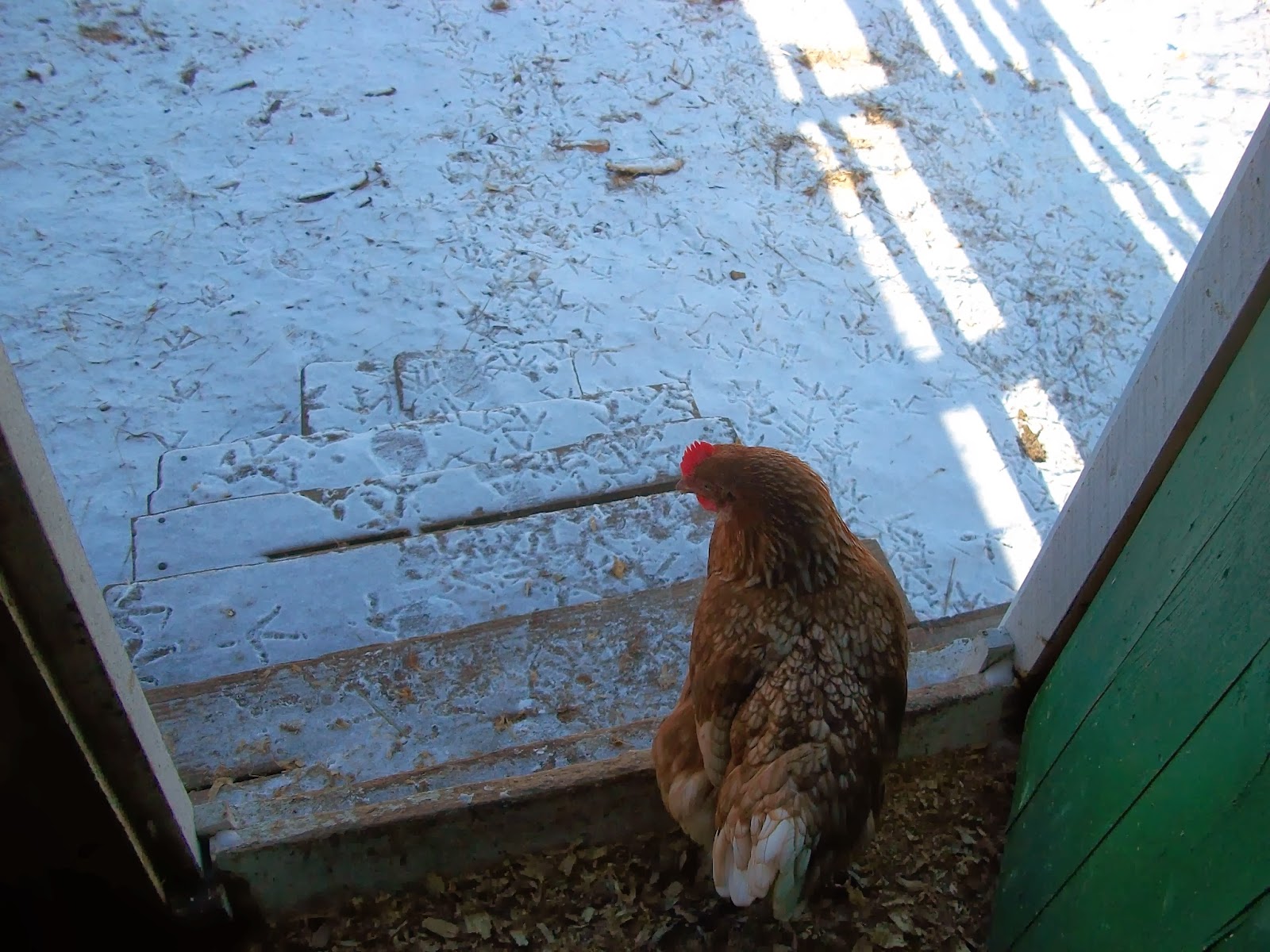 I walked up the hill to the hen house.  Some of the chickens were lined up on the south side, in the sun, but several were still huddled on the roost.  I checked the nest boxes for eggs and found fourteen.  I gathered them so they wouldn't freeze. 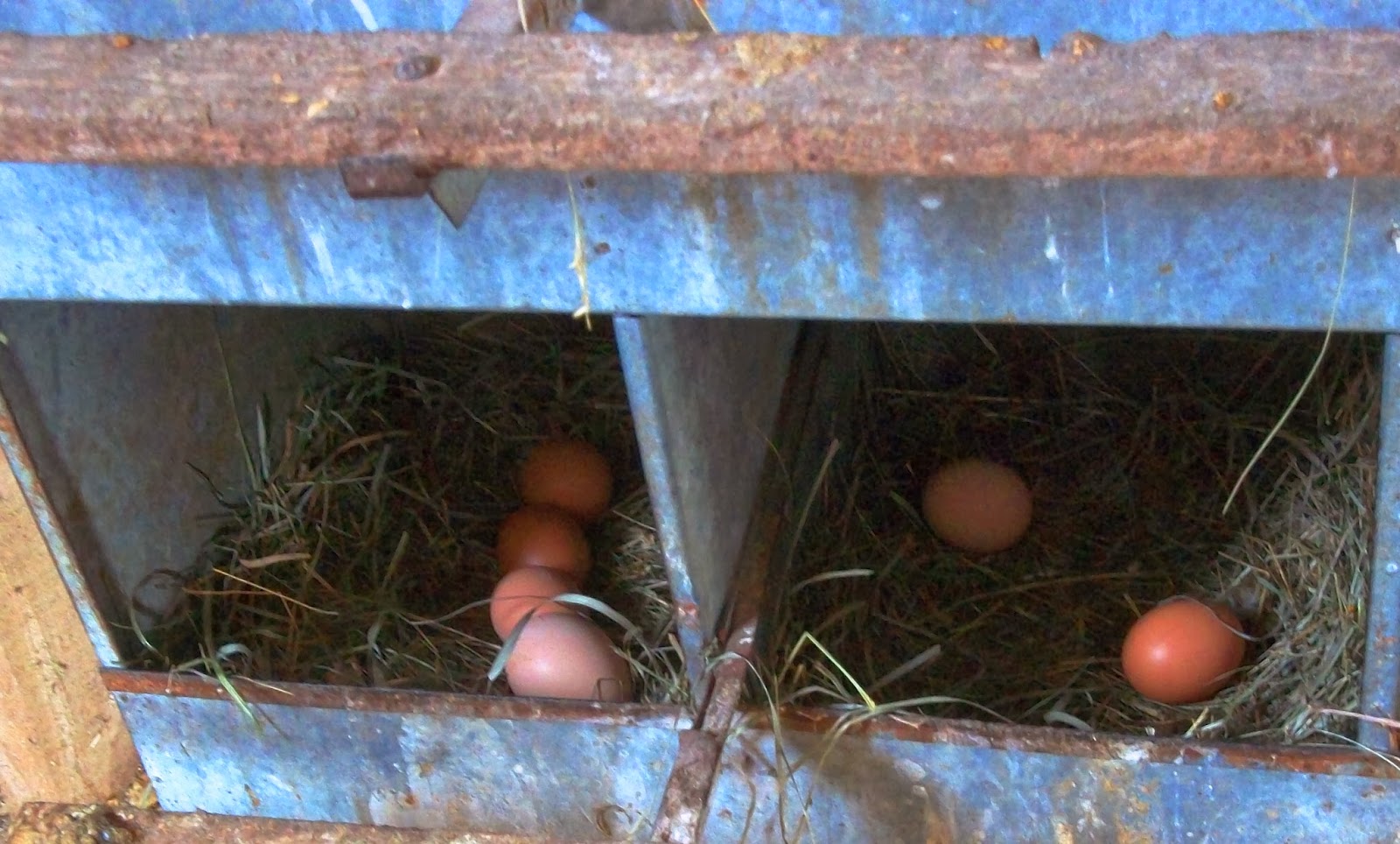 Then, back down to the creek with two buckets to fill.  That water was poured into the chicken waterer which is set on a heated ring so the water won't freeze.  The chickens were glad to see it and hopped up for their morning sip. 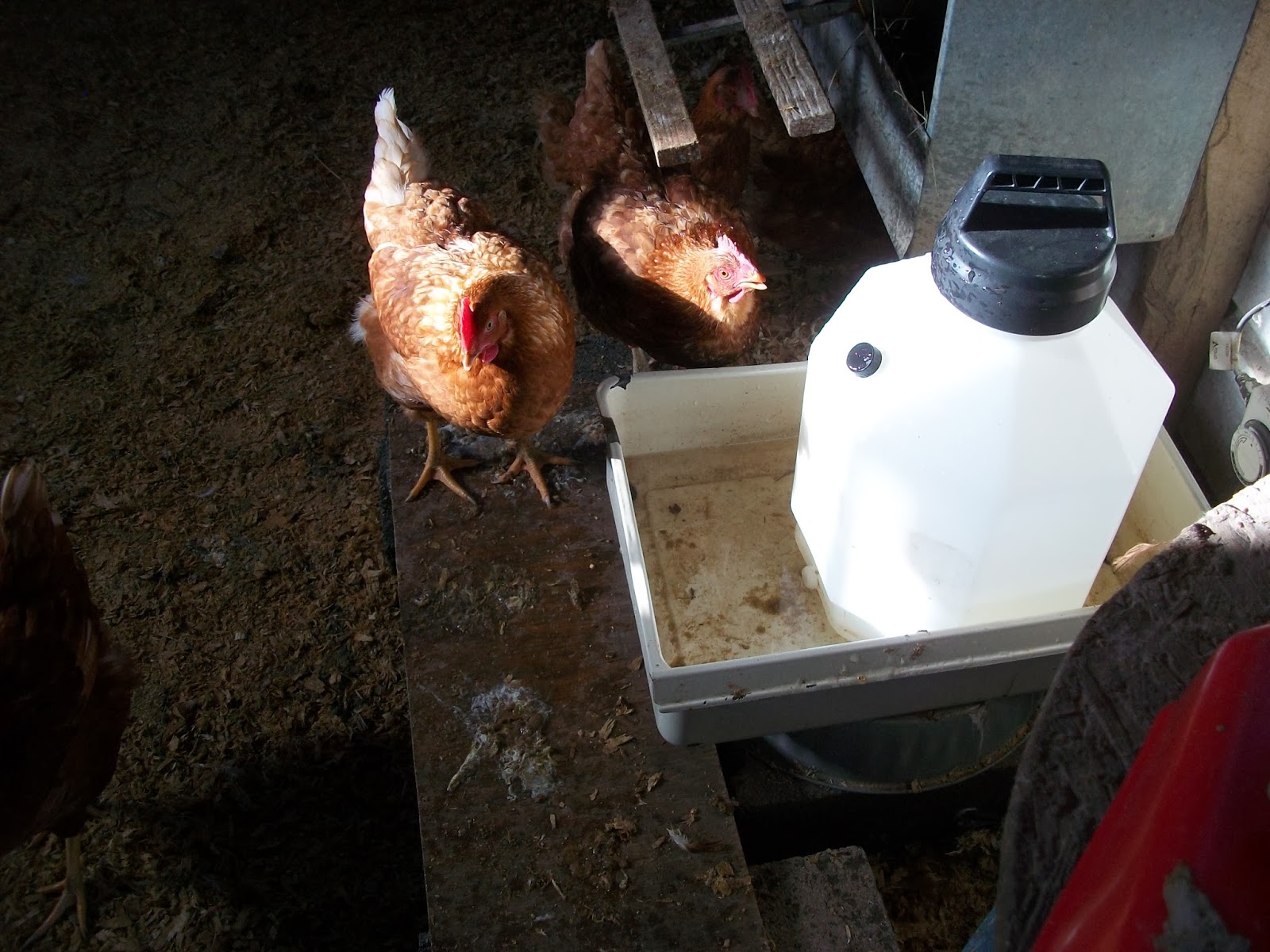 That took care of all the morning chores.  I stood in the hen house listening to the hens chuckle and purr.  They make such lovely morning sounds.  Then the two roosters decided it was time for a crowing contest.  The oldest one crows tenor, while the youngest crows bass. 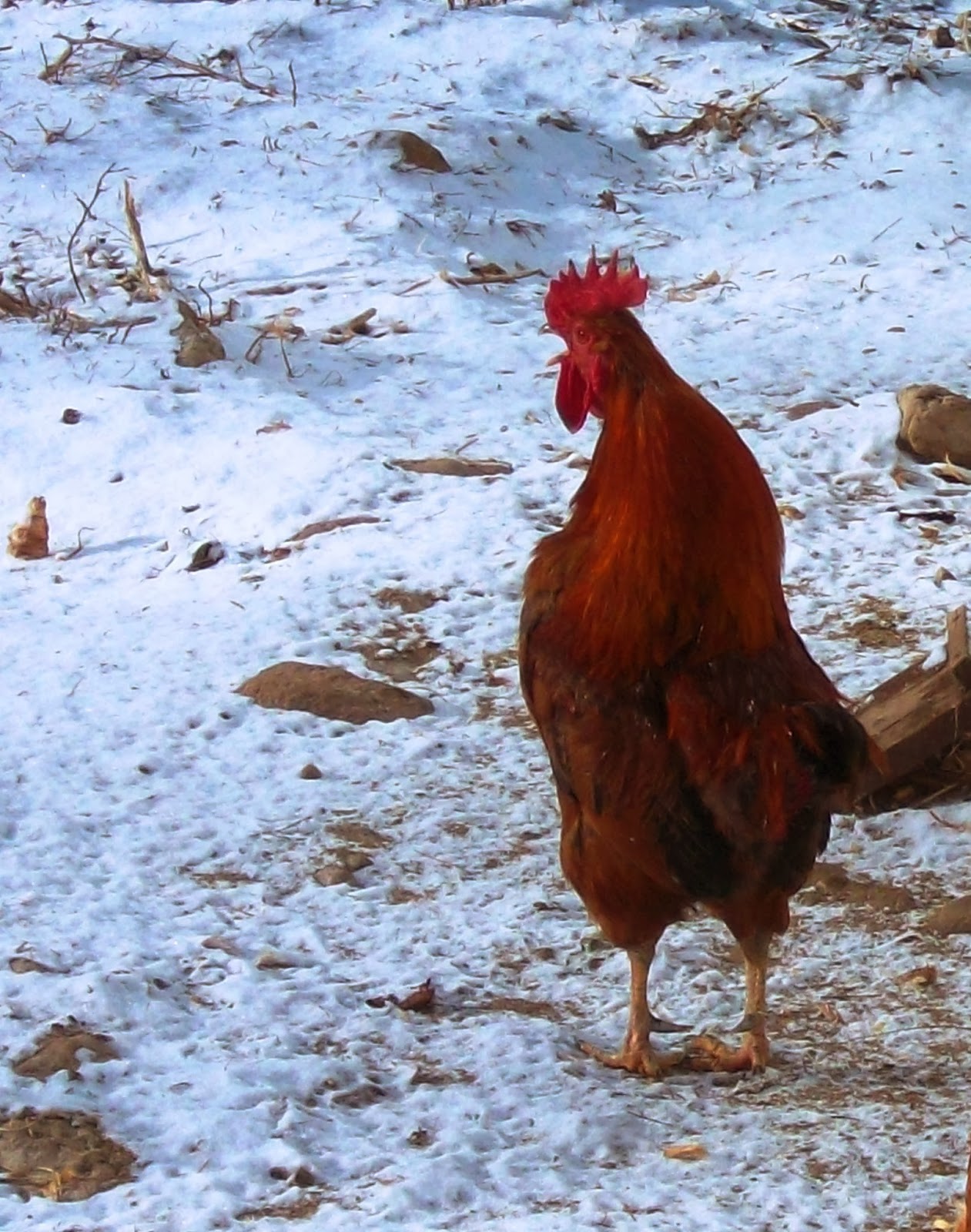 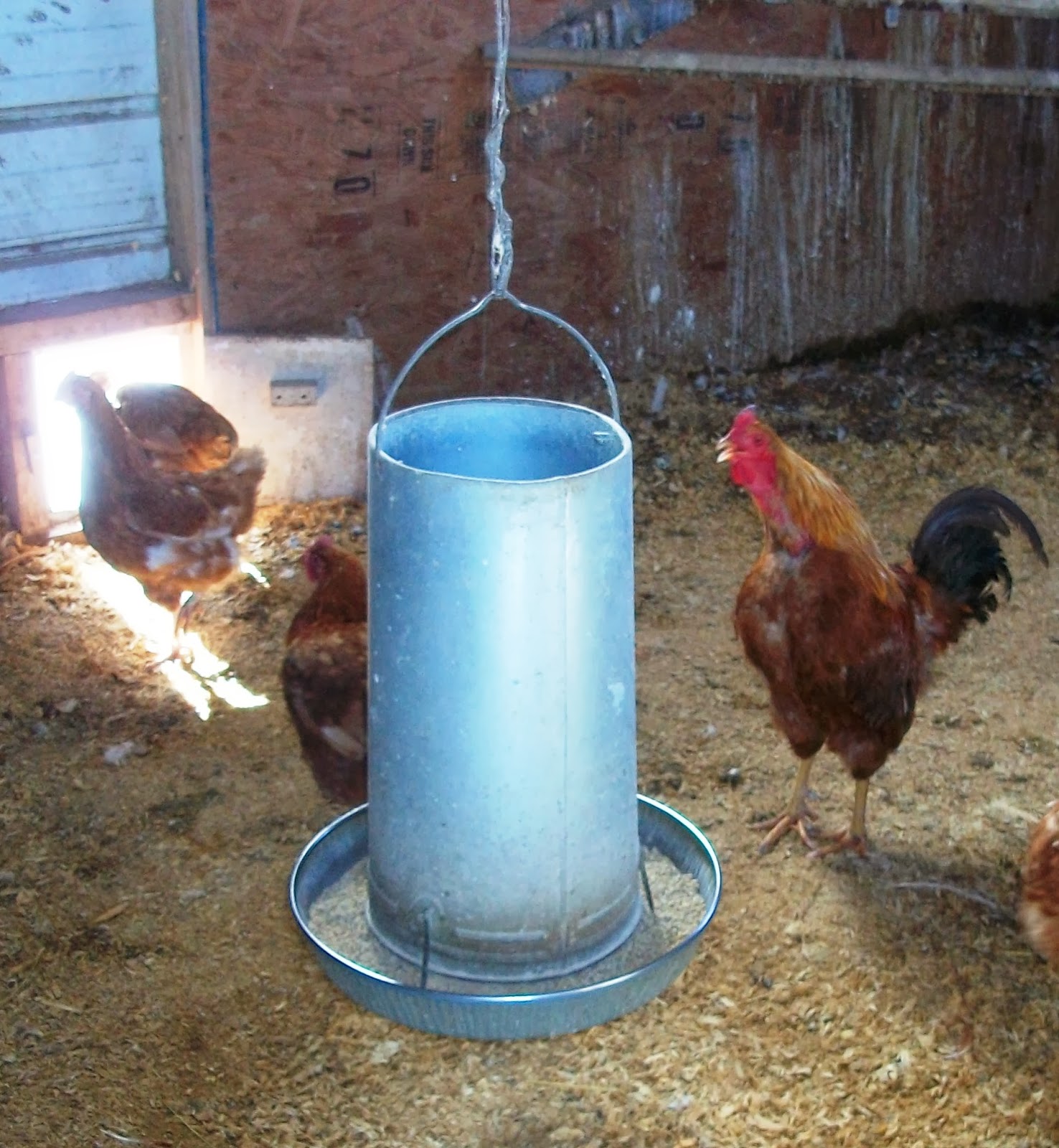 I opened a window in the henhouse, so the sun could shine through and then headed back to my own house.  The sun had risen above the gap and the house glowed in the brightening day. 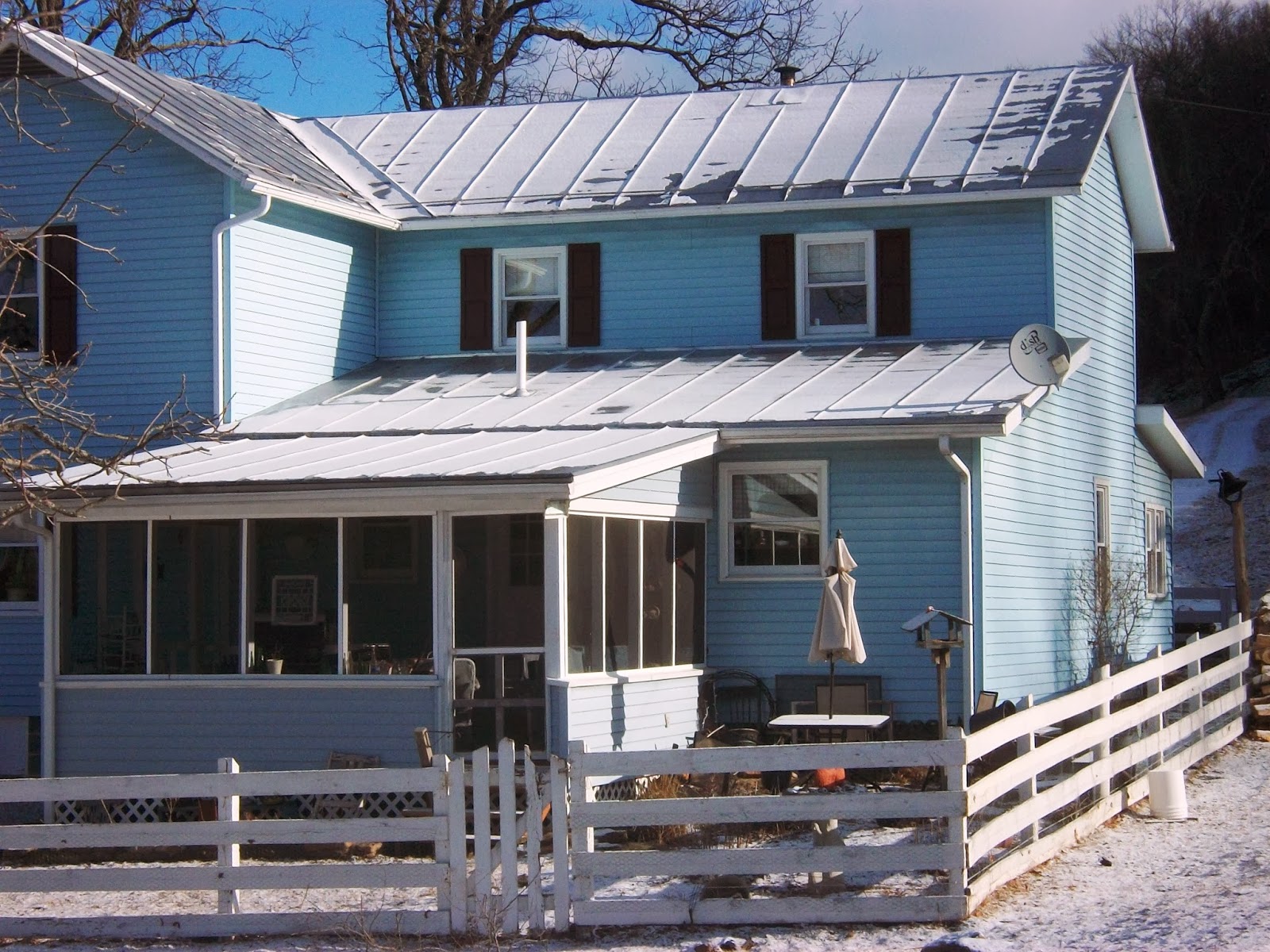 When I got back inside, I backed up to the woodstove until I had thawed completely.  The cat watched for a while and then curled back up for a nap.  I think it's time for me to do the same. 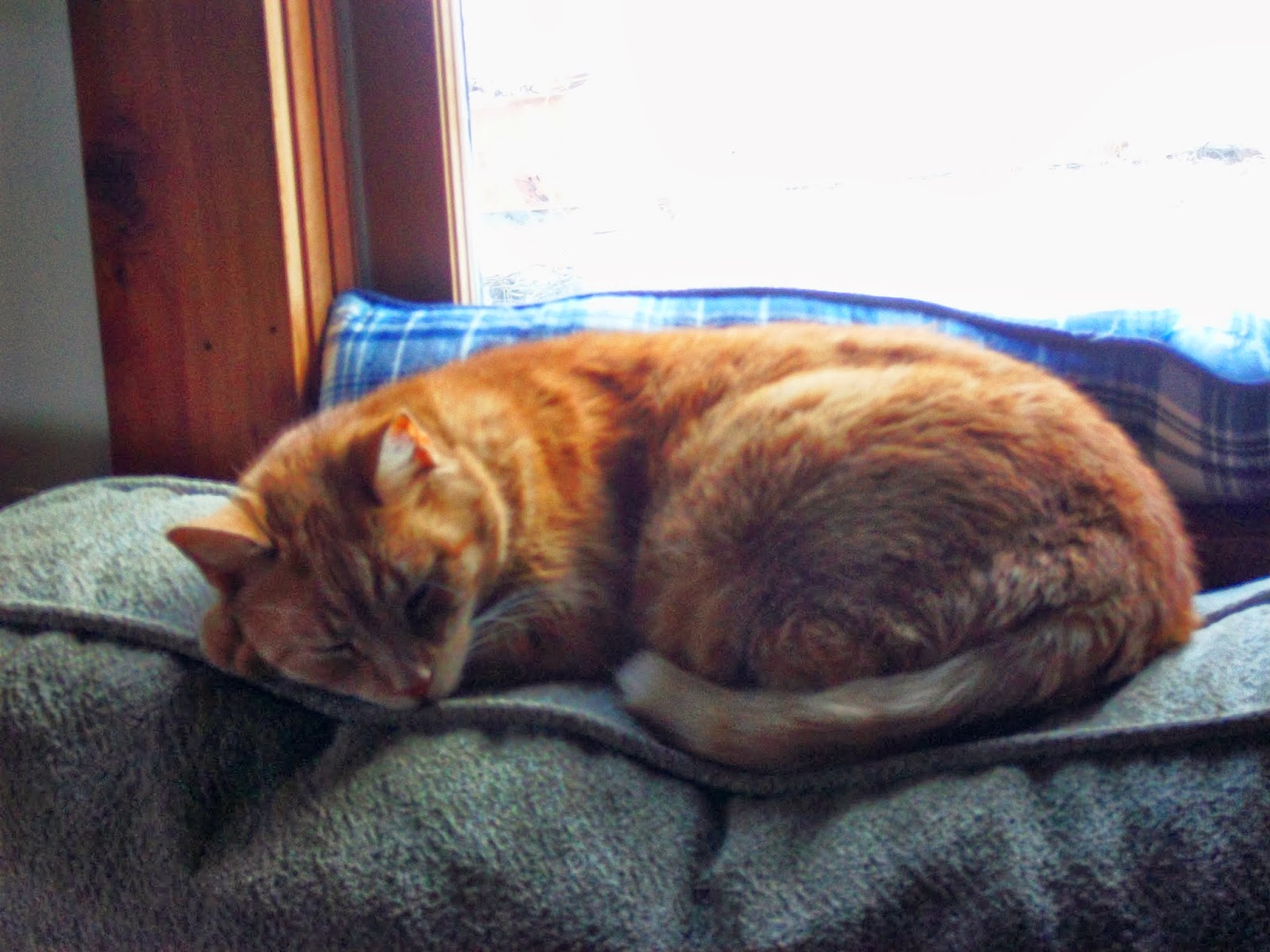 This afternoon, I'll do it all again.
Posted by Ginny Neil, The Singing Farmwife at 8:37 AM No comments:

In my last post, I wrote about how death reminds us of how precious life is. Just so you know, life wins an awful lot. Here are some photos to prove it.
Posted by Ginny Neil, The Singing Farmwife at 9:00 AM 2 comments:

Chickens have brains the size of a pea, so I shouldn't have been surprised when one of my hens went to visit my dog.  He found her delicious.  I found her back leg and some feathers.
You cannot ignore death if you live on a farm.  It surprises you at lambing time, when you reach inside a straining ewe to help bring a lamb into the world and bring instead a leg; the rest of the lamb still curled in utero having died yesterday. It breathes over your shoulder as you hold the halter so the vet can administer a lethal dose to a dying horse. It greets you with the news that your dog played too hard with the kitten and watches you nurse orphaned calves who die of pneumonia in spite of your tender care.
I have looked cattle in the face knowing that they would be a meal one day and worked up a deer who played in my meadow yesterday.  Death feeds my family.
There’s a graveyard out in the pasture in front of my house.  One stone is inscribed to Lillie E., a beloved daughter who died in 1884 of diphtheria.  Gravestones all over the county tell the story of pioneer children who died young, sometimes whole families of them.  Of pioneers who faced more than the death of livestock or the uncomfortable knowledge that the chicken in the pot recently crowed up the sun.
I grew up in the city where death was an abstract concept.  It visited rarely, in tragedies like the heroic death of a teenage friend as he tried to save his brother from a fire, or in hospitals where grandparents walked in and were carried out.   I did not know that death was just as much a part of life as joy and dancing and laughter.  Here on the family farm, I have learned what the pioneers knew.  We are here for a short time, and the living is sweeter because of the dying.
Posted by Ginny Neil, The Singing Farmwife at 6:40 PM 4 comments: