The quirky weather had me despairing that I would ever see a ripe tomato in my garden.  Oh what little faith I had.  My tomatoes have produced in abundance.  I have spent the last 4 weeks canning pizza sauce, spaghetti sauce, salsa, whole tomatoes, pickled hot peppers and green tomatoes, vegetable soup and tomato soup.  We have also eaten our green tomatoes fried and our big yellow slicers on home-made bread.  The definition of tomato heaven is in my garden.
What are pickled hot peppers and green tomatoes you ask?  Check out Singing in the Kitchen for a recipe that's sure to please anyone who likes a little jarred heat in the winter.

Posted by Ginny Neil, The Singing Farmwife at 8:42 AM 1 comment:

When I was in elementary school, I spent a few weeks each summer on my grandparents' farm.   My grandfather was a peanut farmer, but he also grew butter beans, cucumbers,strawberries, asparagus, squash and tomatoes. Early each morning, we took our baskets to the garden and picked things.  Then we would move to the shade behind the farmhouse and, while the cicadas sang  in the trees, shell or slice or peel what would soon be lunch. Ten minutes before it was time to eat,  Papa would tell my Nana to get the pot ready, and then we’d head into the garden again and pull just enough corn for one meal.  We would shuck as we picked and then tote it to the house to drop in boiling water for exactly seven minutes.  I loved sopping up the pot likker from the ham and butter beans with Nana's cloverleaf rolls, but I always made sure to leave room for two ears of corn.  Slathered in butter and sprinkled with salt, it was better than dessert.
That is why I am such a corn snob now.  Corn is best eaten within an hour of picking.  Every year, Joe and I  plant at least three rows in our garden.  We usually choose our varieties based on their days to maturity so we can eat corn all summer long.  The types that take only sixty-three days from seed to table don’t grow very tall, and last summer we noticed these shorter stalks were being pulled down and the ears opened and stripped just as they ripened.  I chalked our corn losses up to groundhogs or raccoons. In previous years our dogs had patrolled the pastures, but our new puppy, Luke, wasn't old enough to chase critters out of the garden.
This summer, it happened again.  Just as we were ready to pull the ears, our short corn began disappearing, so Joe set a live trap. Apparently our corn thief was slipping under Luke's nose.  For a week, the trap was empty and the stalks continued to topple.  Then one day, I rounded the corner and caught the corn thief in the act.  It was Luke.
He’s a beagle, which makes him just tall enough to grab the ears from the short stalks and pull them off, toppling the stalk in the process.  Then he places the corn between his paws and rip, rip, zip… shucks it with his mouth.  When I caught him, he grinned at me and wagged his tail.  He had corn between his teeth and a cob between his paws.  He doesn’t bother the tall corn.  I’m not sure he even realizes it has ears.  And he does a great job of keeping all other varmints besides himself out of the garden.  I often hear him at night barking to warn the deer and coons away. I figure he's so good at guarding because he wants all that corn for himself.   So, next year I think I will plant a row of short corn just for Luke as payment for a job well done. Maybe I’ll even treat him to some melted butter and salt. 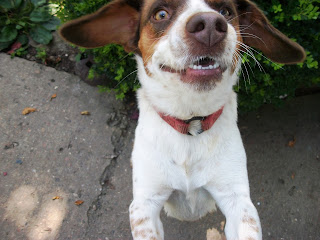 Posted by Ginny Neil, The Singing Farmwife at 8:18 AM No comments: