In a world where so many jobs get easier and less physically demanding, it is awe inspiring to see a farm family take on a new, labor-intensive enterprise.  Kari and Michael, a young married couple who have spent all of their unmarried lives raising and dealing with livestock and poultry, decided two years ago, shortly after their marriage, to try something new.  They took out a long term rental on seven acres near their house and began planning for a truck garden.  We neighbors listened as they described attending classes to learn about raising bees (to pollinate), raising a green house (to start seedlings) raising rows of dirt into straight beds (to plant) and raising vegetables and fruit to sell.  I admit some of us shook our heads and said, “There’s no way they can do it.  They both already work full time jobs.  Where will they find the time?”  But find the time they did.  Kari stayed up late nights cutting up what must have been two tons of seed potatoes until her fingernails were stained black.  Michael plowed and laid irrigation lines by tractor light.  Both could be found early mornings and late, late evenings tending to tender young plants.
They spent every extra hour at the vegetable patch.  And, their hard work is bearing fruit (pun definitely intended).  The strawberries are in and they are abundant, juicy and sweet. 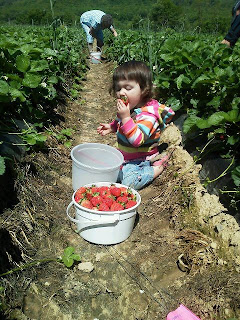 I feel so lucky to have a commercial berry patch just a half a mile down the road.  I have stopped almost every evening on my way home to pick.  We’ve had strawberry jam, strawberry shortcake, strawberry pie, chocolate dipped strawberries, strawberry fruit salad and handfuls of strawberries to eat fresh.  All because these two newlyweds are willing to work hard for a dream.
Soon there will be fresh lettuce and new peas followed by tender cukes, crisp beans, and yellow corn.  So here’s to the energy of a young couple determined to deliver fresh fruits and vegetables.  All across the country crop farmers are working just as hard to put food on our tables.  It’s been quite an education to see the extensive, exhausting work close at hand.
If you come to the mountains of Virginia, stop by and pick up dinner.  It's worth the drive.
For more information or to see the progress of the plants follow this link:
Churchill Produce
Posted by Ginny Neil, The Singing Farmwife at 7:21 PM 1 comment: Links to this post

It's a Dirty Job

Women rearrange their houses, shifting furniture from one room to another in search of the perfect placement.  Farmers rearrange their livestock, shifting sheep and cows from one pasture to another in search of perfect forage.  So, on Saturday, I wasn't surprised when Joe asked me to help him move some sheep. I was particularly glad to move them off of this pasture because it's where my secret asparagus patch is. The sheep keep it gnawed into the dirt until we move them.  But, Joe wasn't interested in growing asparagus, he was interested in growing hay.
I dressed in my oldest pants and my farm boots and we headed out to the meadow, where the grass was almost knee high.  Joe filled a bucket with grain and commenced to hollering for the sheep. 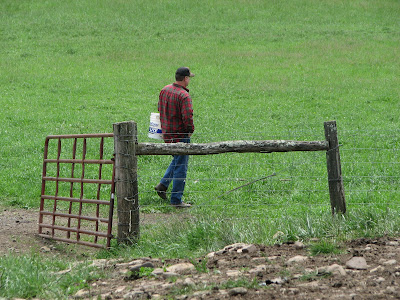 But, the sheep found the grass on their side of the fence pretty green, and ignored his calls. 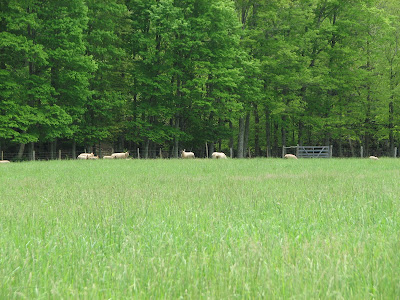 So, Joe and I walked out to them.  He took the low side of the pasture, shaking the bucket and yodeling  "Shi-i-i-i-i-i-rpy," while I walked the upper side, ready to force the sheep to turn and follow him if necessary.  But, as soon as she heard Joe, this ewe ran to the bucket.  The other sheep followed behind and before long we had all of them around the barn. 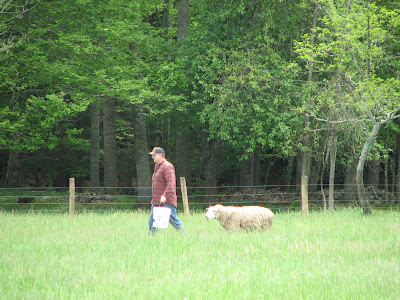 The next job was to pen the sheep so we could move them onto the trailer.  The plan was to put half of the flock on the trailer, dope them (which means to give them worm medicine) and then transport them to the new pasture.  Then return and repeat.  The first group loaded well. 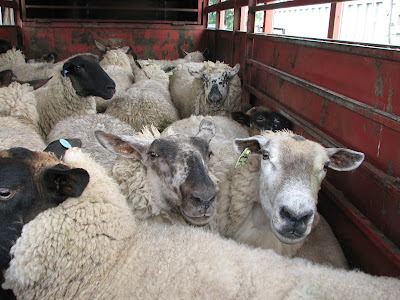 Joe moved among them administering 12 cc of wormer while I followed along behind, marking the sheep with a blue marker.  This helps us keep track of who has been wormed.  The sheep were shitty (sorry there's no pretty word for the condition of their rear ends after a month of green grass) and my other job was to plant my knee in between their back legs to hold them.  Joe slipped the tip of the automatic syringe into the side of their mouths and then squirted the medicine in.  It must taste awful, because the sheep backed away from him every time,grinding their gooey green rears into my bracing thigh.  When we finished the trailer load, all the ewes had blue stripes decorating their wooly backs and I had a deep chocolate brown line decorating my pants. 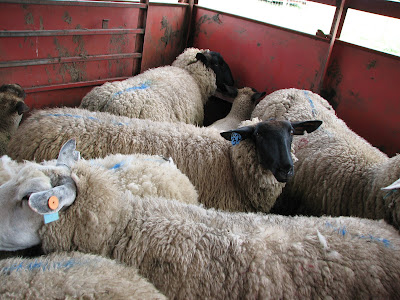 Then we stepped out of the trailer and hopped in the truck.  Six miles down the road, there's a pasture just waiting for sheep.  There are cows already grazing there, but sheep and cows are great companion grazers.  What the cows won't eat, the sheep will, giving the pasture a tidy trim in the process.
Joe counted the sheep as they jumped out.  I tried to help, but I have a terrible time keeping numbers in my head.  Nevertheless, he counted lambs and I counted ewes and then he counted ewes to check my count. 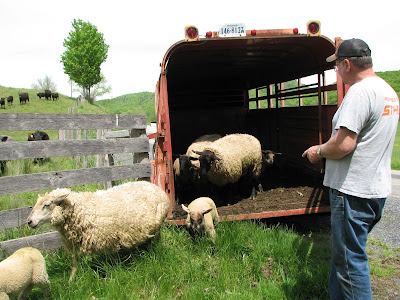 The sheep were a little reluctant to enter the new pasture so Joe shooed them along. 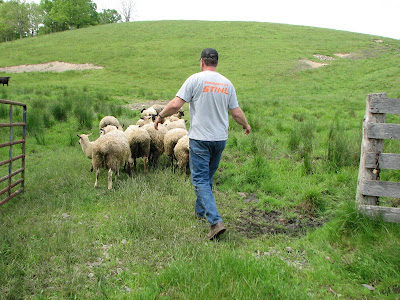 Then we headed back down the road for our second group.  These sheep didn't load as smoothly.  One lamb slipped between the trailer and the edge of the fence, so we chased it around the barn for about fifteen minutes before Joe snatched it mid-jump and hauled it back to the trailer.  The little white-faced lamb in the back was exhausted from that panicky search for his mama. 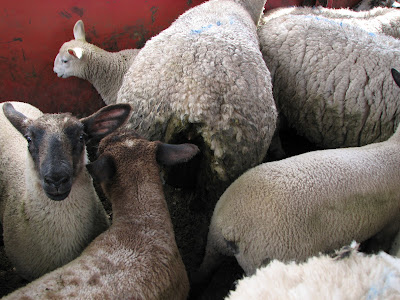 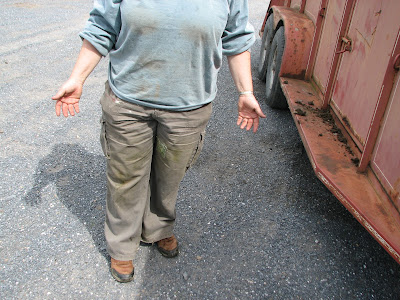 It doesn't show up so well here, but trust me, those brown stains were pungent.  Still, helping on the farm is one of my favorite ways to spend time with my hubby. It's a dirty job, but somebody has to do it.  I'm glad it's me.
Posted by Ginny Neil, The Singing Farmwife at 7:43 PM 1 comment: Links to this post