Reflections From a Tiny Snowman 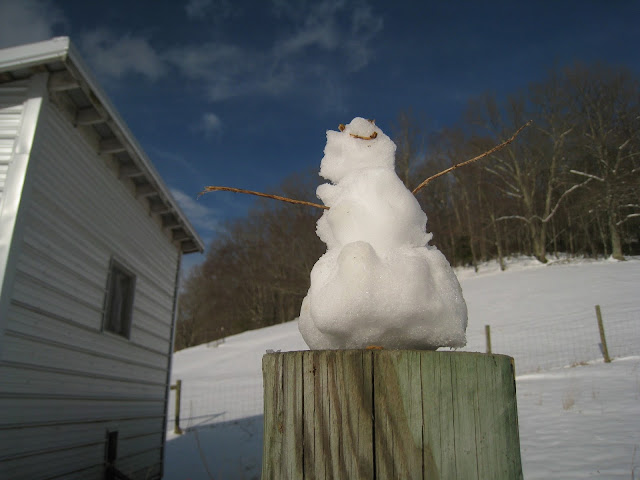 What a beautiful day!  Don't you just love a good snow?  I know I do! It invigorates me, makes me feel refreshed.  Of course if you are a snowman, a good snow adds so much to your life.

I live on a farm.  These are my chickens. 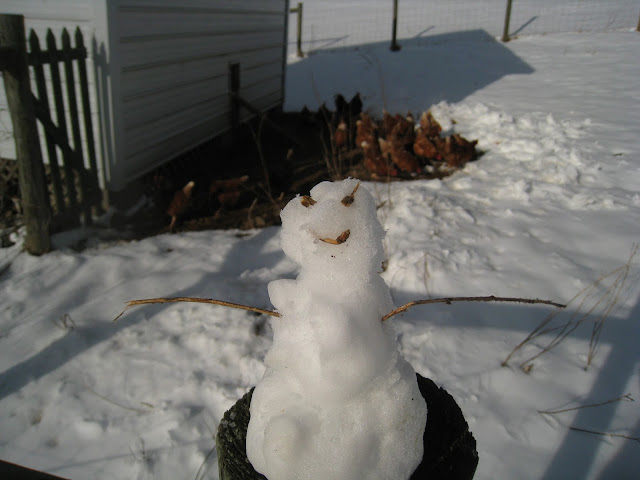 They don't like the snow nearly as much as I do.  Ginny had to dig that bare spot out for them so they would come outside.  When they are cooped up inside, their eggs get dirtier because they spend more time sitting on their nests.

Ginny likes their eggs cleaner so she doesn't have to spend so much time cleaning them herself. Aren't these beautiful? 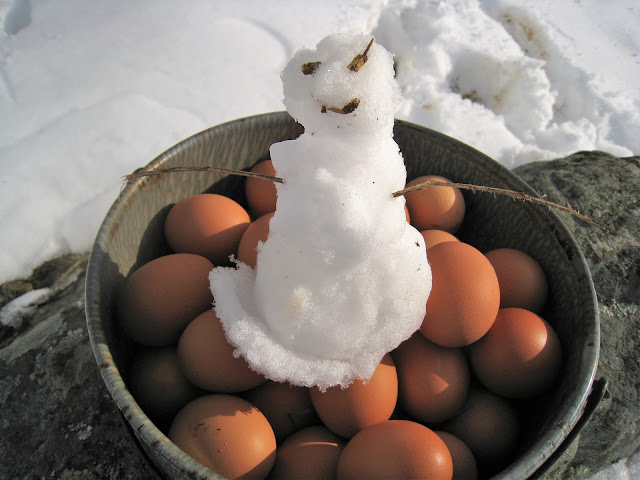 This bucket is the same one that Ginny's mother-in-law used to gather eggs.  It's been in the family for at least 15 years. 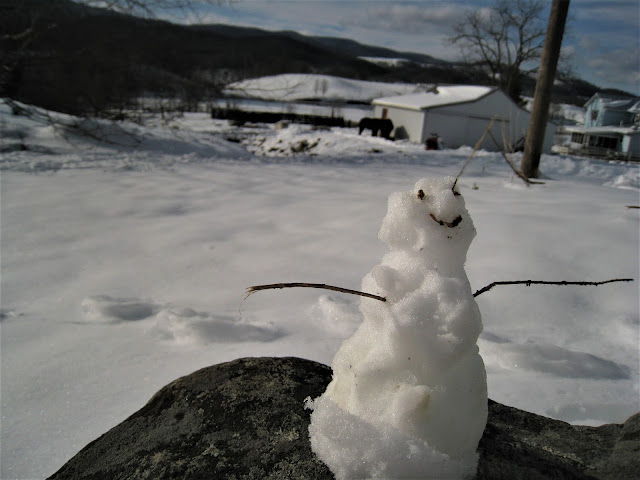 Behind me you can see Ginny's house and her barn and her horses.  The horses are eating some corn that Ginny put out for them to supplement their hay.  They like to stand on that side of the building because it's the warmest in the winter.  See how the sun shines on it?  I stay away from places like that.  Warmth is not my friend. 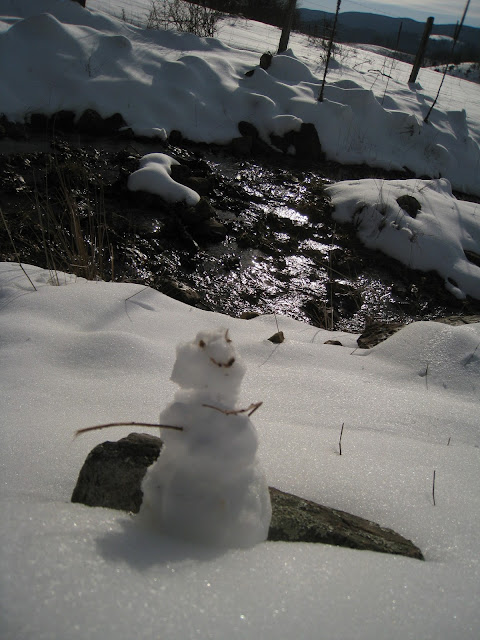 I'm a little worried that I won't be around for very long.  See how the creek behind me has melted?
That's not a good sign.  Still, I'm happy to be alive. A spring snow this deep is pretty unusual. And, this snow is melting from underneath since the ground is so warm. That helps the groundwater re-charge. 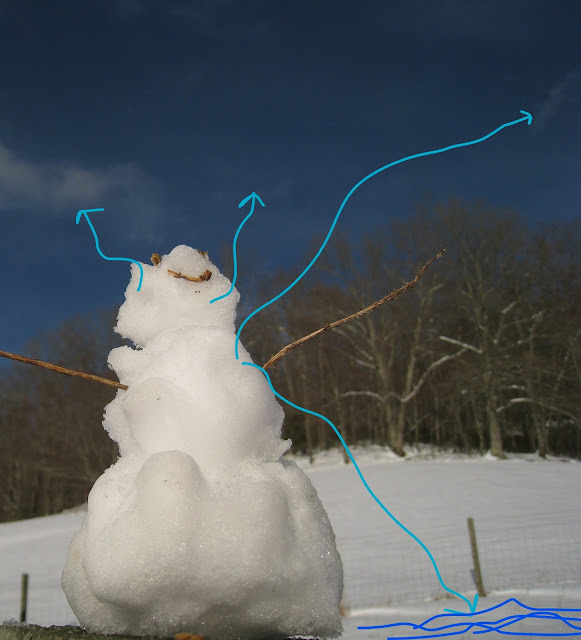 I will help the ground water re-charge, too.  You might think I wouldn't like melting, but even though I don't want to melt right this minute, melting is the way that I travel the world.  After I melt, I might evaporate into the sky to be a cloud, or I might run down to that creek and travel to the ocean. 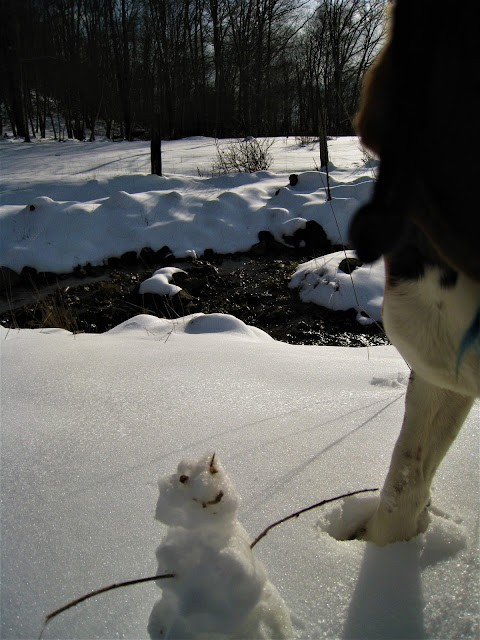 Look, here's one of the family dogs.  His name is Rex and he's a rabbit beagle.  I think he wants to play. 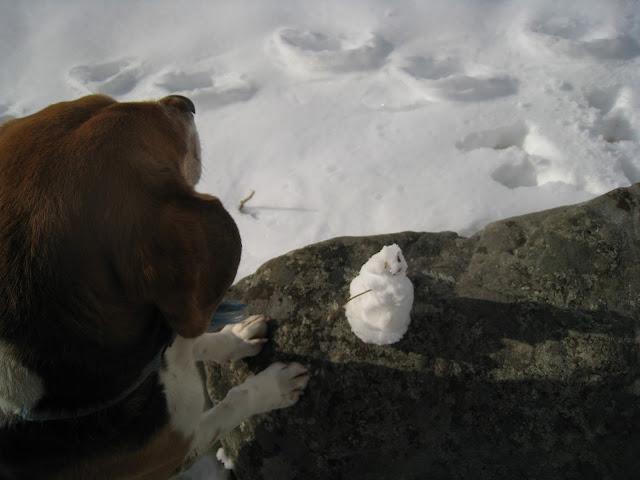 Hey! Watch out! You're getting just a little too close. Back off Buster! I guess I'll be starting my travels sooner than I thought.

I hope when we meet again, I'll be tall enough to look you in the eye.  Some facial hair would be nice, too. 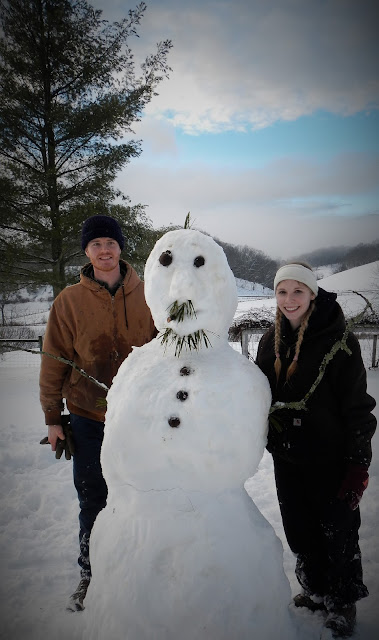 Until then, look for me in the rain, in the rivers and in your tears.  I could show up just about anywhere that water runs.