Battening Down the Hatches

A snowstorm is on its way, although by the looks of the beautiful weather today, you'd never know it.  Nevertheless, a few minutes on Facebook is all it takes to see that weather indeed must be coming.  All of my city friends are posting pictures of empty shelves in grocery stores as folks rush around trying to ensure their safety and well-being before the storm.
The rushing around looks different up here in the mountains.  Folks are rushing around, but the tasks are vastly different.  Many of us have cellars and freezers full of food, so that isn't such a concern. Our concern is for the livestock.  Deep snow means difficulty getting feed to animals, so we are taking some steps to make things easier.
Justin spent the day putting a snow-blade on his skid loader.  If we get the predicted two feet of snow, not only will he need to open paths to the barns to help us get in to the hay, he will also need to open pathways for the sheep and cattle so they can reach food and water.  They will also need places to lie down.
After that, Scott and Justin worked on replacing a fence that had been removed for some construction around a barn.  When the fence was back in place, they moved a flock of pregnant sheep down the road to the meadow next to that barn.  Pregnant sheep in deep snow are like deeply loaded boats in a high swell. They rise and fall but they don't make much forward progress.  Being next to the barn will give them shelter and easier access to food.
Then Joe and I called another flock in from a high pasture across the road to the barn and meadow right in front of the house. We moved feeders in place so we could drop food in  from the main road.  One year, it snowed so much near this particular barn that the drifts covered the tops of the fences. Shoveling something that deep is nearly impossible, so the closer we can get the sheep to shelter and the main road, the easier it will be to keep them safe.
We moved cars out to the end of our quarter mile long driveway, since it could take a day or two to get it plowed out.  Joe put the snowplow blade on our four wheeler and he'll try to keep a path open as the snow falls, but if we get the wind that's predicted it will soon blow shut and he'll have to go out again and again, just like this picture from last year. 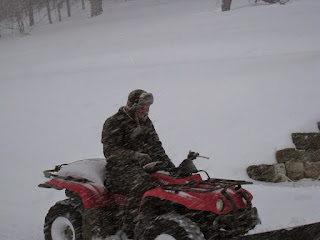 We filled our woodbox and made another pile near the house.  One of my first tasks after the snow ends will be to shovel a path out to that pile.
The last thing I did before coming in to write this blog was fill the bird feeders.  I don't like wading through knee deep snow to do that.
After the snow falls, round two will start.  My chickens are a half a football field away from the house.  I usually end up hand digging a path out there so I can feed and water them.  The dogs will be allowed to sleep together so they can stay warm, but their house will have to be shoveled out as well.  We will have to shovel all of the gates to the various fields open and shovel a path to the root cellar.
It's a lot to think about and worry about, but after almost thirty years of living here, I've learned that worry never changes anything and eventually we always find a way to get things done.  That way often includes the help of neighbors who will start calling to check on each other as soon as the last flake falls. We have helped neighbors remove heavy snow from barn roofs and on more than one occasion, I have awakened to the sound of a neighbor on his bulldozer plowing us out.
A snow of this magnitude means that generosity of the same magnitude will abound, so I think I'll pour another cup of hot tea and curl up in front of a window to watch the show.  It's going to be beautiful.
Posted by Ginny Neil, The Singing Farmwife at 2:22 PM No comments:

It's definitely winter outside and so my usual sunrise walk with a friend was cancelled.  Our rule is: if the temperature falls below 20 degrees and the wind is blowing, the walk is cancelled.  But, by 10:00 the wind had calmed a bit and the temperature had risen to 25 degrees.
If I don't get outside, I get cranky, so after some post-Christmas clean up (yes, I just took my tree down), I bundled up and stepped out.  I decided to avoid the road today and instead meander the fence-line of the field in front of my house.  That way Luke, my beagle, could walk with me.
This field is one that I see every day from the north and west facing windows in my house.  A river runs through it.  There are marshy ditches, a small copse of wild apples, an abandoned graveyard, and a tiny cliff. I decided on a path that would visit them all.
The copse of wild apples was a delightful surprise.  From the house, it's just a tangle of trees, but the cows spend much of their summer meadow-time hanging out there, and I discovered a path that they had tamped and trammeled right through the middle 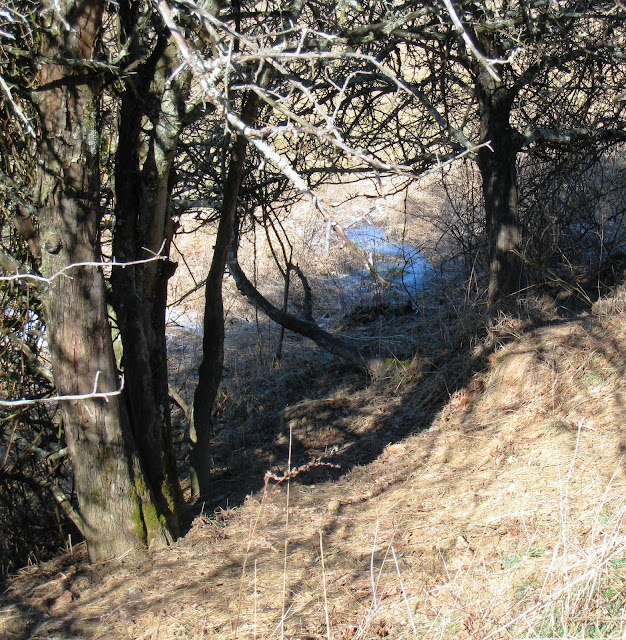 At the bottom edge, the path dissolved into a marshy ditch which was covered with a sheet of glassy ice, giving me a clear view of the bottom. While there were no signs of life, there was evidence.  Tiny holes dotted the silt and, although I guessed that they might be signs of the tiny peeper frogs who sing up spring, when I looked it up I found I was wrong.  Spring Peepers sing and mate on the edges of thawing puddles, but they hibernate under leaves and bark, sometimes freezing almost solid before spring wakes them up.  I don't know what made the little holes that I saw.
Next, at river's edge, I discovered beautiful cones of ice, around the bottom of each stem of grass that grew in or within splashing range of the water. 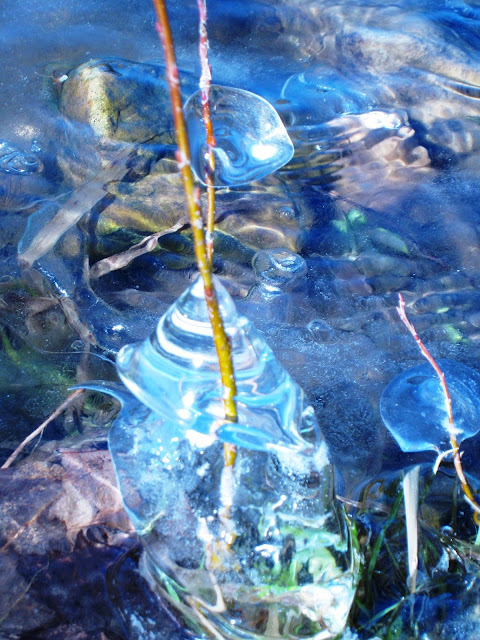 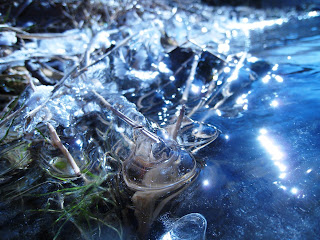 As I walked, Luke ran circles around me, seeing with his nose things I could only imagine.  At several places he stopped and rolled onto his back, grinning in upside down delight.  I wonder what marvelous dead animal perfume he found? Perhaps Eau de Decayed Skunk or Parfum de Possum. Although I couldn't see the remains of his wiggly euphoria, we did discover tracks in some of the snow, evidence of a cat, maybe mine, prowling through the night. 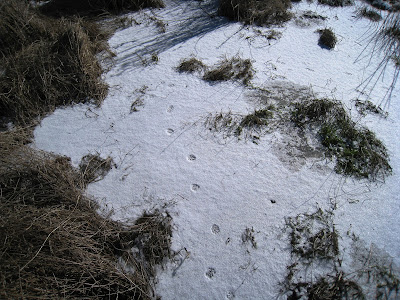 One set of tracks was older, left in the snow when it was mush.  Last night's freeze had turned each print into a lattice-work of crystals. 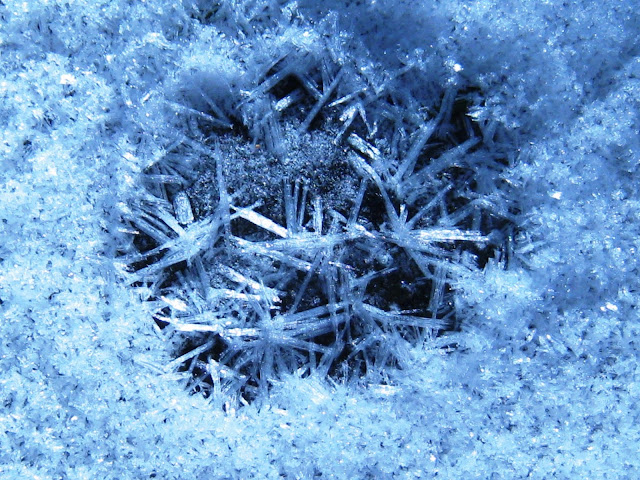 As we left river's edge and turned toward the barn, the wind was no longer at my back, but biting my cheeks and nose.  The lee of the barn was a quiet reprieve, almost warm where the wind couldn't blow.  No wonder the sheep spend all their time there. 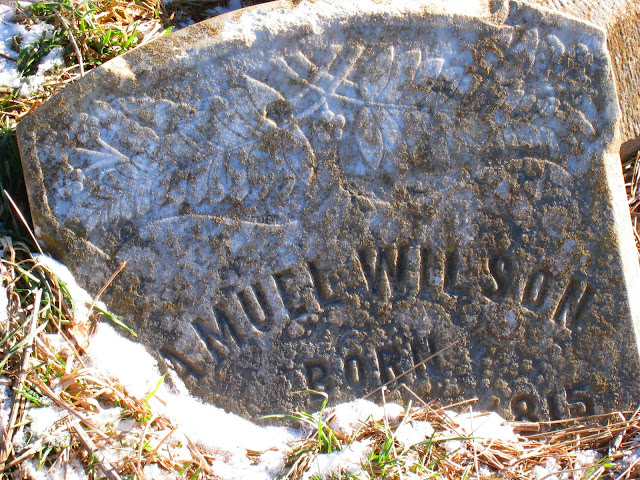 As I climbed the last hill on the way to the house, I stopped in the graveyard to pay my respects to Samuel Wilson.  His stone is subsiding into the grass, helped along by the tunneling of at least one groundhog.  Above the stone, a lone bird's nest had pocketed a bit of snow. 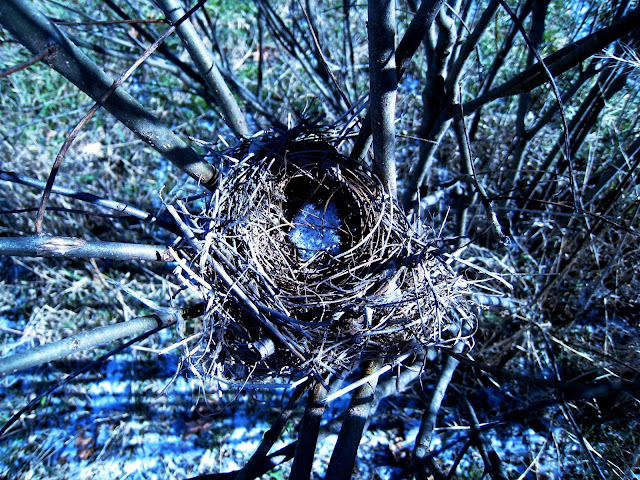 Finally, I made my last right turn, and followed the fence home.  The brisk wind bit my nose and cheeks, making the warmth of the wood stove a welcoming friend.
Posted by Ginny Neil, The Singing Farmwife at 10:10 AM 1 comment: