Feeding Time on the Farm

Where are the peepers?  Usually this time of year is “looking forward to spring” time because I’ve heard the peepers and seen the robins and red-winged blackbirds.  But, spring seems to be on vacation.  Perhaps she’s stuck on one of the Carnival Cruise ships.  Instead of peepers and robins, we have sleet and snow.  That means that we are still spending a lot of time feeding cows.
So what does all this feeding entail?  Well, when Joe is feeding round bales he just lifts them with the tractor forks and loads them onto the truck.  But, when he’s trying to clean some square bales out of the barn, he lifts and loads his wife.
My age has made getting into the bed of the truck more complicated than it used to be.  I grab my right knee with both hands and lift.  It takes three or four tries before I am successful in planting my foot on the bumper.  I bounce a few times,but  I can’t pull myself up , so Joe helps me by placing a hand under my rear and lifting.  In our early days, I would have considered this move flirty, but now I just consider it necessary. Then, it’s my turn to give him a hand up so he can climb into the mow and begin throwing hay down into the truck bed.  The bales hit the truck with a thud and I make sure I’m out of the way.  Not because I don’t want to be hit, but because this barn sheltered a very large group of cats this winter.  Each bale that bounces down brings a shower of dried cat poop.

There’s an art to placing the bales so that they will stay on as we rattle over the frozen ruts.  This is a time when my age is an advantage.  I’ve done this enough to know the pattern and I’ve also learned how to use the physics of leverage and momentum to get the bales onto the top stack.  Finally, the truck is loaded and I crawl off the back, open the gate, and climb back up into the bed.  Joe puts the truck into low gear and I get ready to cut strings and scatter bales.
The steers hear the truck and come running.   I love this part.  We inch along and the bales fall with a soft swish to the ground, making a road of hay. 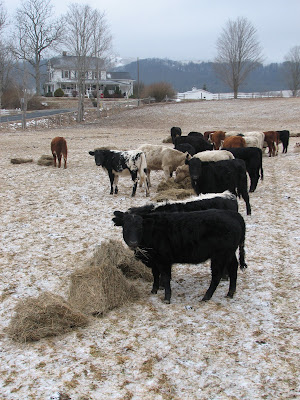 When we finish, we head back to the barn to load up again for the next field, where we keep our cows and calves.  Joe counts heads as he drives along and discovers that a calf is missing, so when all the bales have been dropped, we drive across the river and scan the fields.  The calf is hidden among some brush and dried grass.  Joe positions the truck so the calf can’t see him sneaking up.  With tagger and bander in hand, he captures the little bull baby and gives him a new numbered  earring and a band on his little balls. 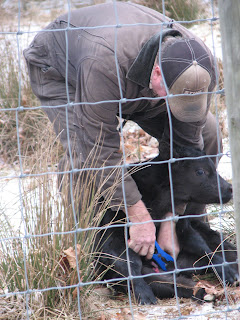 Mama cow, who is two fields away, hears his loud cry and comes running.  Her udders bounce and sway as she gallops across the frozen field.  By the time she reaches us, it’s all over and Joe  has released the calf.  In his hurry to get back to mom, the calf sticks his head through the fence rather than going around, so Joe has to free him and lift him over.  No wonder my husband has some back issues. 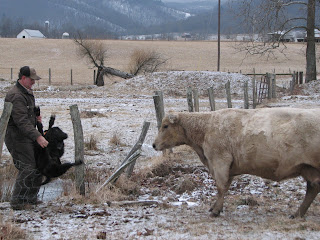 Now that the cows have their supper, it’s time for us to get ours.  We turn and head for home.  As I look back, the baby bull is getting his supper, too.
Posted by Ginny Neil, The Singing Farmwife at 5:11 PM 1 comment: Links to this post