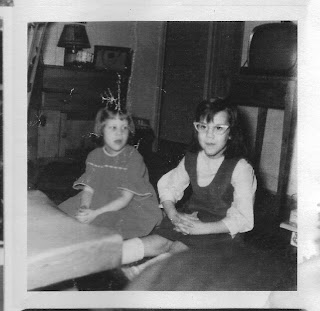 When my big sis was five and I was three, she was so shy that I had to walk her to kindergarten for her first day of school. I don’t remember doing this, but it’s a story my mom has told often. As we grew, we remained best friends when we weren’t bickering over clothes or boyfriends and my shy sister blossomed into a leader and my hero. I remember days when Mom sent us to our separate rooms for fighting and we managed to rig a telegraph line between our upstairs windows by leaning out and swinging a string until we were connected and could clothesline messages back and forth. Then we grew up and moved away from each other, but the conversation never stopped.
One of my favorite traditions with Meg is our sister trips. Originally they started with her travelling to the mountains to see me, or me travelling to Atlanta to see her, but in 2007 I was selected as Virginia’s Educator of Excellence and receiving the award required me to attend a gala in Washington, DC. In need of a dress and some advice about taxis and tipping, I flew to Atlanta to conspire with my more sophisticated sister. As we visited the dress shops, I shared my fears and Meg offered to attend the gala with me. She’s a world traveler who is unfazed by airports and bellhops so I eagerly accepted her offer. Suddenly the idea of navigating the city sounded fun. It was. Meg steered me through the unfamiliar formalities of a glamorous evening and I was able to enjoy my brief moment in the spotlight. After DC we decided that we’d had so much fun that we should continue the tradition. So far we’ve been on sister trips to Charleston, SC, Dahlonega, GA and most recently Amelia Island, FL. This last trip was a 50th birthday present from Meg to me and as usual, she took care of everything.
We met at the Atlanta airport and because my plane was running a little late, I was in danger of missing the connecting flight to Jacksonville. No worries. As I huffed and puffed my way down the long corridor there was Meg waving a ticket at me. “Here, take mine and get in line,” she directed as she handed me her ticket and took mine. Because she’s a frequent flyer, Meg has privileges that allow her to board each flight early. The plane was crowded and getting on first allowed me to find a place to stow my bag before the bins all filled up. It was fifteen more minutes before Meg boarded and sat beside me. The whole trip was full of small courtesies like that. When we debarked in Jacksonville, there was a rental car waiting and Meg drove us out to Amelia Island where she had booked a hotel for three nights. We spent the sunny days in between roaming the beaches where we gathered starfish by the dozens as they washed ashore, rode bicycles on secluded paths, toured the island shops and galleries, and finally galloped through the surf on horseback. At night, we sampled some of Amelia’s finest restaurants and wine. Like all of my adventures with Meg we moved at full speed until falling into bed at night. I could barely walk when we landed back in Atlanta. But, it was worth every minute. 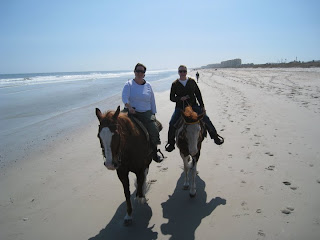 We talked about our fears, our dreams, our families and our frustrations. When we finally separated at the Atlanta airport, me headed to Richmond, Meg headed home, I cried. While the sister trips are fun to plan and even more fun to enjoy, the best part of all is just spending time with my big sister. A sister who is your best friend is a treasure beyond counting. I have riches beyond measure.
Best Friends

When mom
banished us
to our rooms
for fighting
we
dangled a string between
our separate windows
and sent secret messages
clotheslining
across the warm brick
then,
growing up
split us apart
leaving the line
between our rooms
to sag
in the wind

now that you live
five hundred miles south
I miss you
and long to
instant message you
with that
tender string
again.
Posted by Ginny Neil, The Singing Farmwife at 7:05 PM 1 comment:

The barn was quiet tonight when we pulled up to check on the sheep. The first group of forty ewes is just about finished lambing, but Joe wanted to make sure there would be no lamb surprises in the morning. This has been an interesting lambing season. One ewe dropped her lambs out in the pasture bottom in the snow and they died before we discovered them. She wasn’t supposed to lamb for another month, but apparently the buck jumped the fence. Two other ewes have lambed out there, but Joe found them in time to bring them back to the barn where they enjoyed a snug stall until the lambs were ready to be turned out.
Another ewe gave birth to quadruplets. Four strapping lambs that made us wonder how in the world they all fit inside. She dropped the lambs out in the small meadow where the imminently expectant ewes spend their days. The quadruplets are several days old now and so far we haven’t had to supplement their mama’s milk with a bottle. As big as a child’s-size basketball, her udder is well…udderly fantastic. The lambs take turns ducking under and butting at it before they latch on and suck. It seems she never gets a moment without at least one lamb bumping her and grabbing on, but she bleats contentedly in her stall, and the lambs are full of pep. I’m certainly glad my boys didn’t have to butt at me that way. Sometimes, after the lambs are about a month old, you can see them out in the meadow hitting mama’s udder so hard that they lift her back end off the ground several inches. Ouch!

Joe has spent almost every afternoon in the old barn, numbering and docking lambs. The mothers wear numbered plastic tags in their left ears and their babies get the same number painted on their rear ends. Tonight I am along to help. Joe catches the lambs and hands them to me where they dangle from my arms with their bellies facing him. If the lamb is a boy he gets a band on his testicles and one on his tail. If it’s a girl, just her tail is docked. After the banding, I flip the lambs around and Joe dips the metal branding irons into the red paint and presses them onto the lamb’s left hip. Then they are placed gently back into the pen with mama who has been nickering softly in concern. The banding hurts the babies for a little while, so they usually lie down in the hay until the pain subsides, but in an hour or two, they will be up and butting at mama for more milk. Banding prevents poop from accumulating in their tails. I’ve seen undocked sheep in the summer, their long tails covered with brown feces. This creates a breeding ground for maggots, so it’s healthier for the sheep to be tail-less. And of course the little boys can’t have all their parts because they can begin to breed at a fairly young age. This would lead to continuous in-breeding and weaker stock.
When we finish, I stand for a minute in the feedway, just admiring all the history in the hand-planed, wood pegged beams that hold up the massive walls. This barn is almost a hundred years old, and looks ready for another hundred years. Then we turn off the lights and climb back into the warm car. It’s been another wonderful date night on the farm.
Midnight in the Barn

For just a moment last Sunday, I glimpsed grace which floated into the small wooden sanctuary of my church and settled on the windowsills with a sigh and glimmer like dust motes in the morning sun. It lasted less than a minute, but its impact still resonates. Holy moments, when they occur, are worth thinking on. There was nothing special about the service other than it was the fifth Sunday of the month, so my friends from all the churches in the area were gathered in the same sanctuary. It’s a tradition I cherish. I had just finished leading worship and a visitor was explaining plans that are percolating for a youth center in town. As I listened to her, that’s when I felt it. Grace. I’m not sure if anyone else was aware of the sudden clarity that made the air in the sanctuary feel like a baptism in a clear mountain stream, but I was and it stayed with me the rest of the day.
My heart may have been ready to feel that grace because I had spent the day before with a dear friend on a road trip to Bristol. Mary Lou and I went there to see the play “Bridge to Terabithia” and hear its author, Katherine Patterson talk. Mrs. Patterson said that we’ve “lost what is beautiful and joyful, and the best books for children help them look at the world with a sense of wonder that puts them in awe of ordinary things.” She said “a taste of wonder may well give the soul a proper hunger for the Bread of Life.”
I taste wonder every day when I look out my windows at blue mountains against bluer sky, or drive to work down a valley road lined with white barns that glow pink in the early morning light, or lift my eyes from my desk to see a dogwood tree full of black birds and red berries. But, I taste it best when I am with friends and family who love God. I also glimpse God’s grace best in their company. On Sunday morning my plain clapboard church was full of plain folk worshipping, and worship is the language of wonder and grace.
I looked up the word "worship" in my thesaurus and it gave me adoration, love, reverence, respect, devotion and prayer. On Sunday all of those things danced together so beautifully that the sanctuary glowed with it. My friends smiled and lifted their faces in joy and I knew. Light has come into the world and the darkness cannot overcome it.
Posted by Ginny Neil, The Singing Farmwife at 4:56 PM 1 comment: