Pseudacris crucifer.  It sounds like the name of a really loud rock band and in a way it is.  The spring peepers are calling from puddles all over the county and their shrill song, like those of many rock bands I can name, is deafening.

I’ve been on a mission to photograph these diminutive choristers, but even when I’m sitting next to a vernal pool, with calls flying back and forth so loudly that they hurt my eardrums, I cannot see the little frogs.

I started trying to capture them on film last week.  Dressed in muck boots and rainwear, I went for a walk through the soggy bottom behind our house. 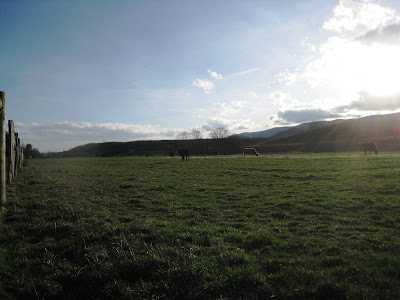 The peepers were in full chorus.  I had my camera and a net, because I was hoping not only to capture a photo of frogs singing in their native wet spots, but also to hold one in my hand and photograph it so I could have a size reference.

The calls lured me deeper into the muck and at one point I sank to mid calf in soft silt, but every time I got close, the frog song stopped. So, I tried  sweeping my net through the watery mass of tangled grass and reeds.  I brought up hundreds of salamanders, but no frogs. 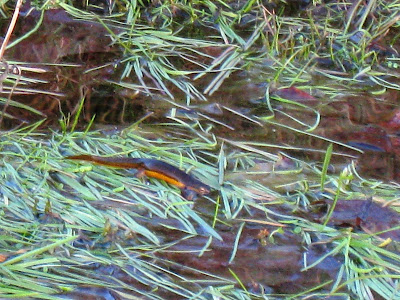 Next, I moved to a high spot where I could see the puddle and settled in to wait.  The frogs were singing when I sat down, but stopped as soon as I settled.  It took 25 minutes for them to ignore me and start calling again.  One lone peep in the distance was soon a roar of beeps, trills, whistles and buzzing that moved toward me in a wave of sound. 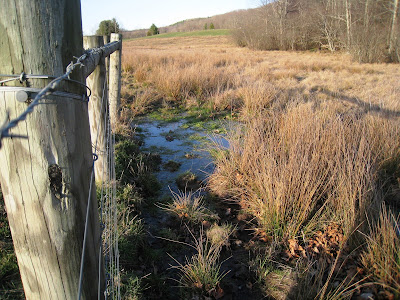 Finally, I saw three little heads pop up above the floating plants, and then the frogs scrambled up, took a deep breath, extended their chests, and started calling.  The light was beautiful, soft and gold, and the little frogs glowed as they belted out their love songs. I pulled out my camera for some pictures and a light blinked on. My battery was dead.

I watched a little longer and then splashed my way back to the house.  I’d try again tomorrow.
It’s now a week later.  I have visited the same little swampy spot every day that it wasn’t raining.  The frog chorus swells around me as I sit quietly, but the little bug-eyed hoppers will not show themselves.  Five soggy trips have yielded nothing but salamander sightings.

Yesterday, when I went into the third grade classroom to teach a lesson about weather, one of the third grade boys raised his hand.  “Mrs. Neil,” he said.  “Look what I got.”  There was a jar on his desk, with holes poked carefully in the plastic lid and sitting in repose were two spring peepers.

“Oh, it was easy,” he said.  “I went out and scooped them up with my hands.  I can catch you some more if you want. It only took a minute.”

“How long did you have to wait before you saw them?”

“I didn’t have to wait.  They were just there, right on top.  There were a bunch.”

I stared at him.  “A bunch, just sitting there?” Apparently this little boy knew some frog voodoo magic.

“Yeah, I shined my flashlight on them and scooped them up.”

The secret of frog stalking was revealed to me by an eight year old boy.  Night.  Frogs were best seen at night.  Of course.  Unfortunately, my camera doesn’t do night photos, so I went out again when I got home from school.  The frogs were louder than I had ever heard them.

I waited until just about dark, and finally a little green Caruso raised his head above the water.


I took his picture before he sank back down.  He never did sing for me, but I have his picture. Although it's not the beautiful one I missed, the one with the gold washed frogs belting out their lovesick longings, it's still worth all those trips through the muck, to me.

Posted by Ginny Neil, The Singing Farmwife at 7:27 AM No comments: