When the weather changes from cold and rainy to warm and sunny, then it's time for the sheep to get out of their wooly coats.  We've been working on shearing and I've managed to avoid most of it this year.  It was an informed decision.  I have done my share of helping and was happy to pass that chore on to my children.  Isn't that why we have them?
But, with the opening of the family's second small engine repair shop, I've been trying to be more of a team player and help with duties I thought I had left behind me.  One of those was dingleberry duty. When my husband asked if I could help with the shearing, so he and my oldest son could keep the shops open, I agreed.  I thought I would just be doing modified Gate Girl duties: opening and closing gates and handing out syringes, so I dressed in my favorite new, blue designer overalls. Perfect for opening and shutting gates because my shirt would stay tucked in no matter how I moved.       I did open some gates, but then I was recruited to wade in behind my youngest son and mark the sheep he was doping. I might have refused if he hadn't been away at school for so long, but like any mother, I am game to do anything for a little quality time with my boy.  Including going into the doping pen.  For those of you unfamiliar with that term, it  means we were worming sheep.   Scott had a  back pack full of wormer on his back and a device to squirt it into the mouths of the sheep. 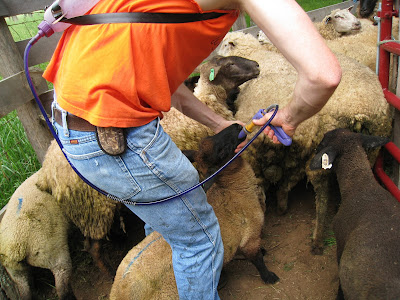 The sheep don't like it and back away as it is being squirted in.  My job was to stand behind my boy, blue marker in hand, and mark the sheep he'd done so no one got a double dose.  Every time a sheep backed up, she ground her shitty (and there's no kinder way to say it) ass into my thighs which were clothed in those new designer overalls.  So much for just being a gate girl.  This was the end result! 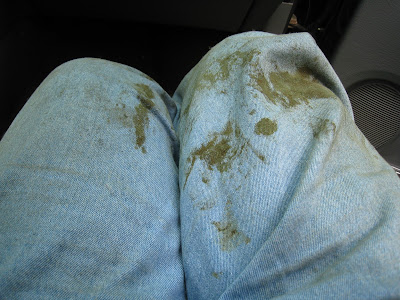 Then, because I was already dirty and I could see how hard my son and Matt our shearer were working, and how I could make their lives a little easier,  I willingly agreed to be the person sorting through the freshly shorn fleeces to pull out dingleberries.  That's what locals call the by-products of grazing on fresh grass. The grass this year has been especially moist and juicy, leading to moist and juicy dingleberries.  Dingleberries are one of the main reasons that sheep have their tails docked when they are young.  Imagine a whole tail full of squishy, brown ornaments.  It's especially inviting to flies who like to lay eggs in the warm, moist environment.  Eggs that eventually hatch out into maggots.  I am thankful that there were no maggots in any of our dingleberries.

I wore my blue latex gloves, but by about the 20th sheep, the lanolin had completely destroyed them.  The last thirty sets of dingleberries were removed with my bare hands.  The only way to get through an experience like that is to remind yourself over and over that it's really just grass and water in a totally different form.  Very different form. 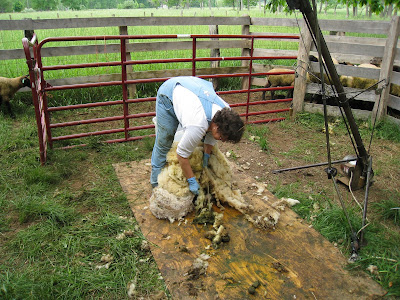 We finished the sheep in the first pen and moved on to the second one.  Scott packed wool, so after I did dingleberry duty, I rolled the fleece into a tight ball, placed it in a box and handed it up to him so he could squish it down.  We tried to get about thirty fleeces in each bag. 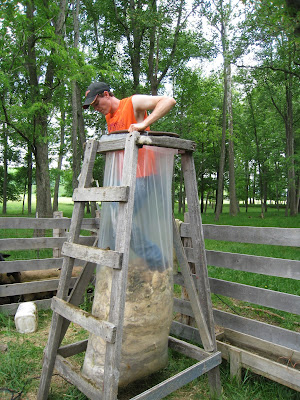 By the end of the day, we had processed fifty two sheep.  Matt said that was an easy day for him as he often does about a hundred.  Made me thankful not to have dingleberry duty on one of those days.
But, I was glad I did it.  We had as good a time as you can have working in hot humid weather with stinky sheep.  I learned some more about shearing listening to Matt tell stories as he worked.  For instance he has switched to using a plywood board to shear on as opposed to the green felted rug lots of shearers use. He said it makes it easier to keep the sheep down because they can't get a good purchase on the slick wood if they try to get up.  He did buy special shoes for it though. 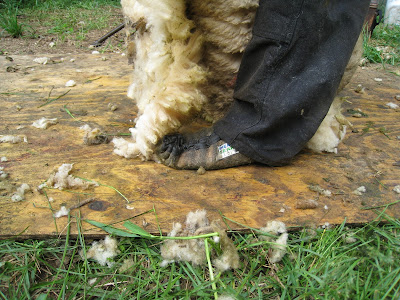 They are made of felted wool and give him good traction on the slick surface.  It sort of evens the playing field when he's trying to sling a 300 pound buck around.  Matt also told me that a friend once told him the best way to shear a heavy buck.  If all else fails, shear him any way you can.  Sit on him, lie on him or even stick a bit of wool in his mouth so he'll worry about that and forget about you.  Matt said he tried that last one once, but all that happened is the buck bit him and then hopped up and ran away.
At the end of the day, the ewes and bucks all seemed grateful to have that hot, heavy layer removed.  They'll stay cooler and cleaner, now.
And as for my designer overalls?  Two washings later, the green stains have almost faded from view.  From now on, when I wear them,  those faint spots will remind me of a beautiful day spent with my son.  Dingleberries and all.
Posted by Ginny Neil, The Singing Farmwife at 3:05 PM 3 comments:

BAAAA! BAAA!  Daggone it!  The two lambs have spotted me sneaking around the shed.  They spring up from their resting place in a patch of clover and chase me down.  BAAA! BAAA! BAAA! They are insistent, butting my knees, nibbling my fingers, even jumping up and planting their hooves on my belly.  They are looking for my udder, which is usually in the form of a plastic bottle with a red nipple, but I am weaning them, just as their own woolly mamas might, if they hadn't abandoned them.
I have complete sympathy with those curly-fleeced moms right now.  I'm also trying to abandon the lambs, but not having much luck.  This time of year, walk into any pasture full of sheep and you will spot wooly rumps bobbing into the air as lambs kneel under their moms and grab a quick suck.  The lambs are half as tall as their moms and when they nurse they pile drive the mama sheep's legs up off the ground.  My two little orphans are capable of some pretty muscular moves themselves.  That's why I've taken to sneaking around the shed these days.
When they first came to me, they were so cute.  Big eyes under wooly bangs, knobby knees, flickery tails.  I don't usually name the lambs, but because Joe told me these were mine to keep for breeding stock, I named them Carol and Dotty.   Dotty wouldn't drink much.  For the first two weeks of her life, she was a sheep sommelier as she smelled, then tasted, then sucked in each mouthful of Land O Lake's finest which she rolled around her tongue until she could determine its vintage. Each swallow was followed with a plaintive baa that clearly said, "This is not my mother's milk."  It took fifteen to twenty minutes for her to finish a bottle.
Carol, on the other hand, sucked her bottle down like a thirsty construction worker at a bar on a Friday night.  She was done in two minutes and, drunk on cream, she became aggressive, pushing Dotty away as she attempted to steal some more milk. Each night was a struggle.Then the dog attacked Dotty and I had to bandage her on a daily basis.  That's when I discovered that she loved to be held just like a real baby. Cradled in my arms, she tucked her nibbly lips underneath my chin and sighed contentedly as I wrapped and unwrapped bandages from a front and back leg.
I know better.  I really do.  If calves or lambs become pets, then they become pests.  And eventually pests become dangerous.  But a face framed in cloudy white fuzz was my undoing.  Dotty was just so darn cute.
Now, she and Carol have grown into cute assassins.  If I'm not careful, they'll take me down.
There's a third lamb in the barn.  Scott discovered it two weeks ago, out in a field limping pitifully after the flock.  It had broken the top part of its back leg.  This new lamb is confined to a small pen until the leg heals, and every day I am responsible for bringing it some fresh grass and water. This has complicated my life because when I am crawling around on all fours tearing up handfuls of grass, I resemble a ewe.  When Carol and Dotty spot me, they sprint over. Both of them slip their heads beneath my belly and  pile drive my back end up into the air.  I gather up the grass I've pulled and I run to the barn.  Dotty and Carol skip along behind me.  This new game is fun.  When I reach the safety of the shed, I slide the door shut. The new lamb is skittish as I dump the grass over into the pen.  That's the proper relationship between lamb and farmer.
BAAA!  BAAA!  BAAA! Dotty and Carol, are circling the barn. I watch them through a crack in the door.  Maybe I can sneak out when they make the next lap.  Then the new lamb takes a deep breath.  "BAAAAA!" it hollers.  The two Lambzillas pull up short and circle back to the opening, poking their heads in as I back into the corner.  They widen the gap and bulldoze through.  With nowhere left to hide, I leap into the pen with  the third lamb. By the time Dotty and Carol give up, the new lamb is nibbling on my ear.

I think I'll call it Franky.  That's short for Frankenstein.  After all, I've just created another monster.
Posted by Ginny Neil, The Singing Farmwife at 8:03 AM No comments: