One of the advantages of being a teacher is all of the nifty presents I get from my students. At Christmas there are the usual coffee mugs and stationary and Russian Tea and homemade jams and boxes of cookies, but my favorite gifts come at other times of the year.
One of the first gifts I was given as a new teacher was a handful of teaberries. I didn’t know what they were and I was a bit suspicious of the grubby hand holding the squished berries. “Go ahead, teacher, they’re good,” Robert said, and so after watching him eat one, I tentatively placed a berry in my mouth. They were good, tasting faintly minty and remarkably like teaberry gum. He grinned and a month later gave me my next teacher gift, a dime-store diamond ring which he had won at our annual Halloween Carnival. Robert waited until the class was quiet and then strolled up to the blackboard where I was writing up the day’s assignments. Dropping to one knee, the gangly 6th grader took my hand and asked me to marry him. I was tongue-tied. Fielding marriage proposals from love-struck boys hadn’t come up in my college classes and I think my blushing “No” probably hurt his feelings. As soon as possible, I sought the sage counsel of my principal who had a little talk with my sixth grade suitor and explained to him why the state wouldn’t allow him to marry one of his teachers.
My first year of teaching, I also received a batch of morel mushrooms and a bag full of ramps. Both gifts were harvested by my students and carried to me in brown paper sacks. I learned a lot about mountain hospitality that year, and even after twenty-eight years of teaching, I can still be surprised by my students’ generosity. Last Saturday, I was in the kitchen finishing up a batch of applesauce, when I heard a knock on the door. When I opened it, I was greeted by one of my eighth grade boys. His father was out in the truck behind him and waved to me as his son handed me a Ziploc bag full of skinned and dressed squirrels. I had mentioned in a class the week before that I had never successfully made squirrel gravy, so his mom brought me some gravy and biscuits the next day and shared her recipe. I never expected to then receive a bag full of fresh-killed ingredients for my own efforts.
I made the gravy and we had fried squirrel with biscuits and gravy for supper. Our visiting minister mentioned at a cover-dish lunch that next afternoon, that, although he had travelled all around the world and eaten some strange and wonderful dishes, he wished he could taste some true mountain food. Imagine my surprise when he said that what he’d really always wanted to taste was squirrel gravy. I believe it was ordained by God that I still had some left in the fridge. I carried him a container full that evening. My friend, Robin, says it is bad luck to thank someone for a gift. Instead you should pass the blessing on. Forevermore, squirrel gravy will remind me of the blessings of gifts given and received in my remote mountain home.
P.S.  For the recipe, check out my other blog Singing in the Kitchen
Posted by Ginny Neil, The Singing Farmwife at 6:03 PM 1 comment:

As the sun sank down into the clear sky tonight, I rested against the farm truck and whistled a reply to the screech owl calling from somewhere on the mountain to my right. I think he was announcing the stars. It’s been a dark fall. Day after day and night after night of cloudy weather has made all the critters, including me, a bit depressed. Our hens, who were averaging 12-14 eggs a day, have lost their motivation, producing nary a yolk for almost a month. My beagle quit eating. The vet could find nothing wrong with her and she withered down to a walking skeleton, with hip bones like anvils, and ribs like a washboard. But, this week, the sun came out and the clouds rolled back and the hens laid three eggs and the beagle ate a bowl of cat food and the owls are hooting for joy.
Posted by Ginny Neil, The Singing Farmwife at 6:52 PM 1 comment:

The monarch butterflies are headed south. I sat on the edge of my garden last week and, in only thirty minutes, I counted 300 fluttering above the zinnias. The generation that is wafting south is not the generation that flew north. In fact there are three generations in between. Somehow the fourth generation knows at the end of August to turn around and start the trip south to the Sierra Madre Mountains in Mexico. This generation is the only one to make the entire trip and will fly up to 3,000 miles home. My classroom full of sixth graders sat outside yesterday to watch and count. The students were unusually subdued, pointing quietly as bits of orange and black fluttered by. I saw wonder in their faces. Our official count was 61 monarchs in ten minutes which we posted on http://www.journeynorth.org/ .
Other insects on the move have found a temporary home in our classroom. We adopted a few fat praying mantis females and brought them in so we could observe the production of their oothecas
(oh uh thee’ kas). The students provided a balanced diet of crickets and grasshoppers which mantids hold and eat just like an ear of corn. Every morning a crowd of kids converged on my classroom for the morning feeding and their favorite part of the show was watching the alien-faced bugs preen like cats at the end of their meals. Finally, a female rewarded us with an egg case and we rewarded her by releasing her outside. The next day she was at our window, tapping with her folded claws until we let her in and fed her. The following day, she came again, but that was the last we saw of her. She will die soon, but we will tie her ootheca to the dogwood tree outside our window and hopefully, one day in the spring, we will be greeted by 1,000 baby mantids tapping at the window in search of lunch. 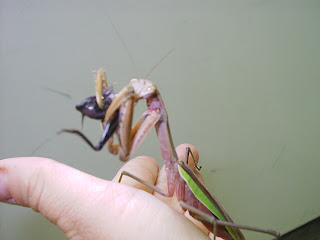 Posted by Ginny Neil, The Singing Farmwife at 1:17 PM No comments:

Email ThisBlogThis!Share to TwitterShare to FacebookShare to Pinterest
Labels: mantids, monarchs, oothecas, to everything there is a season
Newer Posts Older Posts Home
Subscribe to: Posts (Atom)