A Stitch in Time

When I was thirteen my mom offered me the chance to take a sewing class. I made a lopsided sun-dress, and I was so proud of it that I even wore it when we had a family portrait made. My father, not to be outdone, declared that anyone could sew a dress if they had a pattern, so mom gave him a pattern for a simple A-line dress, some material and access to her Singer. Dad did sew a beautiful tent. We still laugh about it at family dinners.
Learning to sew has been a most valuable skill. It’s not my favorite activity, but I always love the fact that I can create something I need, and I’m comforted to think that when the next depression rolls around, I have enough skills and scraps to avoid complete nakedness. I’m still way too impatient to attempt anything very complicated like sleeves, but I have made my share of skirts, curtains, tablecloths and slipcovers. Yes, you read that right. I can’t construct sleeves but I can create slipcovers from scratch. Women in third world countries provide all the inexpensive tops I might ever need, but every time I price a new couch I end up buying some bargain fabric and stitching together another slipcover. Like my first sundress they’re a little crooked, but they cover all the necessary places.
My first slipcover came about as a result of nesting instinct and an extremely hot July. I was eight months pregnant and craving a comfortable loveseat. I found one at a junk shop.  It was cheap but ugly, so I borrowed my mother-in-law’s sewing book and found some vague directions for constructing slipcovers. I spent the next month of sleepless, hot nights measuring, cutting, cursing, tearing out stitches, re-measuring, re-sewing and finally successfully re-covering the second-hand loveseat I’d found at a junk shop. That loveseat has been through two additional slipcovers in the nineteen years since Scott was born and recently I’ve begun pricing sofas again. Sigh…. I think I see another slipcover in my future.
My grandmother was a whiz with a sewing machine. Many of my favorite dresses were handmade by Nana. When I attended cotillion and needed a special velvet dress for the Christmas ball, Nana and I picked out the pattern and the material and two weeks later I was a princess. She was old, but she was hip. One time, when I was drooling over a black watch plaid, knife-pleated wool skirt in an upscale department store (I believe we had gone there to buy bras), Nana whipped it off the hangar. I thought she was going to ask me to try it on and then offer to buy it for me. Instead, she flipped it upside down and held the hem up to her nose with one hand. She straightened her other arm, sliding the material through her fingers and counting. I watched the hemline moving from Nana’s nose to her outstretched hand like an inchworm. “Three yards,” she said. “Remember that.” Then we drove to the fabric store. She led me to the fine wool section. “See anything you like?” she asked. When I had picked out a plaid, Nana bought it, some buttons and thread and two weeks later the skirt I coveted was hanging from my waist. Nana even made a matching vest.

I will never have Nana’s prowess with a needle, but recently I’ve stitched some gifts for three dearly beloved graduates. Each of them gave me a stack of at least twenty tee shirts that were won, bought or earned throughout their high school careers. These were cut into forty squares with the logos intact. I stitched them together, plus a square cut from a tee shirt of the graduate’s future college. The resulting quilt top was then sewed to a backing and hand tied so it wouldn’t disintegrate in the wash. Both my son and my nephew take their quilts everywhere they go, and my most recent creation will soon be headed to Virginia Tech with my lovely “first daughter” Hayley. 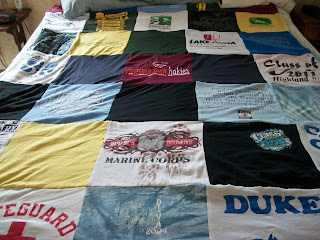 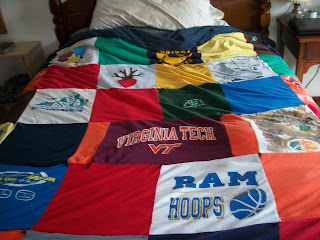 Sometimes I worry that kids raised in the Walmart age won’t have the advantages I had growing up. I’m thankful to have had a Nana who taught me that a sense of accomplishment can often be found with a needle, thread and a little inspiration. 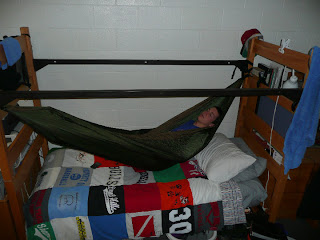 Posted by Ginny Neil, The Singing Farmwife at 7:40 AM 4 comments: Links to this post

Email ThisBlogThis!Share to TwitterShare to FacebookShare to Pinterest
Labels: needle and thread, sewing

Do Bears Sit in the Woods?

Caroline and Lori and I are hiking our way across Highland. Our first hike was last week and started at the summit of Shenandoah Mountain in the George Washington National Forest. The morning was cool and foggy and we had two choices for hiking. There was a faint trail running north, marked by the occasional yellow diamond and there was a forest service road heading south. Since it was foggy, we decided to hike the road.
The first half mile was a gentle incline. Within three minutes I was sweating enough to fog my glasses. I peered helplessly through the condensation wishing for windshield wipers as Lori and Caroline pointed out deer sign and salamanders. The trail followed the ridge top, climbing and descending several times, but the fog was too thick to see the views. Before our walk, we had had a serious discussion about what to do if we met up with a bear, so we were a bit jumpy. The heavy fog made it worse. It closed around us like a heavy, wet blanket and we couldn’t see very far into the woods.  About two miles up the trail, we almost stepped in a large pile of very fresh poop. We circled it suspiciously.  What does bear poop look like anyway?  The gray woods began to look even more ominous. We continued downhill, jumping at every drip and crackle. Surely a hungry bear was lurking behind that tree or that rock waiting to pounce. We made it another quarter mile before we gave into our fears and turned around.
We were moving at a fair trot when we passed the poop and crested the ridge. No bear in sight. The sun popped out and we realized how foolish we’d been, but we decided to call it a day and head back to the car. On our way out, we planted a letterbox in a small camping area.
This week, we hiked trail number two in the Wildlife Management Area just south of McDowell . This trail is also a gravel road maintained by the Game Commission. It is gated in several places but open to hikers year round. We planted our letterbox near a campsite about a mile in and then climbed steadily for two miles. We turned around when we reached the ridge top. In contrast to our first hike, the morning was sunny and bright. Streamers of light dappled the forest floor and birds sang from the trees. The trail followed a pristine stream which we forded twice by hopping across rocks. Deer lifted their tails and scudded across the path in several places and we must have seen thirty orange salamanders on the road. We didn’t even worry about bear. Next week we’ll take hike number three. Hopefully it will be sunny and bright. Fog makes us fearful. I think there’s a metaphor for life in there somewhere.

Posted by Ginny Neil, The Singing Farmwife at 8:21 PM 2 comments: Links to this post