Singing in the Garden

July 31, 2018
It has been very rainy for the last month. I know we've had at least three if not four inches. All that rain has made the garden very happy. 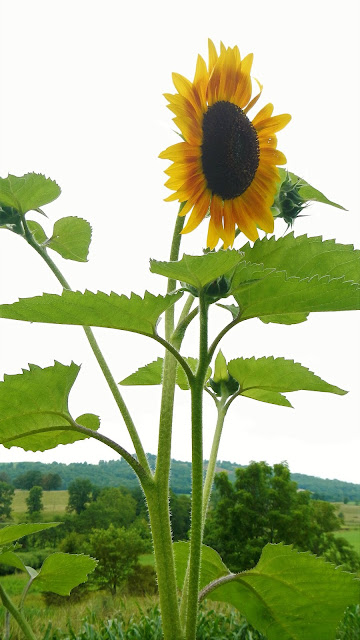 Sunflowers are reaching for the sun.  If only we could get some.... 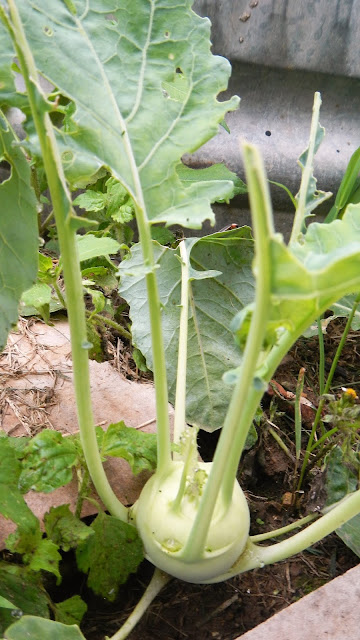 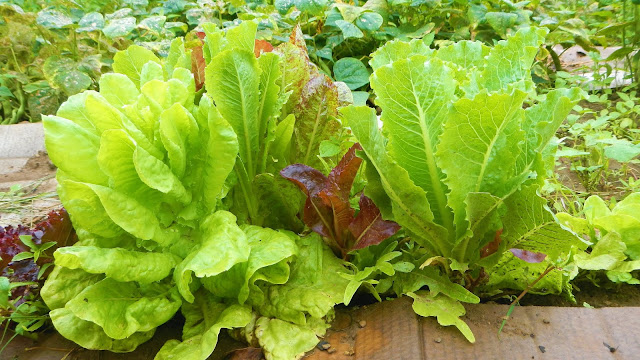 With all this rain, even the lettuce, which is usually done by now, is producing. 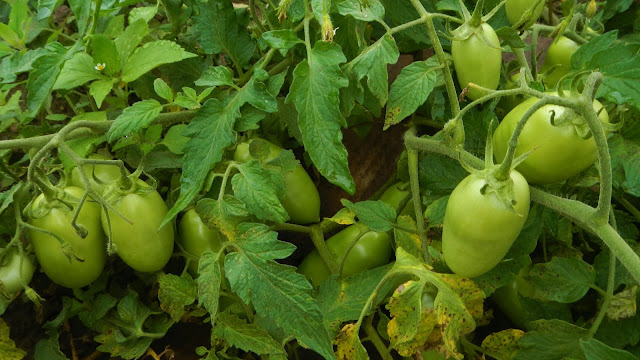 Tomatoes are so heavy on the vine that they've pushed it over. 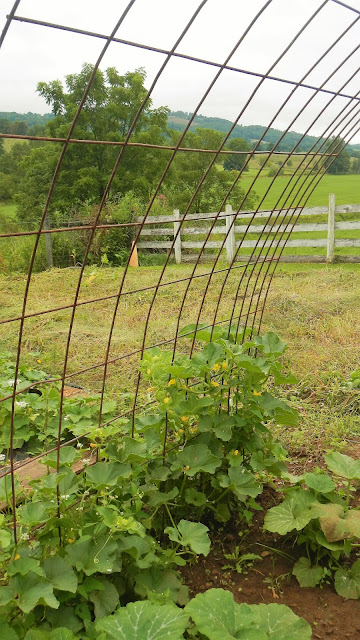 Melons are trying to climb my new tunnel. 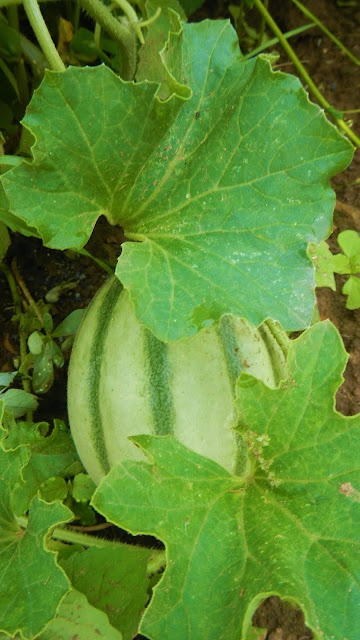 This is a baby Tuscan melon. 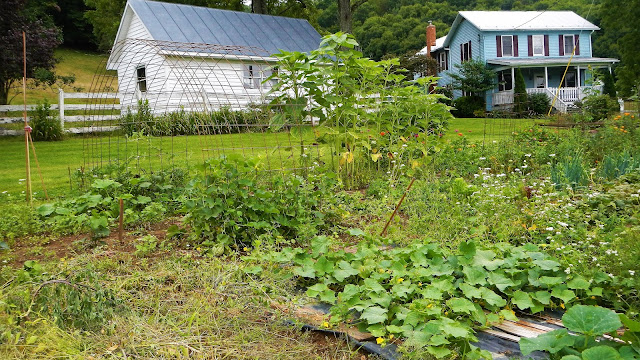 View of the house from the gardens. 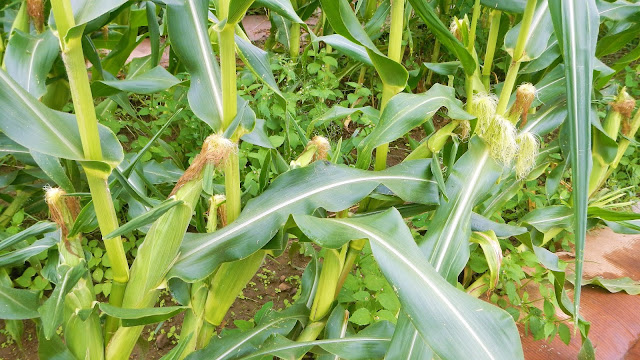 Corn will be ready in a week. 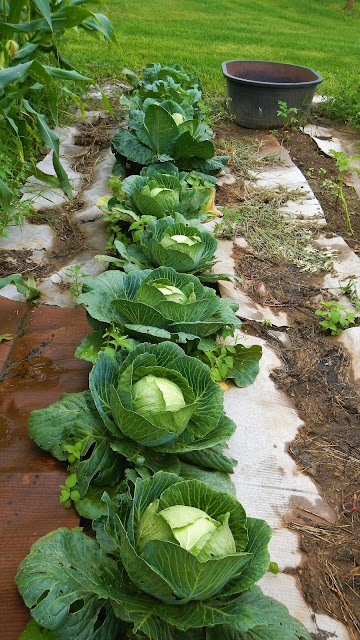 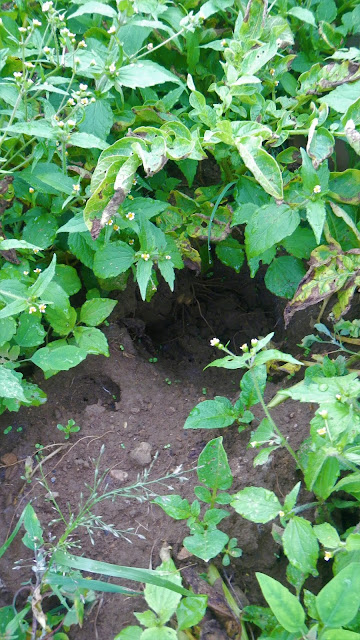 Something's been digging for potatoes in the garden. 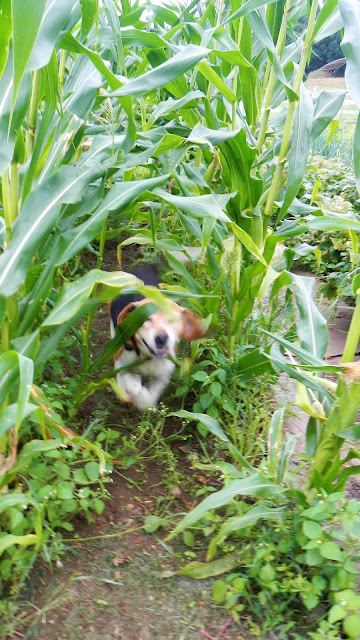 Could it be this fellow? 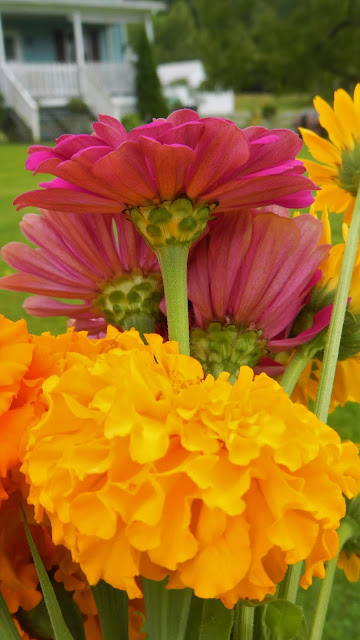 My favorite part of the garden. 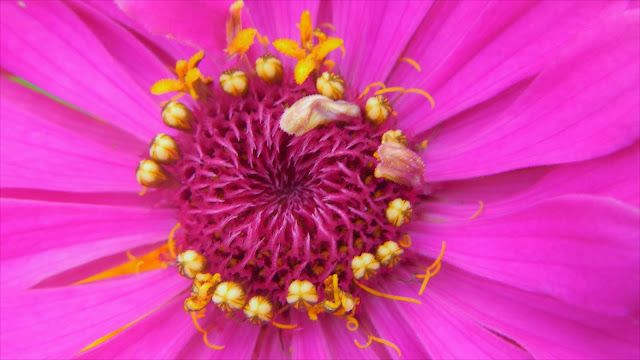 July 9, 2018
I'm trying something new this year.  I saw a photo in a magazine about growing vegetables overhead, using hog panels to create tunnels. 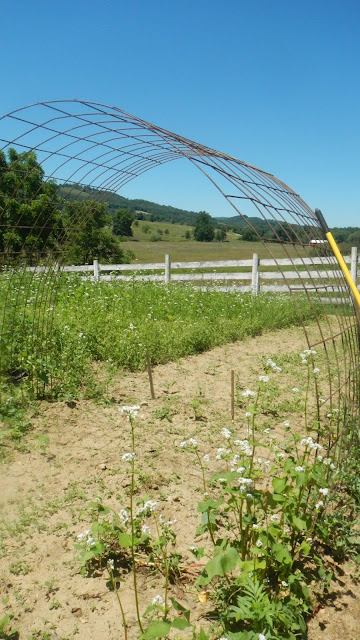 I bought melon, squash and cucumber seeds that are climbers, so we'll see what happens. So far, they look like this: 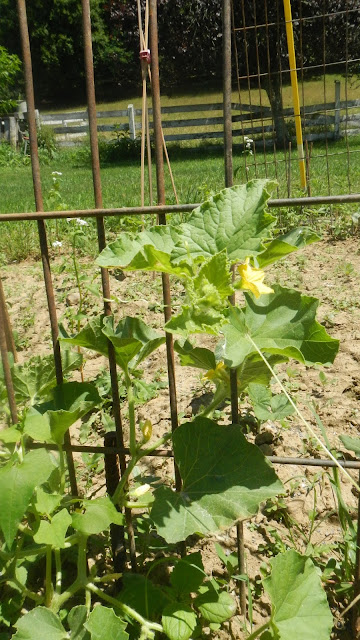 The hog panel was recycled from the farm. It's not the only recycled object I've used. My favorite is Joe's old pedal car.  Every country farm should have a car, up on blocks, in the front yard. Here's mine. 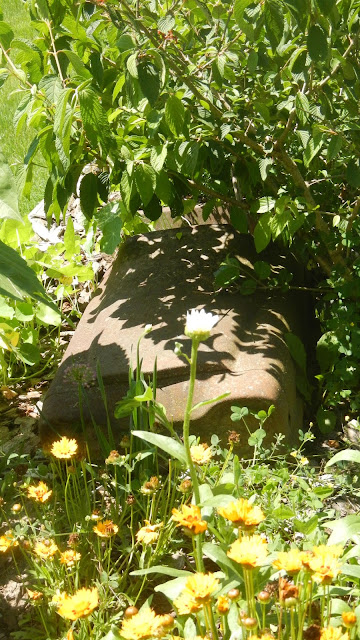 I've also started using recycled cardboard as mulch. As long as it's not shiny, it's okay to use.  This cardboard is courtesy my own farmer, who also owns a small engine repair shop.  Weed-eater boxes, split down the middle are the perfect size for lining paths. 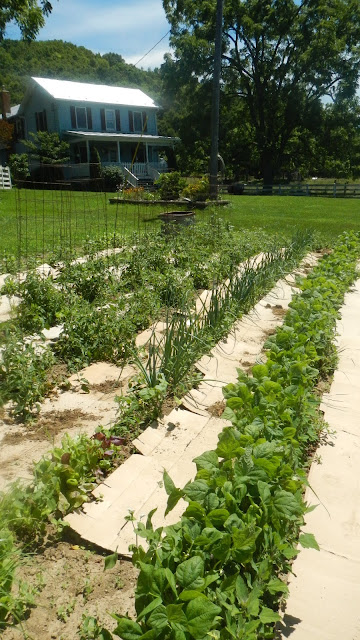 Another favorite recycled item is an old sink we tore out of the house we just re-modeled. 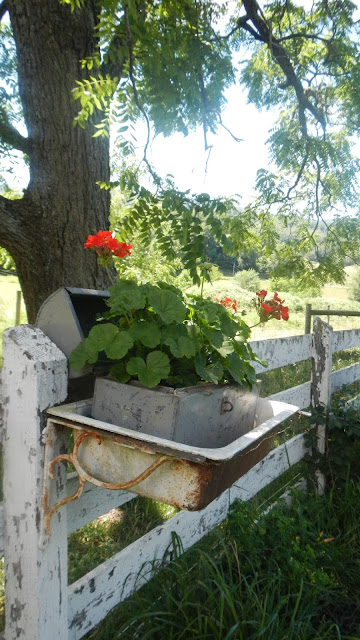 If it's frugal or free, then it's for me!


September 23, 2017
This spring, I splurged and bought a whole pound of zinnia seeds.  As I cut back the veggies in my garden, I am replacing them with flowers.  Joe keeps asking me when I'm going to can the zinnias.  They are the most prolific thing I planted!  Just look.

April 18, 2015
Nancy and I visited the arboretum at JMU two days ago.  It was in full spring bloom, with blue bells and trillium parading over hills and down little valleys. Daffodils, tulips and redbuds were the other show stoppers, and all in all we saw over 30 varieties of things in bloom, including Dutchmen's Breeches which Jan, the tour guide, told me are spread by ants.  Those were some busy ants because the woods were full of the ferny plants with the little "breeches" swaying in the breeze.  I bought two winterberries, a male and a female, a Beauty berry, which I didn't realize isn't zoned for the mountains, and a hardy hydrangea called Limelight which is supposed to live in winters down to 30 below.
It's supposed to get into the high 70's today, so I will plant my new treasures after I spread mulch.
I have just completed burying my bathtub.  I hated to throw it away when we remodeled, so I've held on to it for a whole year contemplating its uses.  Worm farm?  Unusual flower bed?  Outdoor bathing?  Finally I decided to replace my little pot pond with a tub pond.  It took me three days of digging to get a hole big enough to sink it, but when I did and then lined it with black plastic, the result was perfect. 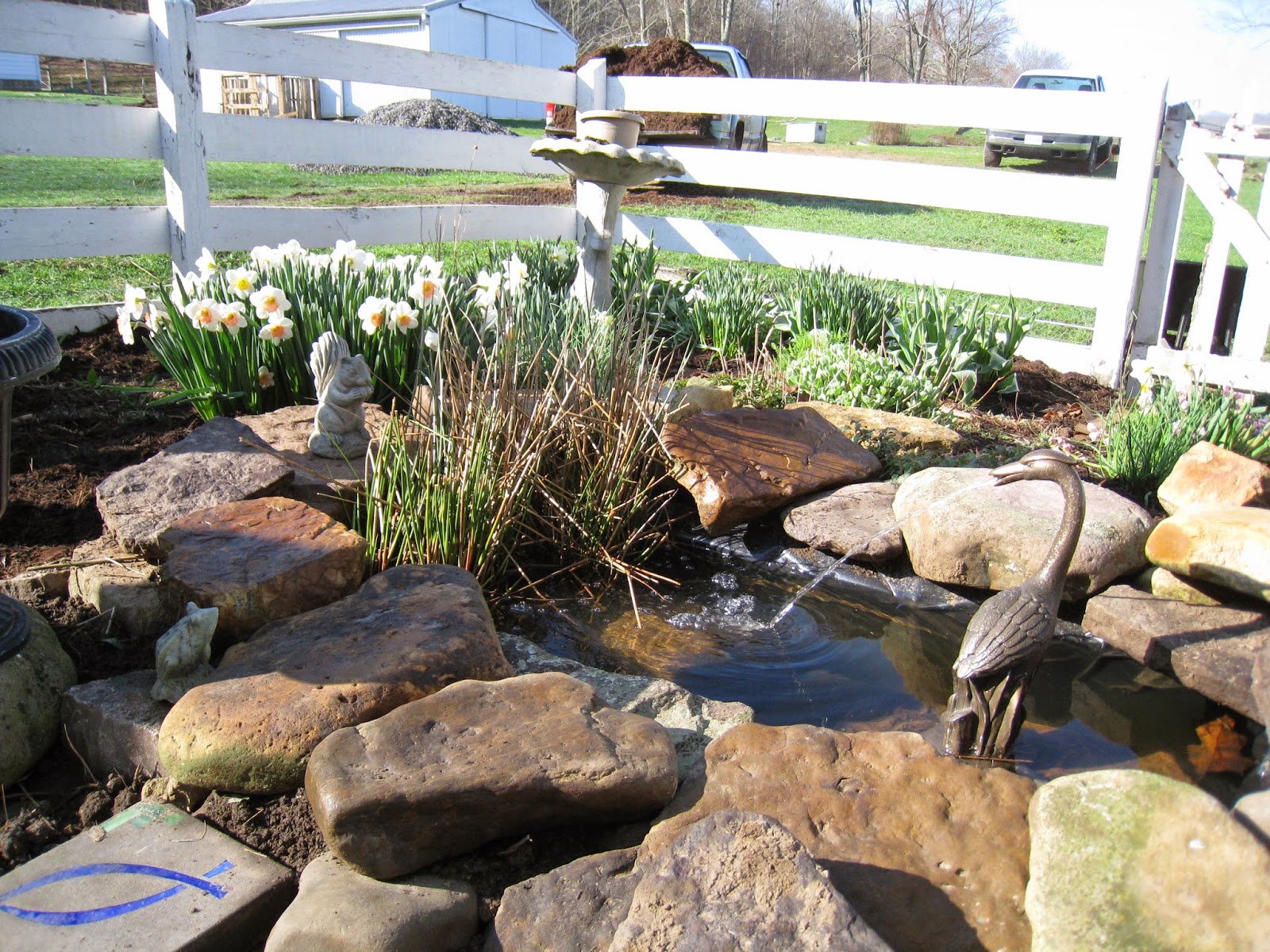 Someday, long after I'm gone, a farmwife will wonder why in the world there's a bathtub buried in the back yard.
My tomatoes, marigolds and zinnias are big enough to set out on the screen porch.  I never got around to planting peppers.

I re-potted my baby tomatoes today.  I have 32 pots of hope. I hope they will continue to grow.  Eight pots are Big Sammich, 4 pots are Caroline's Mom, 4 pots of Millers, 4 pots of Big Boy, 4 pots of Beefsteak and 8 of Roma.  I have lots more seedlings, but no more room under the light, so I've put them in the office window.

Meanwhile the zinnias and marigolds are putting out their first sets of true leaves.
Friends told me it's not too late to plant peppers, so maybe I'll pot up some peppers.  How many pots of peppers shall I pot?  Maybe twelve.  That's about how many I can fit in my living room window.

Outside, I planted a snowball bush beside the power pole.  Geneva always had one and she had walnut trees, so we'll see if this one will grow.  I've tried hydrangeas which look sort of similar, but the winters were too cold.

I also planted 3 white caladiums, 2 purple huaraches and 1 hosta in the shade of my redbud.  I bought the roots at Walmart and they look pretty dead, so I'm not feeling very hopeful.

The last thing I planted today were two peonies.  I have lots of pink peonies on the path behind the house, but no white ones.  I planted these two along the inside of the front fence, where I dug out the little boxwood- like bush.  One of the roots looked pretty good, but the other one was awfully dry looking.


March 25th, 2015
My zinnias and marigolds, or "miracle golds" as Scott called them when he was little are up, so I've brought out my homemade grow light. 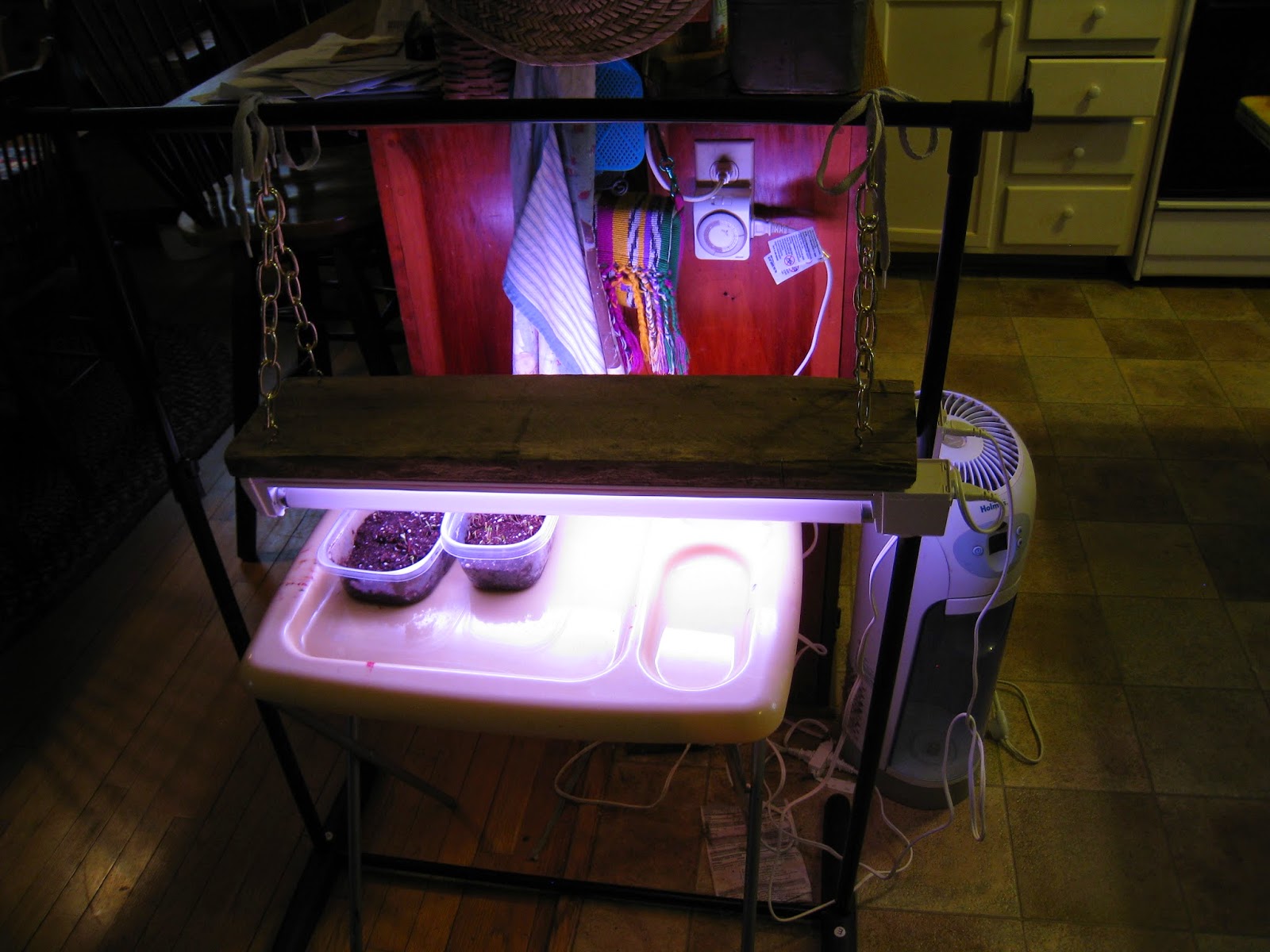 I made it out of 2 grow light fixtures ($10.00 each), an inexpensive coat-rack ($10) from Dollar General, some links of chain, a TV tray and an outdoor light timer.  The whole thing cost me about $35 last year and it's still very usable this year.  I can raise and lower the light by raising and lowering the bar of the coat-rack, so the plants get the most amount of light.

I hope the tomatoes will start poking their sleepy heads out of the ground, soon.


March 22, 2015
I heard the peepers singing a faint song from their thawing puddles last night.  Not many, but a promise of choirs to come.  I've always heard that we'll have at least two more freezes after the peepers sing.  I hope the weather stays fairly cool until those have come so things won't bud out too soon.  The grapevine was trimmed two weeks ago and it's beginnng to look a little "wick" which is a phrase from The Secret Garden that I always loved.  It means that life is beginning to wick up from the soil into the plant.

The chickens are busy in my yard, scratching all of the leaves out of my flower beds as they search for something fresh to eat.  I'll let them keep scratching for another week and then pen them in their chicken lot. I used to fuss when the chickens dug up the beds until I realized that it made it easier for me to finish the clean out.  All I have to do is rake up what they put into the yard.  There's no tangling of the rake in the leftover stubs of plants.

No sign of life from the seeds I planted two days ago.  I'm always anxious until I see them.


March 20, 2015
I started seeds yesterday.  I wasn't planning on it, but a visit to Millie changed my mind.  She has lived and gardened here all of her life and now she's over 70 years old.  Lots of wisdom to share.  When I walked into Millie's living room, two days ago, I noticed some plastic containers of dirt covered with plastic wrap sitting in front of a window.
"Is it time to plant seeds?" I asked.
"Oh yes, and you only have one more day in this month to do it," she replied.
I was puzzled by her answer as it's only the middle of the month.  Then she pulled a small book from the stack on her coffee table and opened it.  It was an almanac and the page she opened to showed the correct dates for planting various crops.  It seems that seeds need to be planted by yesterday or they would be in the wrong sign.
I never believed much in planting in the signs, but then I don't always have the best luck with planting seeds either.  She explained the table to me but I didn't understand it, so when I got home, I looked it up on this wesite:  planting by the signs
Uh Oh! I needed to plant root crops yesterday and wait to plant above ground crops until later when the moon is in its light phase.   We'll see what happens.  If the seeds don't come up by the next light phase that corresponds with a good planting phase, March 26-28th, then I'll replant.
All these years, I've just been trying to figure out when to start my seeds so the plants would be the right maturity to set in the garden by the end of May.  Now, I find out it may be even more complicated than I thought.  I'll let you know what happens.
Meanwhile, I planted zinnia and marigold seeds that I saved last year, along with three heirloom tomatoes I had saved.  I don't know their names, so I gave them my own:  Caroline's Mom, Miller, and Big Sammich. In addition, I planted German, Beefsteak, Early Girl and Roma.
Millie told me I should have started peppers back in February, so I guess I'll be buying my pepper plants this year.

Other things to note:
The robins are flocking on the lawn today.  It's the first I've seen of flocks although I've seen individuals for a while now.
I haven't heard the peepers, yet, but my sister says they are singing in full force in Tappahannock, VA.
It snowed a bit last night and then sleeted.  Oh spring wherefore art thou?