Angels in the Pumpkin Patch

Halloween is tonight and I am happily anticipating at least two or three trick-or-treaters.  My lane is a quarter mile long and not many parents are willing to waste the time riding down it, if they can go to houses closer to the road and get more treats in less time.  How do I know that's how lots of parents feel?  It's because I was one of those tired parents not too long ago.  I had a love hate relationship with Halloween.
Things I loved:  I loved how festive my little town looked with pumpkin faces glowing off of every front porch.  Pumpkins were pretty much all we had to decorate with back then.  I loved Ettie Mae's homemade popcorn balls.  We always made sure to get an extra one for Joe.  I loved walking up and down the streets with my kids and chatting with all of the other parents who were out scrunching through leaves under the Halloween moon.  I loved the creativity of costumes,and handing out candy and oohing and aahing about how clever  the kids had been.  I loved dinner with my neighbors before trick or treating and getting our rambunctious foursome of children ready for the night. I loved seeing the smiles on the faces of elderly people who were thrilled to welcome little ones to their doors.
Things I dreaded:  I had a hard time getting costumes that I felt comfortable with and that the two boys in my household would wear.  Felt was my friend.  Green felt and hot glue for Robin Hood costumes, brown felt for leather-looking vests with cowboy hats, black felt for bat wings. 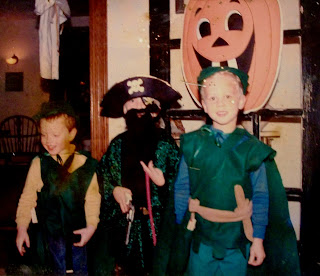 But, I was working and finding the time to make these masterpieces was exhausting.  I also dreaded the houses for trick or treating that we had to drive to.  I would not have driven down my quarter mile long driveway. Finally, I dreaded how divided I felt about the whole thing.
In my evangelistic community, Halloween divides a lot of us.  Some people make their houses dark and hide behind the curtains so they can avoid the appearance of embracing Halloween.  Some people make their houses scary and enjoy the night, but offend some of their neighbors in the process.  I am in the middle.  I love the camaraderie of a community out under the stars with their children.  I love the idea of a night where we can be a little scared and then go home to our safe, warm homes.  Juxtapositions often make things more meaningful.  But I don't want to celebrate evil, and sometimes I worry that Halloween does a little bit of that...gives evil permission to show its face and look fun.
So, this year, I made angel cookies to hand out.  I hope my kind neighbors will bring their little ones to my door.  I will give them an angel cookie made from my grandmother's amazing sugar cookie recipe. Angels are messengers of hope and I want the recipients of my cookies to get a sense of that.  I want them to know that even when the world looks a little bit frightening, God's angels protect his people, watch over us and guard us.  Isn't that a great message for the scariest night of the year?
How do you feel about it Halloween?  I would love some feedback. 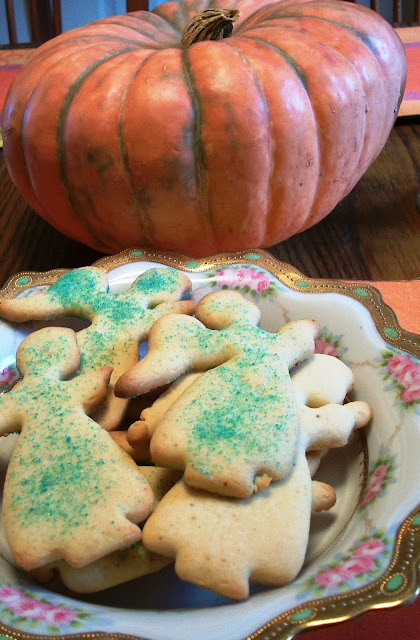 Posted by Ginny Neil, The Singing Farmwife at 9:02 AM 3 comments: Links to this post

Playing With the Professionals

I have been a farm-wife for twenty-eight years and in the high pressure sport of livestock relocation I feel like I’m now qualified to play with the professionals.  I can block a bull, I can screen a sheep, and I can double team a determined calf.  I am my husband’s best female rookie, so when Joe was at work the other day and a call came in from a fellow interested in recruiting one of our rams, I volunteered to go down to the other farm and break it to the young buck that he was being traded.
The ram was hanging out with his friends behind the farmhouse.  With a little help from an assistant, I brought all of the sheep into a huddle.  Game on!  I started shouting encouragement and making hand motions to transmit my intentions, but my star ram was more interested in his wooly female fan club than my frantic coaching.  Finally, we agreed on a fast break, and with a little pressure from the sidelines, the flock trotted down to the loading pens.  Then, I separated the buck out for the trade and asked the wooly cheerleaders to leave.  They departed, demonstrating a few high kicks on the way out.
The buck showed his displeasure in losing his cheerleaders by intentionally fouling my assistant.   I moved him onto the sidelines, confining him in a narrow chute until he got his temper under control.  The cheerleaders, who were now three fences away, kept calling for him to be put baaaaa-ck in the game.  LeBron the Buck looked through the fences separating him from the girls and, with a six foot vertical leap from a standing position that would make any coach proud, he cleared it.  I shouted something that should have resulted in a technical foul as the buck took two running steps and cleared the second one. One fence remained.  Before I could react, LeBron soared over the last fence without touching the rim, and trotted out to the cheerleaders who welcomed him with a victory song…”Na, na, na, na.   Na, na, na, na.  Hay, hay, hay! Welcome Baaack.”
The gentleman who was attempting to recruit LeBron promised to come back another day.  I nodded, but secretly thought that he might want to make a different trade.  No coach wants a player he can’t control.  But, the man did return and this time the pros, Joe and Justin, managed to pull off a win, controlling Le Bron the Buck until he was safely loaded.
The next night, we got a phone call.  As soon as he was unloaded, LeBron demonstrated his vertical jump again, clearing a fence and loping to the goal: his new flock of wooly cheerleaders.  We understand that they were delighted to welcome him and since that’s what the big bucks are for, everyone is happy with the trade.
Posted by Ginny Neil, The Singing Farmwife at 3:47 PM 1 comment: Links to this post