Please Don't Burp on My Porch

After meeting Lori for my morning walk, which starts just after dawn and ends an hour later, I drove home through the lifting fog.  As I rounded the corner of my driveway, I saw a light brown body on the woody hill, about ten yards above the road.   I thought maybe it was one of the calves we have turned in around the front forty, but when I pulled up closer, I could see that it was a doe.
It's not at all unusual to see deer along the driveway.  They often cross it in front of me on their way to and from the meadow out front.  Recently they've been crossing with fawns wobbling along behind.  I always hold my breath when mama and baby approach the fence.  The doe pauses, gathers and springs. In one leap, she arcs over.  The fawn is left behind.  It bleats and my heart stops for a moment. Surely mama won't run off and leave baby.
She doesn't.  The doe waits patiently on the other side, ears and tail flicking, as her baby runs up and
down the barrier until it finds a hole big enough to wiggle through.  Then the two of them bound through the blowing swells of grass until they are hidden from my sight.  Deer that are standing or on the run are the norm.
But, this doe wasn't standing.  I stopped the vehicle and turned it off right below her, and she looked at it curiously.  My windows were rolled up, so she couldn't smell me.  I thought maybe the doe was trying to give birth.  I couldn't imagine any other reason that she would have been rooted to such a public spot.
The doe watched me, ears pricked forward, but she didn't get up and run.One of the gifts of retirement is time.  I wasn't in a hurry, so I decided to just sit still and watch her watch me.  Maybe I'd see a baby born, or maybe she was hurt.  I would wait until I knew which was true.
The doe shifted around, ears still on alert.  Then I saw her relax.  Her ears rotated backwards.  I didn't know deer's ears could do that.   Usually I only see the front, pink centers because the deer are always considering whether to run or not..
Then I saw the doe's throat move.  A tennis-ball-shaped lump rose to her mouth and then her cheeks ballooned out.  She looked like a baseball player with a mouth full of tobacco. The doe began to chew and swallow. Smaller, ping-pong-ball-sized lumps slid down her throat after each gulp.  Once her cheeks were empty, she burped and POOF her cheeks filled out once more.
I know that deer chew their cuds but I'd never seen one do it.  They graze on high alert and then move to a safe spot to regurgitate and finish their meal.  Obviously this doe felt safe perched in plain sight.  While it was a wondrous sight, and I will add it to my list of things I never thought I'd see, it does beg the question.  Have the deer become so immune to humans around them that they will decide to party in my yard and garden?  I hope not.  I don't want to wake up one morning and find them burping and chewing on my front porch. Deer are more beautiful when I see them infrequently.  They probably feel the same about me.
Posted by Ginny Neil, The Singing Farmwife at 4:30 AM 1 comment:

Mondays Can Only Get Verse: Butterflies

It's Monday which means my post will be a poem.  By Me.  Go figure.

I just saw a flutterby
I mean I saw a blutterfy

Oh shucks! the butterfly has flew
so now my silly poem is through..

Caterpillar, small and sweet
it seems that all you do is eat.
You dine on leaves all day and night
and munch until your skin's too tight.

But if you tire of chewing things
and wish to trade your feet for wings
then make a chrysalis of jade
to hang beneath the milkweed shade,
or maybe spin a silver nest
in cherry trees to rock and rest.

No matter which cocoon you make
you'll fly away, when you awake.


Posted by Ginny Neil, The Singing Farmwife at 9:15 AM No comments:

Sunday is a day for remembering our blessings and worship.  So, on Sundays, I will post a blessing.  Today's is for Father's Day and for my husband, my father, my brother, and my brother-in-law who, each of them, do such an excellent job of Fathering.

A Blessing on Father’s Day

Men of tender courage, strong hopes and firm presence: When you see your world – and move into it – you model our God who refused to be aloof and insisted on bold, visible love. With your daily labor, you carve life from the soil of this world. Like God, you bring order from the wild chaos. You name the truth, and your love has the power to touch the deep places of our soul. You are a poet, a craftsman, a priest. You are necessary.
For the ways you take on the weight of this world – and shield others from it,
For the many times you surrender your desires for the good of family,
For your faithfulness to your marriage, in a world that knows less and less about fidelity and loyalty, less about love,
For the times when all you want to do is fling your weary bones on a couch but instead you wrestle or sit down for a tea party or toss a football,
For the moments you’ve fought to the bitter end for what you believe is true and right, even if you lost,
For those of you who bear the scars from your own father,
For those of you who have become father for another,
For sticking around,
For keeping your word,
For laughing – and for being able to laugh at yourself,
For teaching us how to tell the truth, how to say “I’m sorry” and how to cry,
We bless you.
May the God who filled Father Adam with life and who filled King David with wisdom, boldness and tenderness and who brought our Redeemer into the world to enact and demonstrate selfless love, fill you with all grace and joy today. In the name of the Father and the Son and the Holy Spirit. Amen.
thanks to Winn Collier for this blessing

Posted by Ginny Neil, The Singing Farmwife at 7:41 AM 1 comment: 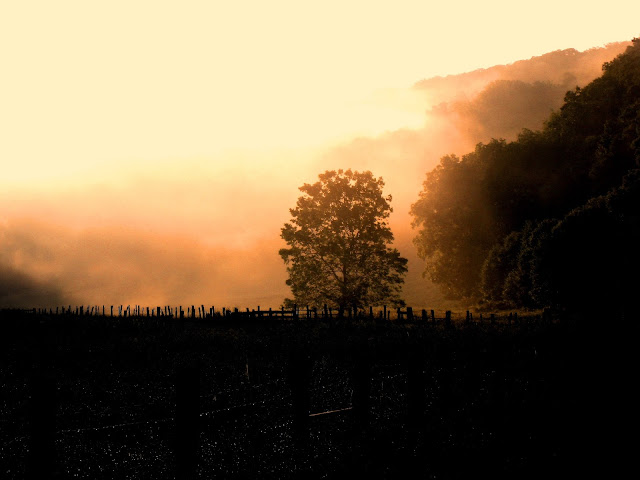 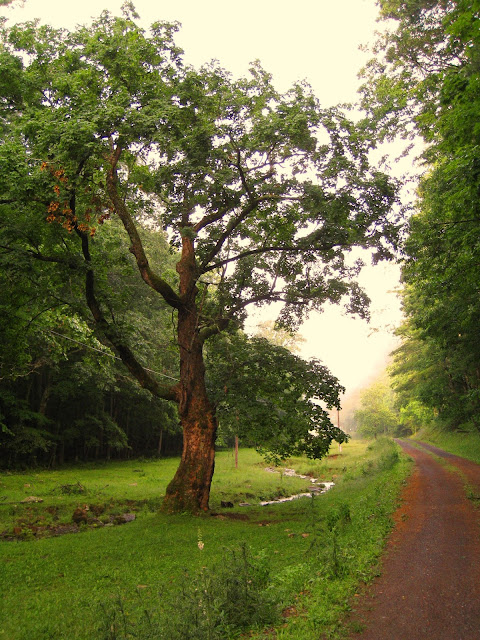 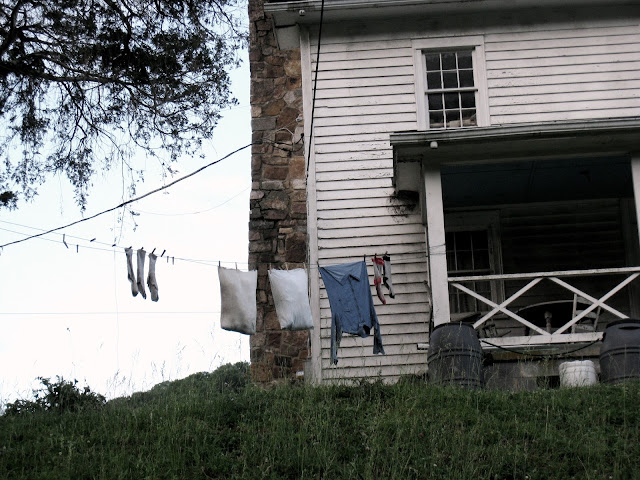 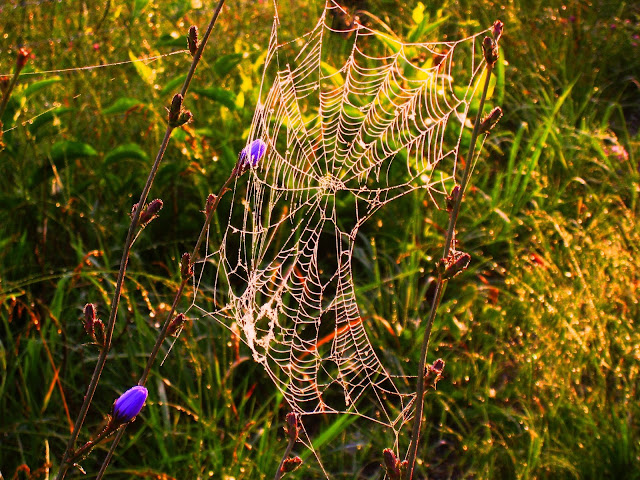 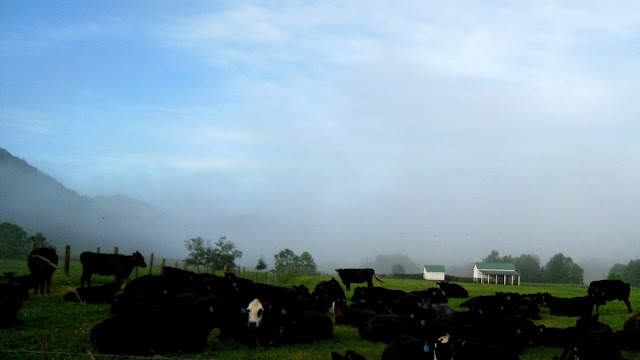 Posted by Ginny Neil, The Singing Farmwife at 6:30 AM No comments:

The weather has gone from pleasantly cool to unpleasantly hot and muggy.  Afternoons remind me of my childhood.  One of the joys of my early years was a week-long visit to see my grandparents at  Rosebower Farm in Dinwiddie, Virginia.  My grandfather raised milo, peanuts, and tobacco, and he also had a beautiful vegetable garden.
While I was there, we  spent mornings picking beans or strawberries or squash.  By noon, the temperature had often risen above ninety degrees so, after lunch, Nana and I would clean up the kitchen, and then we would take an afternoon nap.
She would strip down to her slip and lie on her bed with the newspapers.  I would go into the cavernous, cool front room, strip down to my tee shirt and underwear and lie down on the little daybed with a National Geographic.  There was no air conditioning, so the shades were closed against the heat of the sun, but the window was open and I would drift in and out of consciousness to the quiet hum of tractors running off in the distance or the nearer buzz of bees in the rosebushes.  My Papa would sit in his overstuffed armchair in the dark paneled den.  He always swore he didn't nap, but once I snuck out and found him with his chin on his chest.
When the still air picked up with an afternoon breeze, we would rouse ourselves from our sweaty stupor.  Papa would propose a ride in the pickup truck or a little jaunt to the farm pond for swimming or fishing.  The afternoon was re-energized by our siesta.
When I left Rosebower to go back home each summer, I left napping behind, too.  Nana continued to take a nap almost every day of her life until she died at the age of one hundred.
Now that I am retired, I have discovered the joys of napping.  I don't often stop for one, but when I do, I can almost feel myself right back on that little daybed at Rosebower, especially when it's hot and the bees are buzzing.  I have discovered that all the animals on the farm also stop what they are doing about mid-day and settle in for a shady snooze. 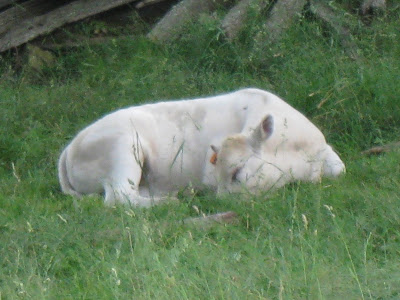 I think the animals are on to something.  I find it hard to give myself permission to nap every day.  It seems extravagant, wasteful and indolent.  But my grandmother, who was energetic to the end, obviously knew something that has been lost to our fast-paced, work-a-holic world.
It's time to stop and snore.  Research is showing that Americans don't get enough sleep.  I say it's time we took a lesson from Nana and the animals.  When I taught full time, afternoons were murder for me.  My energy levels dropped and my powers of concentration waned.  My natural cycle was begging me to nap.
I believe that today, I will pay attention to those urges.  I will put my feet up and honor the napping hour.  I hope you'll join me. 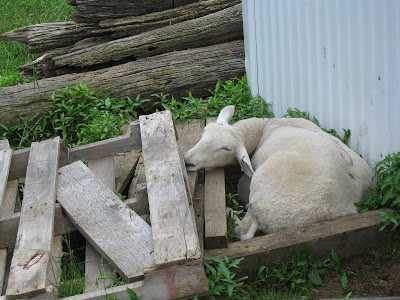 Posted by Ginny Neil, The Singing Farmwife at 2:14 PM No comments: