The Cow Poop Trail and Other Educational Wonders

I followed a brown cow splat trail for about three miles up the asphalt road in front of my house yesterday. A sure sign that the neighbors have been on their annual spring cattle drive, moving cows and calves from winter pastures. Highland’s valleys are too narrow for there to be much open range for cattle moving, so most people load them onto a truck and drive them to greener pastures. But, Mike and George-Ann prefer an old fashioned cattle drive, so they saddle up and bring the herd down the road. It’s a raucous trip with mama cows and their calves bawling as they lose sight of each other and humans hollering directions back and forth as they work to keep the bovines away from open gates and front lawns.
But, I don’t think those cows and calves were nearly as noisy as the ten girls from the city who came to visit grandparents this weekend. John and Jean entertained their granddaughters and eight of their friends as a special birthday gift for the just turned ten year old girl. Their back mountain adjoins us and as I was upstairs finishing some writing, I heard what I thought was a pack of coyotes carousing on the mountain. Turns out it was just a pack of excited ten year old girls walking down the backside to visit us. John and Jean’s grandchildren often come to see us when they’re up because we have a menagerie of dogs, chickens, horses and lambs to pet and feed and kiss and hug. The birthday crowd had hiked over to see what animals might be available for the city girls to visit. We have a bottle fed calf in the barn who was terrified by the shrieking, giggling, galloping crew, and the chickens got quite a workout running from long-legged girls in pink boots , but it was good fun to see the joy on the girls’ faces as they bottle fed the calf and gathered eggs.
Visits to the farm are important to city kids. There are so many things they don’t know about the food they eat. One of the little girls asked me if we had to give the hens shots to get them to lay eggs. Another asked if the steers out in the field were milk cows. When I first moved out here, I was every bit as ignorant. I once admired a ram in the field noting that “she had one of the biggest udders I’d ever seen on a ewe.” Turns out the thing hanging down between his legs had nothing to do with milk. And Joe used to take advantage of my ignorance. For the longest time he had me convinced that he grew a special breed of mountain cow whose legs were shorter on one side than the other to accommodate standing upright on steep hills.
I’ve come a long way. I can tell by the poop on the road which breed of animals has recently been herded by. I can tell the difference between orchard grass and alfalfa in a field from a moving car. I can tell the boy animals from the girl animals with one glance and just this morning I squeezed out a half a bottle full of milk from an engorged mama ewe so her lamb could nurse.
I’m blessed to have received my country education and glad to share it with others. The happy sound of children squealing as they tried to catch chickens or bent down to kiss the calf was the highlight of my day. I hope it meant as much to them. 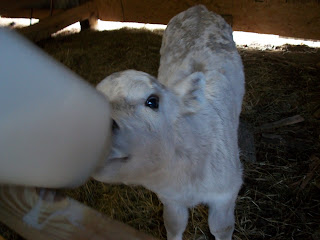 Posted by Ginny Neil, The Singing Farmwife at 3:22 PM No comments: Links to this post

This is the messiest time of year. Even though the days are warm we are still feeding the stove, but it’s dampered down which creates more ashes and they sift out every time we open it, leaving a pale powder on every table and dresser in the house which daily dusting can’t defeat. And, the cats are shedding. When Tip jumps up to perch on the arm of my chair, a flotilla of cat hairs drifts in behind him. Yesterday, he crawled into my lap and when he left I was furrier than my cat. Then, there are the tired houseplants. They’ve grown leggy in their search for sunlight and their dying leaves lie curled in fetal positions all around the pots.
Did I mention the mud? We’ve had steers around the house all winter and the thawing ground outside the white board fence is a quagmire. The chickens must be tended to twice a day and they live on the other side of this mess, which means we are constantly tracking dirt into the house. We also have a bottle calf in the shed so there’s a dirty bottle and mixing bowl to wash up twice a day and a bag of calf milk replacer on the mud porch ringed by a fine flour of powdered milk.
And yet, all of this mess is part of a promise. I heard the first whisper of it last night when Scott ran inside to tell me the peepers are singing. I stepped out into the starry night and stood on the sidewalk to listen to their spring choir. They sounded faint and far off, but the promise of warmer weather was there.
When God created the world he dug deep into the oceans and made piles of mud that He patted into mountains. And because there was no one there to say, “Don’t track that mess into the house!” He kept right on. His muddy mess was the beginning of a beautiful world. The muddy mess inside and outside my house is also a beginning. It’s a symptom of the birth of spring. 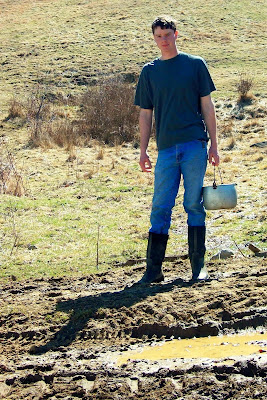 It’s the first week of March and the morning air tastes sweet. There’s white steam curling out of sugar shacks all across the county and in McDowell the rising column from Sugar Tree Country Store is pink in the early morning light. It’s been perfect sugar weather. Nights below freezing and days above. These are the temperatures that really put the trees to work sucking up the starches they’ve stored in their roots over the winter and sending them skyward as sugars to jump start spring growth.
My son Justin has been in the syrup business since he was about sixteen. That’s the year he and a friend collected enough sugar water to set up their own ramshackle sugar shack and boil until they had produced about 13 gallons of syrup which they then sold to visitors at our annual Maple Festival. It took about 500 gallons of water and 48 hours of work drilling, hanging, collecting, boiling and bottling to produce that small amount of syrup, but the boys were proud of their operation and were even featured in an article in the Washington Post about the county’s youngest syrup producers.
For the last two years, Justin has opted to just gather his water and sell it to other producers who will boil it, condensing it until it is light amber, sticky and sweet. This year, he hung 80 buckets in the sugarbush down on our farm in McDowell. Joe had to set up an electric fence to keep the cows away from it because they love sugar water and will walk from tree to tree nosing buckets and dumping as they drink. Justin gathers his water by hand , tipping the buckets into a 425 gallon transport tank which rests on the back of an old farm truck. It takes him about an hour each time he collects and lately the buckets have been brimful twice a day. The season is only a few weeks long, and farmers who work their sugarbush are boiling without a break so they can finish off as much syrup as possible before the trees bud out and the rising water gets sappy and off-flavored.
The smell of sweet steam is usually one of the earliest signs of spring here in Highland. So raise a jug of maple syrup and make a toast to warmer and sunnier days to come.