Hanging On by a Thread

Although I'm not always happy to see a spider, especially if I find her wandering around the kitchen, I am enraptured by the magic silk thread they spin.  Last spring, as I was perched on the hill above my house, I noticed glints and glimmers of light floating through the gold haze that signals afternoon is drawing to an end.
I watched intently as more and more of these shimmers wafted across the field in front of me. They were the tiny silk parachutes of spiderlings, who drifted, legs outstretched, dangling and swinging in the softest breeze. If you have read Charlotte's Web then you know that each baby spider journeys away from home on the slenderest balloon the air can move.
There were hundreds of them floating and landing, and two or three even ended up dangling from my hat brim before scurrying up and re-launching themselves. Now, if you hate spiders, you need to know that these creatures were no bigger than the head of a pin. Not very threatening at all.
Spider webs are the most amazing material. My research revealed that they are built from sequences of proteins, are stored as a liquid concentrate in the spider's abdomen, are stronger, when compared by weight, than Kevlar, and the common garden spider can produce up to seven different kinds. Silk that is resistant to bacteria, silk that is sticky, silk that is smooth, silk that is less brittle and so on.
But, it's the beauty of webs that captures my heart. I'll never forget the morning, twenty years ago, that I was walking up the side of a mountain. The fog hadn't burned off, and the sun was just brightening the world: a luminescence that briefly lit hundreds of spiral cobwebs spun in an old snag silhouetted against the lemon yellow fog. The webs, spangled with dew, looked like silver beaded necklaces and ornaments strung from twig to twig. I didn't have my camera, but I've spent the last twenty years prowling about with my camera on foggy mornings trying to find and capture that picture.
The following series of pictures were caught on just such a morning. The fog didn't hang around, but the webs did, and until the sun peeked over the rim of the hill, they sparkled with droplets captured from the mist. I didn't find that elusive shot of a silk decorated snag, but the webs are still much to marvel at and remind me of the exquisite care God took as he created this world. 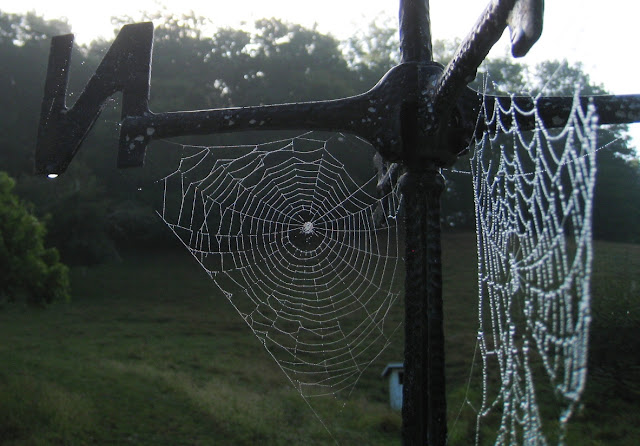 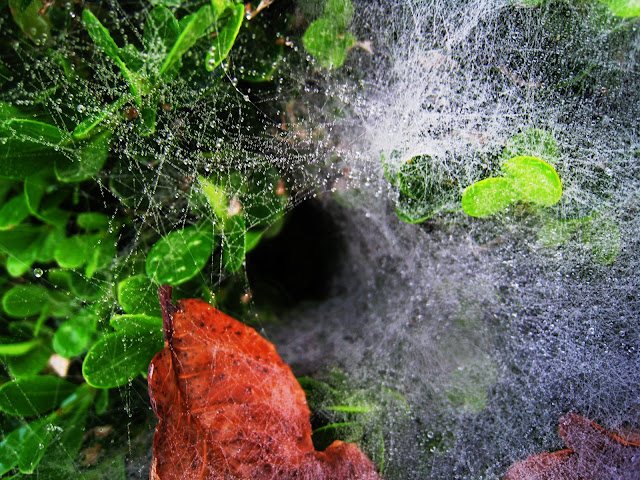 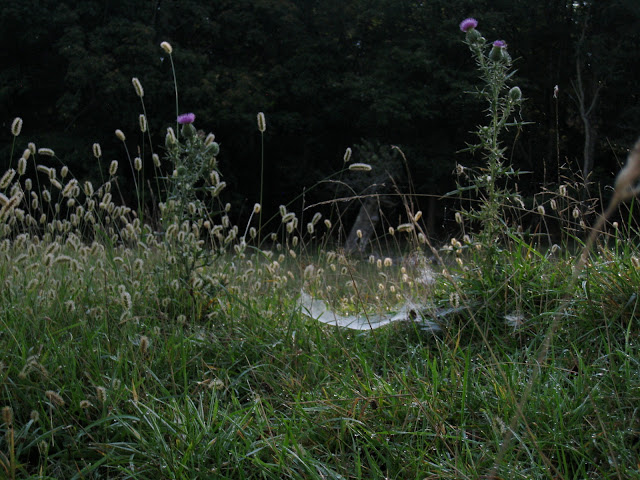 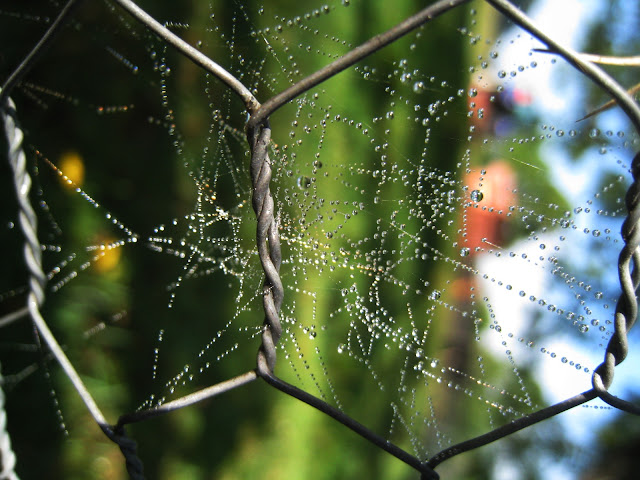 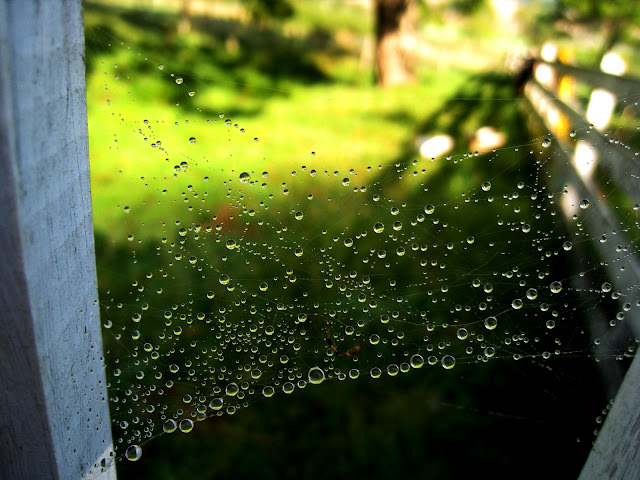 For the next picture, I waded through a field of tall grass to be positioned correctly for the rising sun. 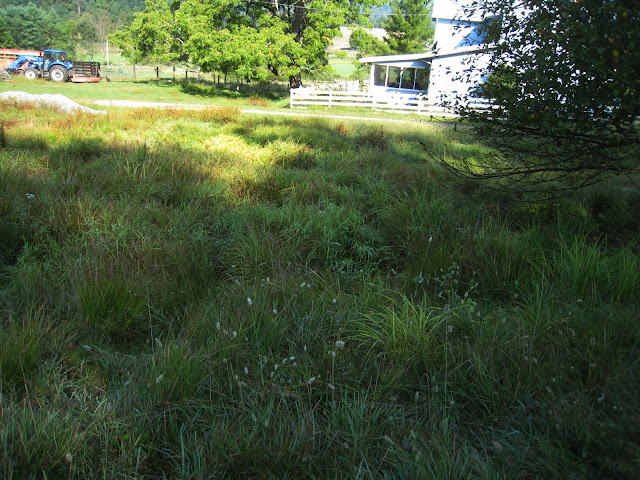 I couldn't see them until I stood still, but when I did, I counted 15 within arm's reach. 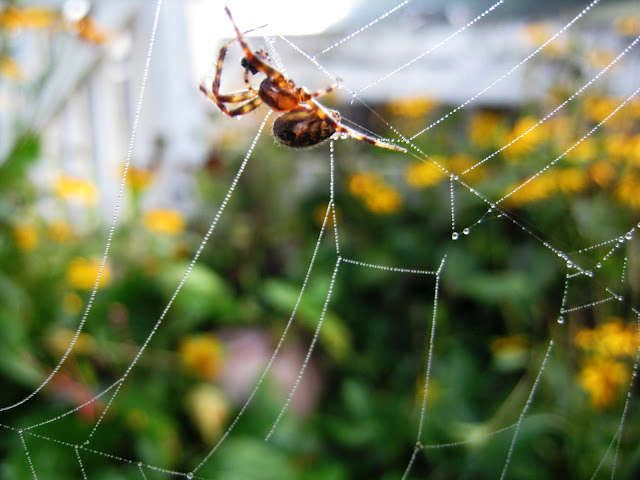 The architects of my favorite spiral webs, hard at work repairing damage done through the night of trapping and eating their supper. 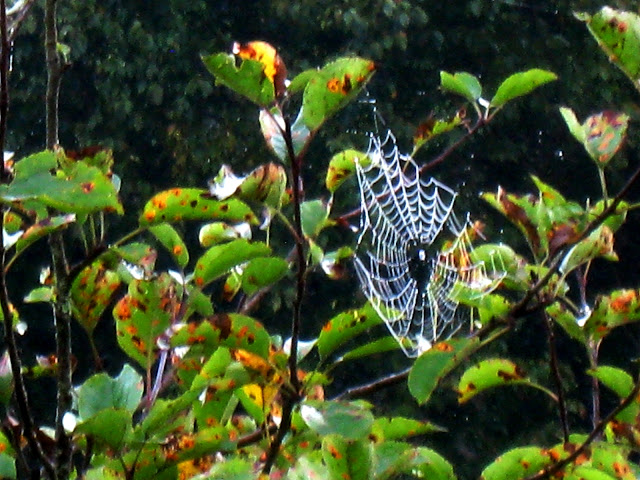 Intent on being in position to photograph this web just as it was lit by the sun, I had missed seeing what I was wading through. A little disconcerted, I was wearing shorts after all, I picked my way carefully back through the grass and managed not to disturb any webs or pick up any eight-legged hitchikers. The spiders were probably more relieved than I was when I made it back un-silked and un-spidered.
Although I didn't ultimately find the snaggy, silky picture I still dream about, I re-kindled my appreciation for how much of the world we don't see until we take time to stand still and notice.


x
Posted by Ginny Neil, The Singing Farmwife at 8:25 AM