Re-post of April 2012 because the more things change, the more they stay the same.....

Seven years ago, this was my post for today. Some things never change. The grass is greening and the animals are roaming...as always. And we are chasing them...as always.

This time of year brings out the worst in the cows and lambs.  They won’t stay where they belong.  I knew today was going to be an escapish kind of day when we went out at six thirty this morning to bring in the steers and heifers that were going to market.  Of course, they all romped into the pen for food, but they would not and could not seem to romp into the smaller pen where we were trying to corral them.  They whirled and kicked and bawled and ran past our outstretched arms.  Finally we had all of them in the sorting pen and Joe commenced to tapping rumps and sending various bovines in various directions.  He told me to stand in the gap and swing one way for all the animals except number 35.  She was to be sent into the smallest pen of all.  Well, I penned her and then when I turned to shoo away some other heifers she unpenned herself.  It went like that all morning.  Finally, we gave up, loaded up anything we could find and decided to sort things out at the Ag Center where the heifers were being sold and the pens are more suited for sorting.

On my way home from the sorting sortie, I saw one of our lambs in the road.  He was not too distressed about things until I drove up on him to try and gently persuade him to turn back toward the hole under the fence from whence he had crept.  As soon as I left my vehicle, the lost lamb ran as fast as he could north up the road.  The hole was south.  I jumped back in my vehicle, raced ahead of him, skidded into a neighbor’s driveway, jumped out and began to chase him back south.  When some kind friends drove by and saw my middle aged sweating self waving my arms and running pell mell up the road, they stopped to help.  The lamb dodged them and fled south past the hole, so they jumped in their truck and raced to get ahead of him, while I huffed and puffed back to my car and spun out of the driveway to keep him from turning north again.  It took all three of us to convince that little lamb to make the turn into the gate, but he is safe with the flock for now.  Until he decides to escape again. 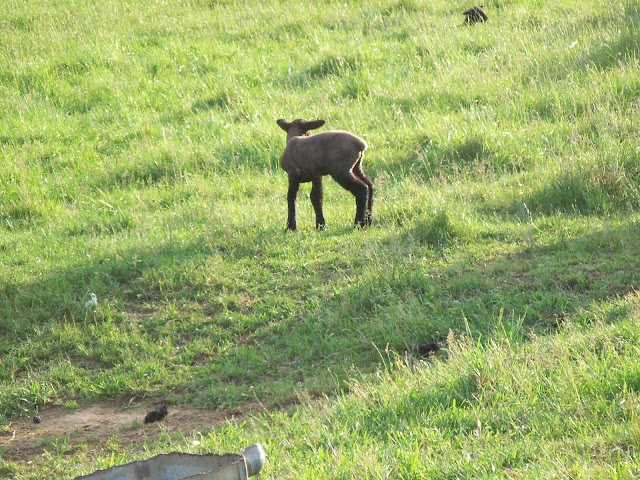 Then, when I got home from the chase, I discovered a message on my answering machine.  One of our cows was roaming town browsing on the flowers in our neighbors’ yards. 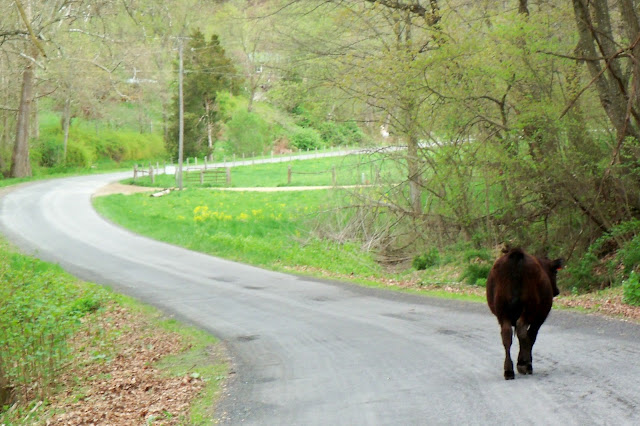 Justin agreed to go after her.  I think I’ll go up to my studio where there is no phone and no view of the road.
Posted by Ginny Neil, The Singing Farmwife at 5:04 PM