A Lot of Lambs and a Hardworking Man 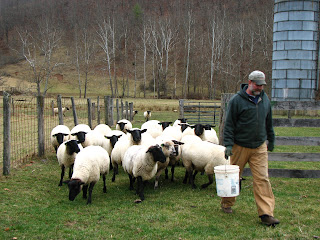 The moon is full and so are the barns.  That extra bit of moon-inspired gravity is hastening the lambing.  Fourteen ewes have dropped thirty-two lambs to the straw in the last week.   The barnyard is full of leggy lambs and Joe’s days are full of work.  He starts each morning with a trip to the lambing barn. That’s where the pregnant ewes spend their nights.  If there are new lambs, then Joe cleans out a stall, adds fresh hay for bedding, carries the lambs in, chases the mama in and then feeds some hay and grain. Sometimes there’s only one ewe nosing a lamb or two around in the straw, but other mornings there might be three ewes and six lambs all jumbled together.  They must be sorted out, but Joe has some tricks up his sleeve.  He pulls the similar looking lambs into separate areas of the barn.  The moms can identify their lambs by smell and sound, so they run around, sniffing and bleating until they’ve claimed their babies.  When all of the new families have been moved into stalls, the rest of the ewes are shooed out to the meadow where they are fed three gallons of grain and two bales of hay.
After his stint in the maternity ward, Joe visits the nursery.  Each stall in the bottom of our barn is divided in half to accommodate two sets of ewes and lambs.  He visits each stall, checking on the lambs and gathering up the black rubber water buckets.  After several trips to the water hydrant, all the mamas have fresh water.  Then Joe scoops up five gallons of grain and gives each ewe her breakfast.  If the lambs are new, he dips their umbilical cords in iodine to prevent bacterial infections.  If they are at least a day old and looking healthy, he bands their tails and testicles.  If they’ve been banded for at least a day, then each lamb is painted with a number to match mama’s ear tag. This makes it easier to sort them out later.
From the barn, Joe carries two five gallon buckets of grain out to the orchard lot.  That’s where the older lambs and ewes stay until they are turned out to pasture.  He dumps his buckets into the five sided feeders.  Then he fills a trough with water.  After that, Joe climbs into the hay mow and throws down six bales of hay.  When the ewes finish the last of the grain, they get two of the fifty pound bales.  If Joe is lucky, then that’s it for the sheep until suppertime, but more often than not, there’s a ewe in a stall who won’t nurse a lamb, so she must be tied and the lamb held in place to nurse.  Or there is a triplet whose mama didn’t have enough milk.  So Joe goes up to the house, mixes a bottle of milk replacer and then carries it back down to the barn for the hungry baby.
All of these things happen before Joe goes off to the shop for the day.  They are repeated in the evening, after work, along with feeding all of the cows.  No wonder my husband spends most of his evening after supper napping in his chair. 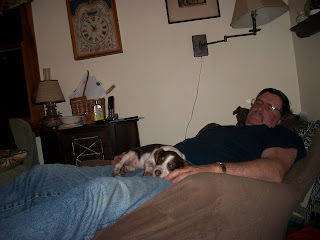 Posted by Ginny Neil, The Singing Farmwife at 3:30 PM